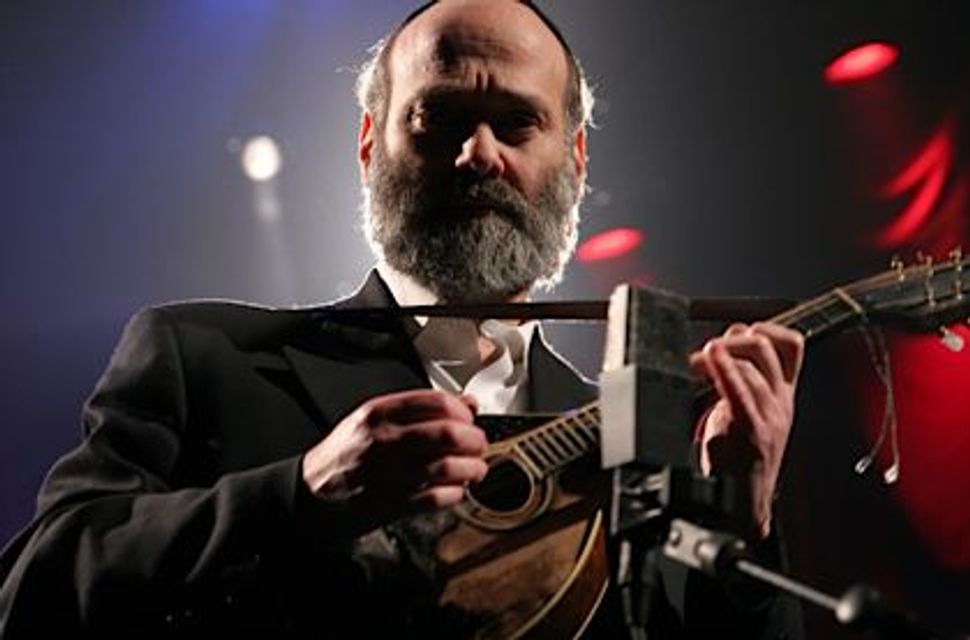 The version of “The Lord Will Provide” on “Old Brooklyn,” Andy Statman’s virtuosic two-CD excursion through all manners of American and Jewish music, struck me as unusual, and not just because the voice and clarinet duet is spine-tinglingly powerful. It’s more because the 18th-century hymn, written by James Newton — a slave trader who became an abolitionist and an Anglican minister — was being performed intensely, almost telepathically, by clarinetist Statman, an Orthodox New York Jew, and singer Ricky Skaggs, a born again evangelical Kentucky Christian.

Statman’s clarinet playing on the hymn is steeped in Old and New World Jewish music, while Skaggs’s singing is steeped in the a cappella gospel quartets that are such an important part of the bluegrass tradition. But, in “The Lord Will Provide,” Statman and Skaggs find a musical and spiritual meeting ground in Newton’s monotheistic sentiments — the hymn’s two overtly Christian verses are omitted — that allows both musicians to express themselves powerfully.

Statman is an unusual musician as a virtuoso on two dissimilar instruments — mandolin and clarinet — and in genres — bluegrass and klezmer — that came out of very different traditions. But though he’s deeply rooted in both bluegrass and klezmer, Statman’s musical pallet encompasses, blends, and goes beyond into jazz, blues, rock and roll, folk, country and world music, often in the same tune. The 25 tracks on “Old Brooklyn” travel through all of those genres, and more.

The musicians Statman surrounds himself with on this album are key to its versatility. His regular, highly creative rhythm section of bassist Jim Whitney and drummer Larry Eagle play on most, but not all, of the tracks. On many tunes the core band is augmented by master old-time fiddler and banjoist Bruce Molsky, legendary bluegrass fiddler Byron Berline and roots/jazz guitarist Jon Sholle. Other great musicians who show up include Art Baron on trombone and tuba, David Letterman band leader Paul Shaffer on Hammond B-3 organ, Lew Soloff on piccolo trumpet, Marty Rifkin on pedal steel, and Béla Fleck, perhaps the most creative banjo player in the world today. Every arrangement is approached on its own terms, using just the right combination of players. There are several pieces that Statman plays solo, there are duets, including the hymn with Skaggs, trios, quartets, and more. Some tracks feature seven piece bands.

Several pieces are distinctly Jewish. An arrangement of the traditional “Shabbos Nigun” is a beautiful duet featuring Statman’s clarinet in dialogue with Fleck’s banjo and seems to come directly from Statman’s Hasidic spirituality. Another traditional tune, “Mah Yedidus,” is a wild dance tune with Statman’s mandolin, Shaffer’s organ, and Soloff’s piccolo trumpet trading licks on top of Whitney and Eagle’s unrelenting rhythms. And, the original “Life Cycles” is a solo clarinet piece that speaks directly to the Jewish soul.

Among the many other highlights are a too-quick version of the bluegrass standard, “Long Journey Home,” featuring some very hot picking by Statman, Molsky and Sholle; a version of Ivory Joe Hunter’s “Since I Met You Baby,” featuring Statman’s bluesiest mandolin licks and some trombone and tuba playing by Baron that would put the arrangement right at home at Preservation Hall; and “Ocean Parkway After Dark,” which I can only describe as something the Ventures would have played if they were slightly naughty boys from Brooklyn.

There is an incredible range of music on these two CDs. All of it demands the listener’s full attention and rousing applause.

Watch a trailer for ‘Old Brooklyn’: