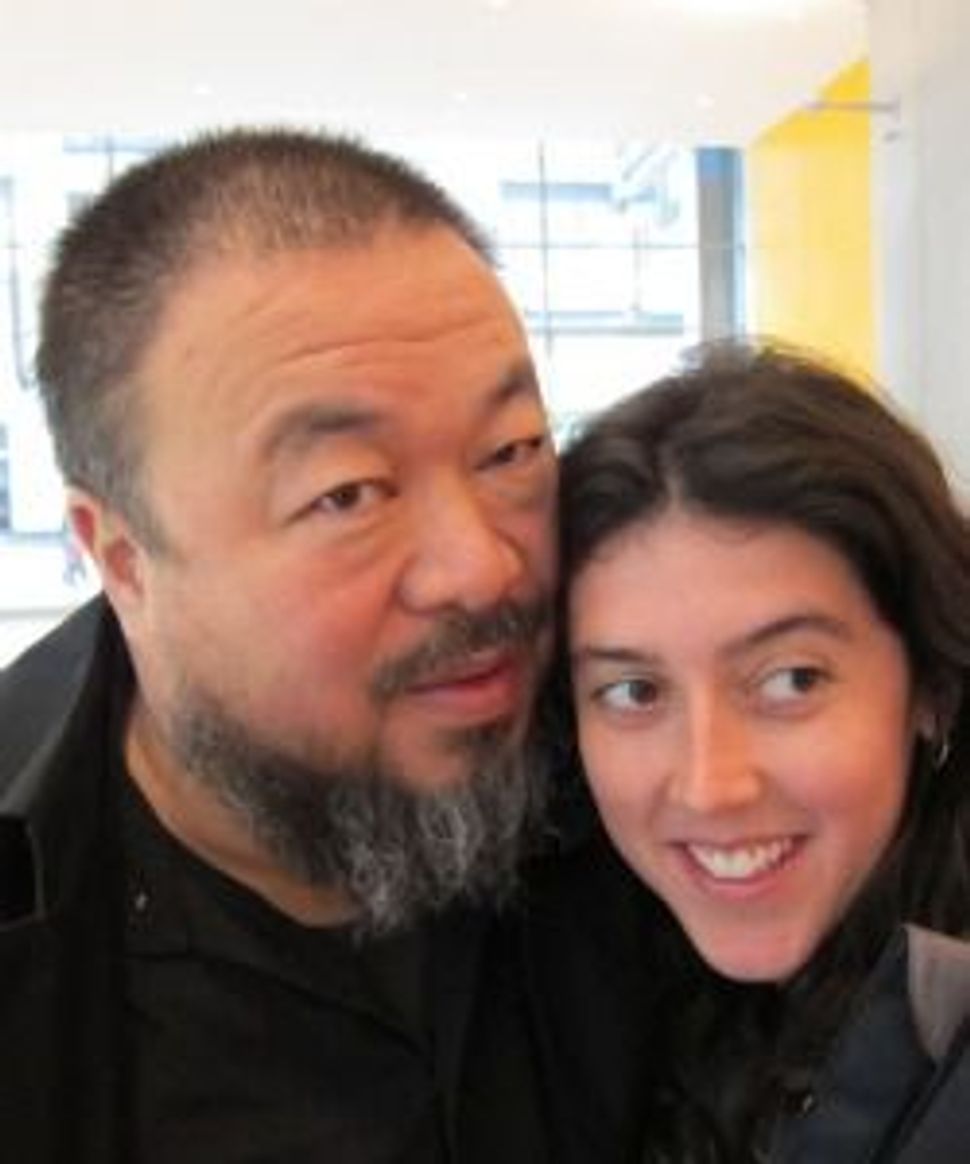 Activist Artist: Filmmaker Alison Klayman talks about bringing the story of Chinese dissident Ai Weiwei to the big screen. Her ?Never Sorry? is showing at the Sundance Film Festival. Image by courtesy of alison klayman

Having grown up in suburban Philadelphia, born to a Yiddish-speaking mother, Alison Klayman is a surprising conduit for China’s most famous dissident artist. In between many jobs, including writing for this newspaper (and interviewing the Chinese about their knowledge of Jews and Judaism before the influx of visitors for the 2010 Olympics, for JTA), she spent three years documenting the life, art and activism of Ai Weiwei. Klayman spoke to the Forward’s Dan Friedman shortly before the premiere of her documentary feature, “Never Sorry,” at this year’s Sundance Film Festival in Park City, Utah.

Dan Friedman: You’ve been in America working on the film. Have you seen Ai Weiwei since he was arrested April 3 and then released 81 days later?

Alison Klayman: I last saw him in September. I was still able to go over there with my old visa. He’s on Beijing arrest, so he’s not allowed to leave the city for a year from when he was released.

But they recently announced a major American show for him in 2012. How did he arrange the show while under city arrest?

Yes, he’s going to be at the Hirshhorn [Museum] starting in October. While I was over in Beijing there were curators coming every day to see him. The truth is that even though this still is a tricky time where he is supposed to have restrictions about the kinds of things he can talk about and see, work on his art, in theory, is not one of them. He just has to provide the police with a list every week of people who came, and the curators are on that list.

Was the earthquake in 2008 in Sichuan province the turning point for Ai in his activism?

That was an important popular moment, asking for transparency from a government that wouldn’t even name the children who were killed, but his biography was political before then. His photographs from his decade in the States were disproportionately of protests. There were rolls and rolls of the Tompkins Square riots.

He has said to me that where he is now traces back to 1993, when he came back to China from the States and made a decision to say what he wants to say and to not back down.

In terms of turning points, though, 2005 is when he first got his blog; he really didn’t use the Internet before then. The use of the Internet — because it’s a giant megaphone — put him on this track.

He has multiple audiences. He has domestic friends on Twitter who like to converse with him and be kind of vulgar, and curators from Tate Modern. On his blog he just put up pictures of his daily life, sometimes intensely private, kind of gross pictures from hotel bathrooms when he’s in Europe for a show… [and] long essays about art. But what really spoke to people was the mix of his life and these thoughts on art, photography and architecture, and then it became politics, current events and society.

The Israel debate is so sticky, and it’s difficult to take a position on it. Is it a relief to know that in China you are on the right side?

I went to Jewish day school, and my mom was born in Israel but moved when she was 6. She always wanted to give her kids a Jewish education, which is why my brother and I speak better Hebrew than our parents. A lot of my classmates moved to Israel to live or to stay there for a little bit. I do think going to China felt pretty far off the radar from the area where I came from. Although more and more people are going there, I was probably not ahead of the curve, but one of the earlier ones to do that.

I do think Israel is a big mess, and I’ve always had a big block. I don’t even know how to approach it. I’ve only been there two or three times, but I actually went there for some weddings this summer and for the first time thought that maybe I could approach it somehow. I do think it’s important not to just cover your eyes and say, “La-la-la, I don’t want to deal with it!”

As a filmmaker, I said: “Maybe I don’t have to be afraid. Maybe there is just so much that needs to be told here.”

Definitely there’s a feeling of implication that I don’t have with China, but I wouldn’t say that I approach China only as if I have no connection there. Every day I’m there and I breathe the smog, I think that this is because of all the cheap stuff I bought in the States.