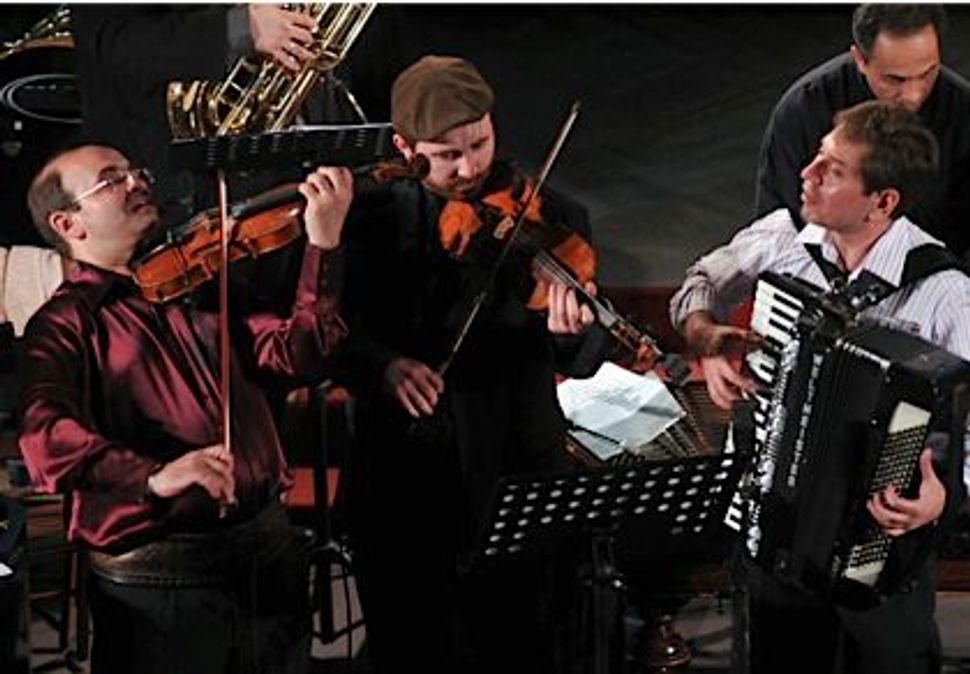 The Other Europeans’ impressive new live album, “Splendor,” should carry the subtitle “Everything You Wanted To Know About Klezmer and Lautar Music But Were Afraid To Ask.” Would you bet on your ability to differentiate klezmer from so-called “Gypsy” music in a simple drop-the-needle listening test? Before this recording, even those of us who had our horas and doinas down pat might have squirmed if asked to describe, in precise musical terms, the particular characteristics that set these two Eastern European musical traditions apart.

“Splendor,” aside from being a blast to listen to, is also a fascinating educational primer on two distinct cultural strains that made up the ethnically mixed urban music of pre–World War II Bessarabia (today’s Republic of Moldova). In the same way that Yo-Yo Ma and the Silk Road Ensemble have explored the ancient musical connections between Western Europe and the Far East, Alan Bern and The Other Europeans have zeroed in on a period during which klezmer and lautar (Roma, or “Gypsy”) musicians played together in mixed ensembles for both Jewish and non-Jewish audiences.

As Bern, a pianist, accordionist and founding director of Yiddish Summer Weimar, explains in an introduction to the album, these mixed groups were well-versed in both traditions and tailored the style of the music to the expectations of each crowd. “For a contemporary American comparison,” he writes, “one can think of a tune like ‘Amazing Grace’ as performed in a white gospel church or a black gospel church — the ‘same tune’ but played very differently, reflecting the sensibility of each community.”

The trouble is that World War II put an end to all that, and the klezmer and lautar traditions diverged. With no surviving recordings or arrangements from the golden years in Bessarabia, Bern set out to get experts from both camps collaborating again, and The Other Europeans project was born.

“Splendor,” a two-disc set (with an astounding 14 pages of liner notes, available online) is the result of research funded in part by a grant from the European Union and involving 14 top-notch musicians and at least half a dozen musicologists. Within the band are what Bern calls “sub-ensembles” of a handful of players each — one specializing in klezmer music, the other in lautar — but the real fireworks fly when members of the two groups come together, reimagining the mixed ensembles that died 60 years ago.

In the middle track of “Klezmer/Lautar Suite #2,” The Other Europeans present what they boast is the only instance of a trombonist (Dan Blacksberg) performing a badkhones, or traditional Yiddish wedding declamation. After Blacksberg’s freewheeling recitative, they launch into a hora with the triple rhythm stretched out at an unusually deliberate pace. The slower tempo allows the group to emphasize the plaintive resignation that so often lurks just below the surface of upbeat dance tunes. One particular chord change, led by Mark Rubin’s tuba stepping resolutely upward as the violin and clarinet crescendo, provides one of many goosebumpy moments in which The Other Europeans really seem to have revived a special way of blending two musical styles that are related but distinct.

Another such moment comes at the start of “Klezmer/Lautar Suite #3,” when trumpeter Adam Stinga plays a distant, improvisatory doina over shimmering accompaniment that sounds like something out of a dream — or an Old Hollywood rendering of one. Led by the sighing accordion and peripatetic cimbalom, the whole ensemble seems to vibrate like one giant, fabulous harp.

This is a rare album that rewards listening with the liner notes open. There are plenty of familiar tunes here, but where other groups are content to merely label them as “traditional,” Bern and fellow researchers Diana Bunea, Adrain Receanu and Kalman Balogh go to great lengths to describe the provenance and performance history of each. A slinking klezmer melody performed with a heaping dose of saucy pitch-bending by clarinetist Christian Dawid, for example, comes with a precise pedigree: “This melody was first recorded by Belf’s Romanian Orchestra in 1912 as Dem Rebns Gavdule (the rabbi’s havdole) but the more well-known recording by Dave Tarras was called Sha, sah di shviger kumt (Quiet, quiet the mother-in-law is coming) in 1925.”

Many of these suites follow the same basic structure — a slow, rhapsodic solo followed by a steady, moderate-tempo dance transitioning into a blisteringly quick, no-holds-barred rumpus — and it’s the miniature music histories that make their nuances stand out. Listen long enough and you’ll come to the exhilarating realization that you’ve begun to appreciate the kind of musical subtleties that absolutely confound Pandora.

That’s not to imply that The Other Europeans are merely archivists, or that “Splendor” is the sort of thing you ought to listen to in a library. With equal parts old-world longing and the infectious rhythms that inspire mid-afternoon dance parties, this is an album to help you relive a raucous Saturday night out on a humdrum wintry Tuesday. And many of the group’s arrangements of familiar pieces are quite surprising. “Khaiterma,” a wedding tune described in the notes as “a Yiddish interpretation of a Crimean melody originally in 7/16,” for example, is stripped down from the usual dance-band treatment and presented as a refreshingly sparse and jazzy duet for Matt Darriau on clarinet and Mark Rubin on slap bass. (The effect would have been sexier if Rubin’s bass weren’t so out of tune — but this is a live album, after all.)

In terms of sheer virtuosity, accordionist Petar Ralchev and cimbalom whiz Kalman Balogh are the recording’s clear standouts. Ralchev’s solo in the middle track of “Lautar Clarinet Suite #1” is both technically flawless and brilliantly expressive and, after a moody improvisation at the start of disc 2, he rounds out the “Lautar Violin/Accordion Suite #1” with a flurry of passagework played more quickly than seems possible. Balogh is a formidable presence throughout, contributing rich textures that well up from and then recede back into the ensemble’s sound. In the second half of the “Lautar Trumpet Suite #1,” and particularly in the wedding song from “Lautar Suite #1,” the cimbalom sheds any hint of twee hammered-dulcimer politeness and thrums along like an uncommonly nimble banjo.

There are times, too, when Ralchev, Balogh and the other soloists seem to throw down the gauntlet, churning out increasingly acrobatic licks and challenging the rest of the group to keep up. It is in those moments that the band’s exuberant sound transcends its carefully researched history and bursts forth into the ephemeral present. Regardless of whether or not the music sounds anything like what the klezmer/lautar ensembles played before they were silenced, we don’t need liner notes to tell us what we’re hearing now is unquestionably alive.

Watch the trailer for a forthcoming The Other Europeans movie: