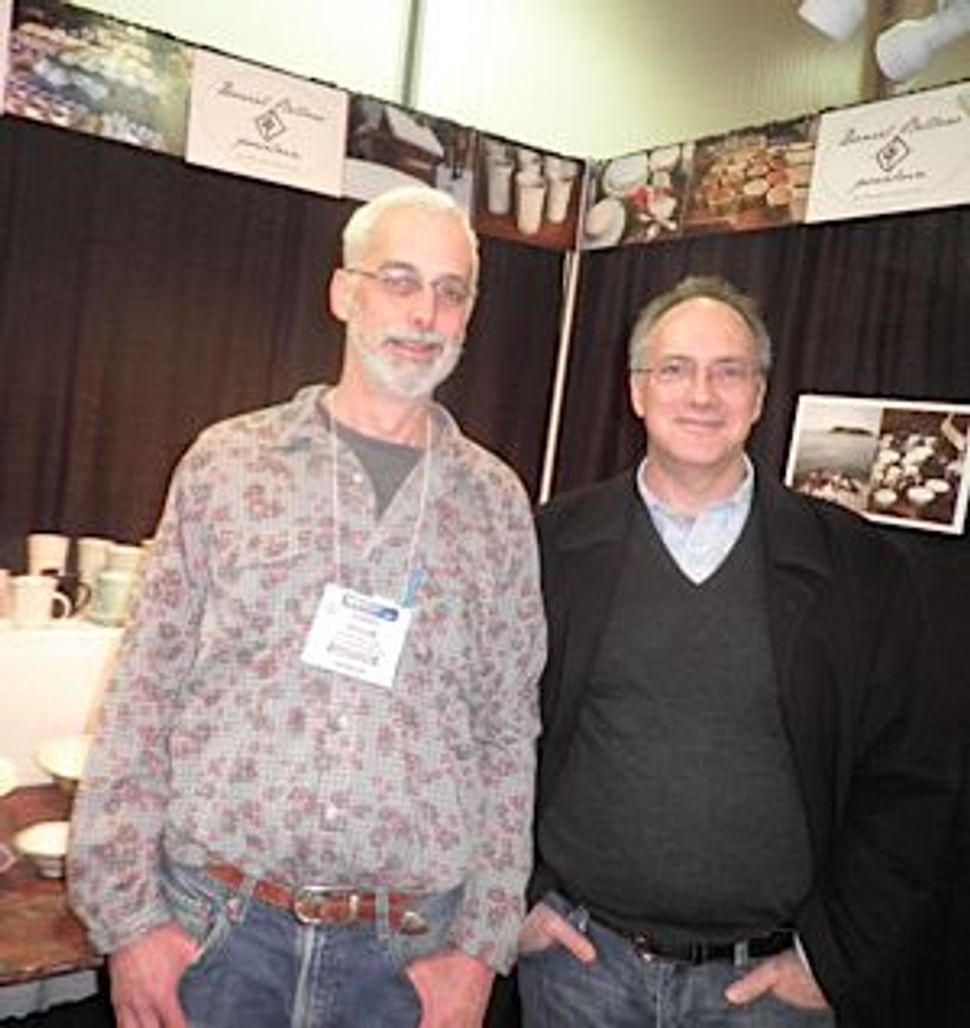 Bellow’s interest in pottery dates to when he was about 15. He had walked into a pottery studio at his prep school, Northfield Mount Hermon, where he said he had been “sent to when I was having too much fun in New York during the CBGB punk rock days.”

“There was this big, hippie dude spinning pots,” he recalled. “A semicircle of teenage girls were sitting around in amazement.” Bellow remembered thinking, “I have to have this.”

Over time, he got to know Tom White, a mentor and friend who works in Northfield, Mass. “I became the kid who hung out in the studio,” he said. “I would spend time there on Saturday night. It fundamentally got me through high school.”

Bellow has himself become a mentor to others: He is teaching a workshop in March at Wesleyan Potters in Middletown, Conn. “It was a hobby that progressively got out of control,” said Bellow, standing in front of work radiating rich colors.

Bellow is as experienced at words as he is at pottery. He was a beat reporter for the Hudson Register Star and Berkshire Eagle and became an editor at the Rutland Herald the Stowe Report. He wrote about cowboy poetry for the Bostonian, the alumni magazine for Boston University.

“My graduate school was being a reporter on a small paper,” he said. In one notable investigative piece, Bellow broke a story about a county dump that was spewing pollution near a reservoir that supplied drinking water.

Bellow comes from a line distinguished for its writing. His famous father, Saul Bellow, handed him “David Copperfield” when he was 11 and said, “Read this.” Kipling, Conrad, Tolstoy and Dostoevsky followed. In his published letters, Saul Bellow said that his son Daniel had “grown up to be literate and bookish.”

Daniel Bellow learned to leave his father alone after breakfast. The Nobelist first worked in a room in the house, then in a perch above a barn, and then in a writing studio that was a shack in the woods. “He kept moving farther away from the house,” Daniel said.

Daniel Bellow recalled: “My newspaper writing was just the kind of troublemaking my father relished. If he didn’t see my byline, he would call me.”

The Javits show has been kind to Bellow. At his first show, he met a buyer from the company Anthropologie, and his work began to appear in many stores. At the latest show he pointed to pieces whose ancient glaze recipes originate in the Far East. His booth sat among a myriad of nearby offerings, such as the Utah-based company Sugarpost, which makes flying pigs out of propane tanks and turtles out of army helmets.

Bellow’s pottery ranges in price from $15 (one shot glass) to about $300 (a salad bowl). He said that of late he has become bored with things that are just round. Now, some of his pieces look square on the outside but are round containers inside.

On a recent appearance on WFCR on New England Public Radio, Bellow related an unusual dream, in which President Obama came to see his pottery studio. It was may have been just a dream, but if Obama does decide to check out Bellow’s pottery, he won’t be disappointed.