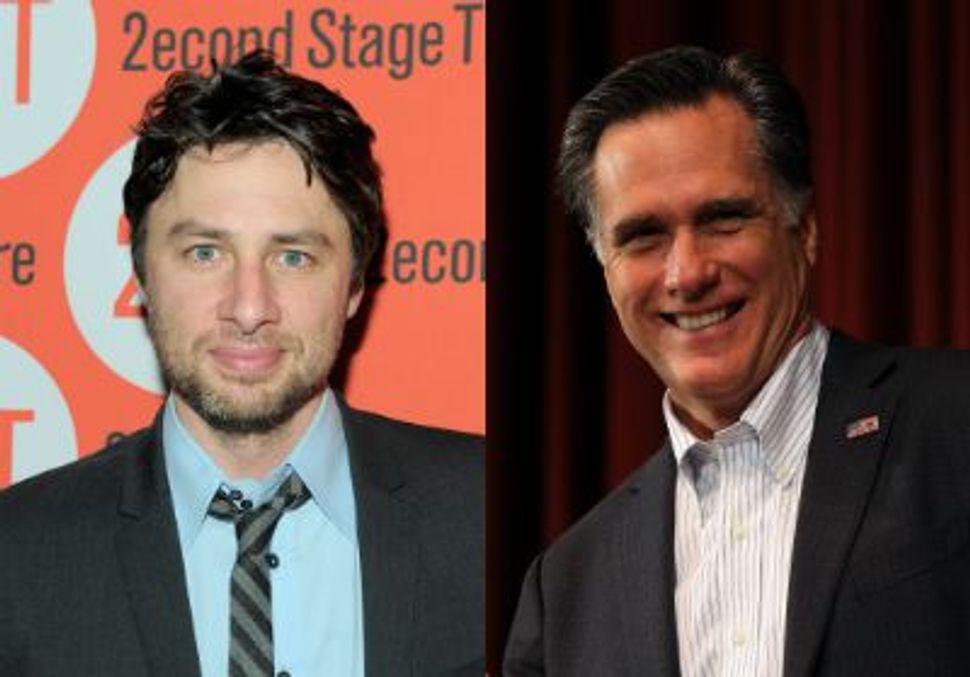 Zach Braff, in England right now for the premiere run of “All New People” (his London stage debut — plus, he wrote the play) is surely enjoying the present moment. But it turns out that his past — at least his family’s past — has something to do with another play: “The Crucible” by Arthur Miller.

It seems that the Jewish Braff is related to the Mormon Presidential candidate Mitt Romney…by way of a Puritan Protestant. That Protestant is Rebecca Nurse, who was falsely accused of practicing witchcraft in the infamous Salem witchcraft trials. She was hanged in 1692. Miller made Nurse a central character in his play about the trials.

Braff’s mother, who converted to Judaism, is from an old New England family. According to Nate Bloom’s “Celebrity Jews” column in JWeekly, some amateur genealogical sleuthing revealed that both Braff and Romney are direct descendents of Nurse, making them very distant cousins.

It seems that Braff was not completely overjoyed when he got wind of this yichus news. Making light of it, he posted on Reddit: “So I guess I’m related to Mitt Romney through a witch. Family reunions just got a little crazier.” He later added “Mitt Romney and I have nothing in common,” and “Incidentally…buying a broom later today.”

There’s no word yet from Romney on this newfound knowledge that he has Jewish relations from Jersey.