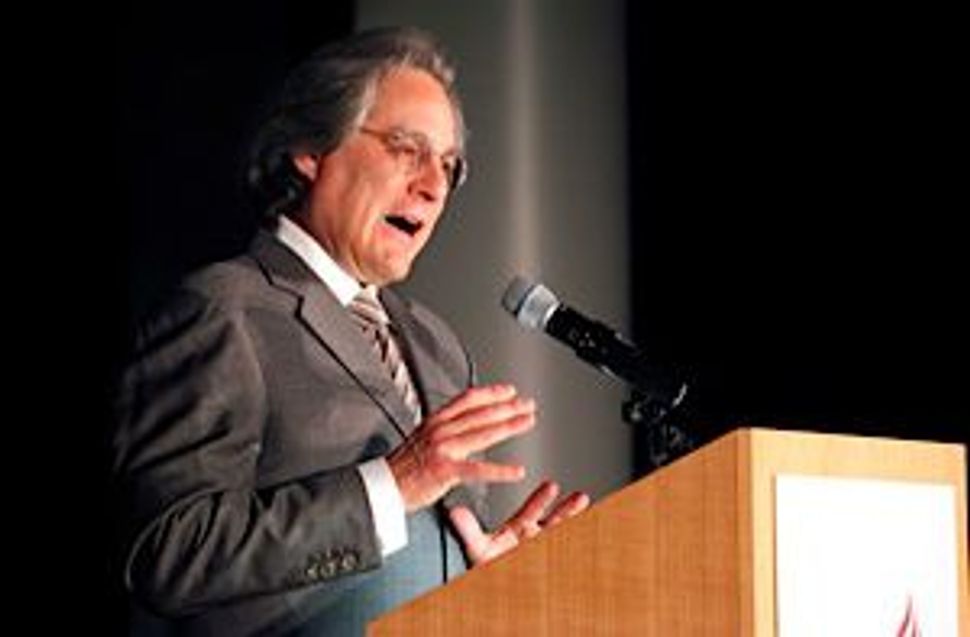 Image by Courtesy of the National Museum of American Jewish History

Laura Goldman: Could you describe your first meeting with Springsteen?

Max Weinberg: The ad in the Village Voice caught my eye because it said that the band had a Columbia Records contract. That was more than I had. To get to the audition, I had to climb up four long flights of steps with my drum. After I arrived tired and sweaty, Springsteen greeted me, “How are you doing? Let’s play.” I knew half way through the audition that we clicked.

My mother’s older sister Sadie and her husband worked for Thomas Edison. My aunt described it as working for a great man. That is how I feel about working for Bruce.

During the concert, your eyes never leave Springsteen. Why?

I call it the “pride before the fall” episode. On August 16, 1975, we were playing a club in Greenwich Village that is not there any longer, called the Bottom Line. In those days, we played two shows a night. Our second show was going to be live on radio station WNEW-FM. Between shows I was scouting the club for a potential close, impersonal relationship. I found a smoking hot girl. I started playing to the girl. She was picking up the beat. Bruce was ready to stop but I was the only one that missed the signal to stop. He finally stopped me by taking the drumsticks out of my hand and then pretending to choke me. Needless to say, he was not in a good mood.

Bruce had given everyone in the band nicknames. Mine was Mighty Max. When he introduced the band during “Rosalita,” which was broadcast live on the radio, he introduced me as the Not So Mighty Max. After the show, I knocked on his dressing room door to apologize, feeling like a third grader called to the principal. I have never taken my eyes off since. You never know what Bruce will do on stage.

What does drumming mean to you?

When I’m playing my drums, I feel connected. I feel good about myself when people are enjoying themselves. Their happiness is my happiness. As Bruce would say, “Dancing over your troubles.”

If people forget their troubles for a short time while listening to my drumming, I am performing Tikkun Olam, healing the world. It is a mitzvah.

What can you say about your experience with Conan O’Brien?

I did 3,500 shows with Conan and have the scars to prove it. He reminds me of the parable: He got what he wanted, but lost what he had. He thought the grass was greener before midnight. He made a rash decision to blow up his career and did not care about the collateral damage.

What did you learn from the incident?

Listen to your wife. When we moved out to Los Angeles, my wife wanted to rent. I said let’s buy. It is “The Tonight Show.” What can happen?

I have been married to my wife Becky for 30 years. That is pretty good for someone in my business.

Can you tell me about your connection to Judaism?

For me, being Jewish means that you are not alone, you are part of a community that will always be there for you. When I was on Conan, Max Weinberg was emblazoned on my drum. I got a lot of attention and support from the Jewish community.

You had a chance to tour the National Museum of American Jewish History. What was most interesting to you?

My parents ran a Jewish summer camp called Pocono Highland. I found a book filled out by one of their campers. I was so blown away that I called my mother from the museum. I asked her if she remembered the camper. She said, “Of course I do. But don’t ask me to recognize her.” My mother, 92, is coming to the concert tomorrow night. The only concession that she will make to age is that someone will drive her. She is going to visit the museum also.

What advice would you give to someone starting out in the music business?

No matter the path, the journey has to start with a “hungry heart.” If you have a vision for your life, make it a reality. Work everywhere and anywhere. When the E Street Band was disbanded, I took bar mitzvah gigs so I could play the drums. Springsteen started out playing bar mitzvahs. I consider Springsteen the greatest bar mitzvah band of all time. You have to see Bruce leading the audience in Hava Nagilah.