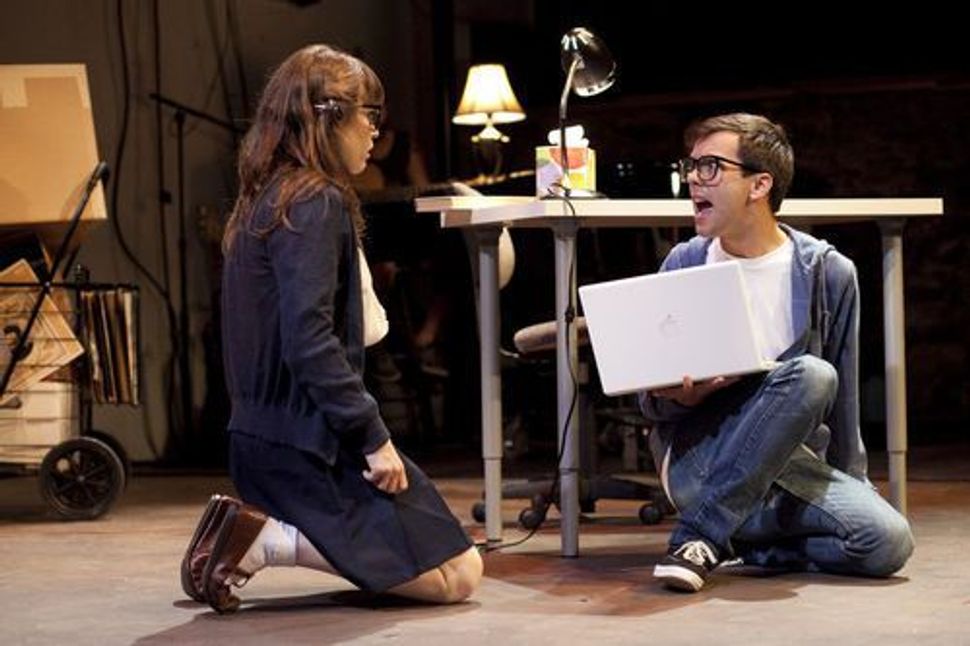 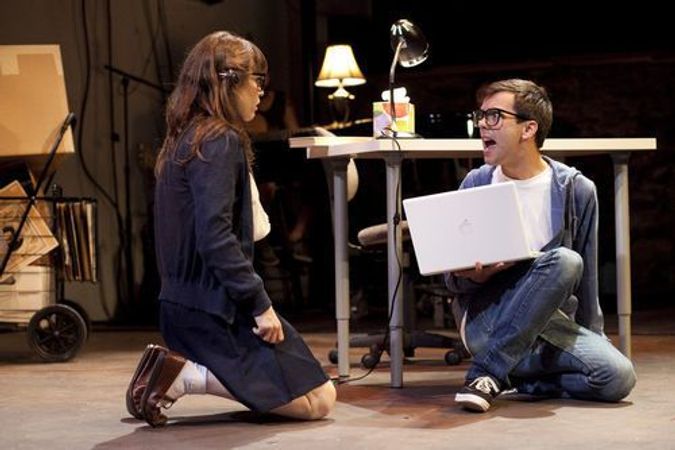 Though Fishback, a 30-year-old playwright, performance artist and 2007 recipient of a Six Points Fellowship for Emerging Jewish Artists, cautions that the play isn’t strictly autobiographical, “The Material World” draws inspiration from his family’s socialist roots. His great-grandfather was sent to Siberia after the 1905 revolution and, following a daring escape from Russia (hidden under a train car, according to Fishback family lore), found his way to the Bronx and became the chief compositor of the Forverts. As girls, Fishback’s paternal grandmother and her two sisters were members of the Young People’s Socialist League, and were raised in a household where the prominent socialist writers of the time stopped by to debate politics around the kitchen table.

A fourth-generation activist, Fishback demonstrated against the Iraq war as a college student in the early 2000s, following in the footsteps of his father, who was involved in the civil rights and anti-war movements of the 1960s and ’70s. “I grew up thinking Martin Luther King Day was a Jewish holiday because we celebrated it in shul,” Fishback told the Forward in a recent interview. Political commitment was valued so strongly among his family members and their circle of friends, he said, that he grew up viewing the revolutionary spirit as more essential to Jewish identity than religious belief. “My grandmother sort of humored my parents by joining our synagogue,” Fishback said, “but she would turn to me in the middle of a service and whisper, ‘God doesn’t exist.’” (Her sister was Ruth Barcan Marcus, the noted philosopher and logician who died in February.)

The second in a trilogy of plays Fishback began during his Six Points Fellowship, “The Material World” is, in many ways, a loving tribute to Fishback’s activist grandmother, and to her generation of secular leftist Jews. The play’s protagonist, Gittel Fenster, is an ardent 12-year-old socialist who cuddles with Marxist texts and begs her parents to take the family back to Russia — where she imagines that, united in revolution, “no one is alone.” Though Gittel’s earnestness draws laughs (“How can I dismantle capitalism when I keep having all these feelings?” she wails in a pitch-perfect adolescent lament), her fervor is infectious.

Fishback admits to “problematic nostalgia for a moment in history when people felt a lot less need to compromise with their enemies,” and says that the play is, in part, a celebration of that old hardline attitude at a time when the future of American Jewish leftism is uncertain. In Fishback’s fictional boarding house, a place where the rules of time and space are cheerily ignored, Gittel wanders upstairs to chat with the young neurotic activist Ian Fleishman (the protagonist of Fishback’s previous play, “You Will Experience Silence,”) about what he terms a “hangout revolution” in 2011 Egypt. As Ian hunches over his laptop in an effort to build support for his cause on the internet, Gittel asks why they can’t go outside and start their own “hangout revolution” immediately. One can’t help wondering what role, if any, she might have taken in the Occupy Movement.

And where does Madonna fit into all of this? Fishback sees a link between her devotion to Kabbalah study and his grandmother’s commitment to socialism. “They’re both strong women who are trying to use some kind of dogma to save the universe,” he said, adding that “The Material World,” like “You Will Experience Silence,” is a play not so much about politics as what he calls the “psychology of social justice.” What Madonna, his socialist grandmother and other activists share is ambition — and just enough arrogance to think that they can change the world. “I love super-ambitious type-A personalities,” Fishback said. “There’s something about Madonna’s driven-ness that I find inspiring and helpful.”

To-do lists, a favorite tool of the super-ambitious, make frequent appearances in the play: In one memorable scene, Madonna, wearing little more than a lipstick-red leotard and leopard-print heels, advises cardigan-clad Gittel on how to achieve goals both big and small. What separates effective activists from ordinary folks, it seems, is that their to-do lists include imperatives like “topple capitalism” and “mend the broken universe” tucked in between more mundane items like “do the laundry” and “get married.” Or, as Fishback put it another way: “You’re either a person who has your shit together and can make a decision and author your own life, or you’re a person at the mercy of the universe, who’s just flailing and letting the world happen to you.”

It’s not tough to guess which camp Fishback falls into. As an undergraduate at the University of Pennsylvania, he had no patience for fellow students who wouldn’t cancel their brunch plans to join in his anti-war demonstrations. He devised his own major, focusing on “how people talk about themselves” and wrote his senior thesis on gay teenage Internet culture from the 1990s. Cheese On Bread, an anti-folk band that he started as a joke with friends in the school cafeteria, went on to tour two continents and put out two full-length albums. Since moving to New York in 2003 in what began as an effort to “get art out of [his] system and then get back to real work,” he’s made a career as a performance artist and playwright; been compared to Tony Kushner, and been awarded a handful of prestigious grants and fellowships, including a current post at NYU’s Hemispheric Institute for Performance and Politics and previous residencies at BAX/Brooklyn Arts Exchange, Yaddo and the MacDowell Colony. So when he says that, of all the characters in “The Material World,” he identifies most with Madonna and her obsession with productivity, it’s easy to believe him.

That’s not to say that he’s above writing a joke at her expense: In one of the play’s raunchier scenes, Madonna and her Kabbalah pupil Britney Spears rub themselves against the sacred Zohar with sighs and moans that call to mind the throes of a more familiar, earthly type of passion. Still, Fishback is quick to acknowledge that, in all seriousness, he finds the text-centric nature of Judaism — the “idea that books are so important that we have to touch them with our bodies” — to be one of the most appealing aspects of the faith.

And even if Kabbalah and communism aren’t your cup of tea, there are still plenty of good reasons to see “The Material World,” which plays every Friday and Saturday through the end of July. It’s got Yiddish in it, for one, with translations provided by former Folksbiene artistic director Eleanor Reissa. A veteran performer, Reissa also takes a funny, heart-breaking turn as Gittel at 90, a quick-witted grandmother as likely to rattle off a Borscht Belt-style joke as she is to admit she’s outlived her friends — and, to a certain extent, the promise of a socialist utopia. Fishback’s talents as a songwriter are on display throughout, but nowhere more than in the musical’s second act, when he tosses out a spectacular vaudevillian show-stopper that wouldn’t seem out of place in a glittering 1970s drag show.

Without spoiling the surprise, here’s a hint: The diva who sings it isn’t Madonna.