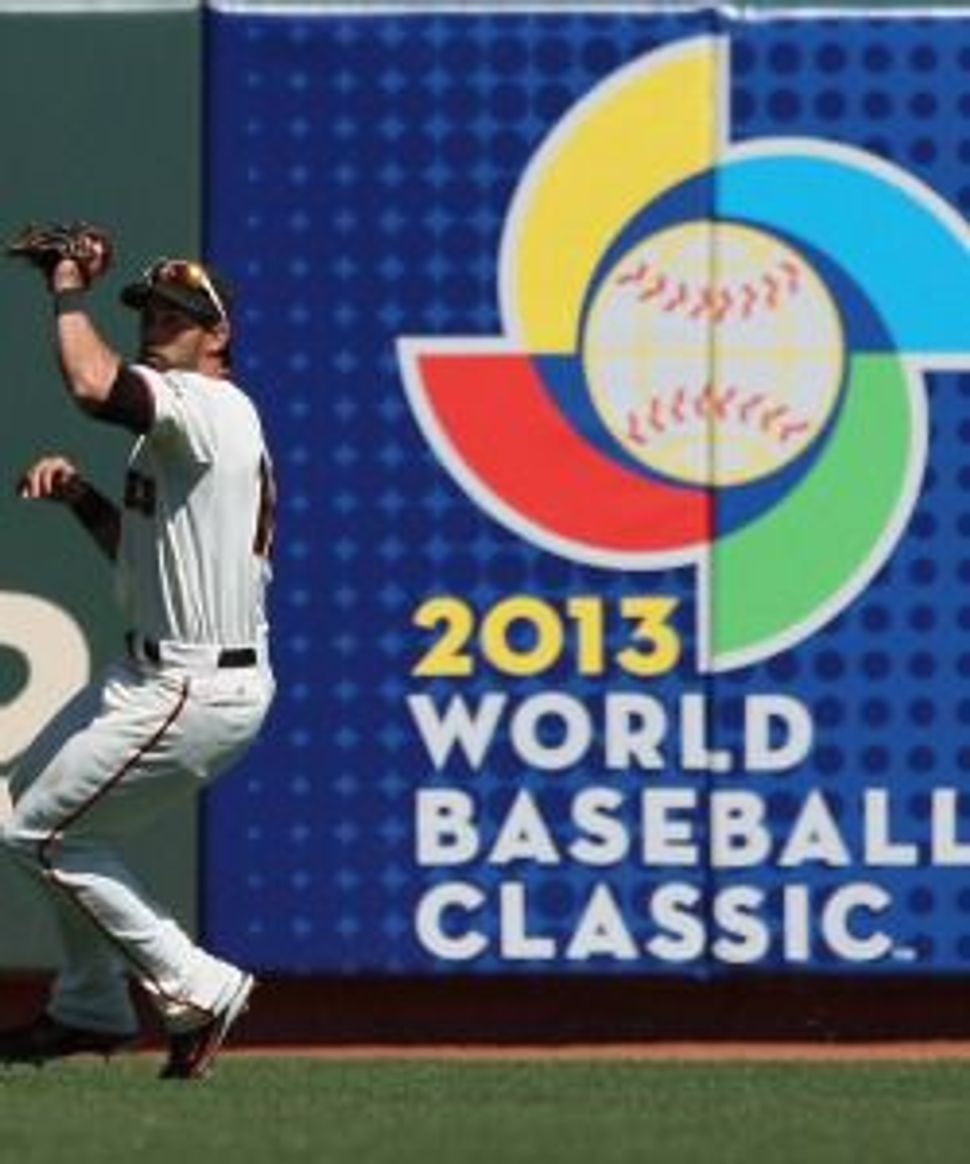 The history of Jews in baseball is inexorably tied to the High Holidays, with the stories of Hank Greenberg attending Rosh Hashanah services in Detroit in 1939 before playing for the Tigers (with rabbinical approval) and Sandy Koufax’s refusal to pitch the first game of the 1965 World Series on Yom Kippur standing out as two of the most famous moments in Jewish baseball history.

During these Days of Awe, an unlikely team will look to add its own chapter to that legacy.

With a 7-3 win over South Africa on Wednesday night in Jupiter, Fla., the Israeli national baseball team opened the qualifying rounds of the 2013 World Baseball Classic. Roger Dean Stadium will play host to the qualifying tournament between Israel, South Africa, Spain and France, with the winner advancing to the 16-team main tournament in March, along with three other qualifiers (powerhouse baseball nations like Japan, the Dominican Republic and the United States are pre-qualified for the event).

Under the rules of the WBC, any player who qualifies for Israeli citizenship is eligible to play for Israel, with the result being that the team that will compete under the Israeli flag in Jupiter this week (and in March if all goes well) is more of a Jewish team than an Israeli one. Former All-Star catcher Brad Ausmus is managing the Israeli team, which could be the first step toward the big-league managing job that has been predicted in many quarters since the Dartmouth alum retired from the game. He’ll be aided by retired major leaguers Shawn Green and Gabe Kapler, who will serve as player-coaches for the Israeli team – Green went 2-for-5 as the designated hitter on Wednesday – and Chicago White Sox third baseman Kevin Youkilis has said he’ll play for Israel at the WBC in March if the Israeli team qualifies.

With the MLB season still ongoing, though, Youkilis and any other Jewish ballplayers who might care to represent Israel are otherwise occupied, leaving a contingent of minor leaguers to play for Israel this week in Jupiter. That doesn’t mean that the Israeli side is short on talent, though, as the Israel roster includes several intriguing major league prospects, including one with major league experience in Josh Satin.

Satin, a sixth-round pick of the New York Mets in 2008 after a standout collegiate career at the University of California, is hitting .286 with 14 home runs and 60 RBI this season for the Buffalo Bison, the Mets’ affiliate in the Triple-A International League. He was recalled to the Mets for one game earlier this year, and played 15 games for the Mets in 2011. Satin has been named an “Organizational All-Star” in the Mets’ system for the last two seasons by MiLB.com, the official website of Minor League Baseball, and was a Double-A All-Star last season with the Binghamton Mets. Listed as a catcher on Israel’s official roster, Satin is a first baseman in Buffalo and has played at second base for the Mets, but wound up playing third base for Israel on Wednesday night, going 1-for-3 at the plate with two walks and scoring a pair of runs.

On Wednesday, however, the star of Israel’s victory came from the other side of the infield, as first baseman Nate Freiman blasted two home runs. An eighth-round draft pick of the San Diego Padres in the 2009 MLB draft, Freiman hit 24 home runs this season for the Padres’ Double-A affiliate, the San Antonio Missions of the Texas League. Freiman hit .298 for the Missions and drove in 105 runs, continuing his steady climb up the ranks.

In the outfield, Detroit Tigers prospect Ben Guez went 0-for-4 on Wednesday, but could be Israel’s most intriguing talent. A 19th-round selection of the Tigers in 2008 out of the College of William and Mary, Guez started the season with the Erie Seawolves in the (Double-A) Eastern League, and hit .308 with three home runs, 11 RBI, 22 runs scored and four stolen bases in 26 games before earning promotion to the International League, where he plays for the Toledo Mud Hens (of MAS*H fame). In 82 games for the Mud Hens, Guez has hit .284 with six home runs, 37 RBI, 43 runs scored and 11 stolen bases.

The pitching staff includes the native Israeli contingent, led by 35-year old Dan Rothem – the first Israeli to play NCAA Division I baseball (at Gardner-Webb university) – along with 33-year-old Shlomo Lipetz (formerly of the University of San Diego) and 23-year-old Alon Leichman, who is playing junior college ball in California after completing his military service. They’re joined by some big arms from the U.S. – literally, in the case of 6-foot-7 hurlers Brett Lorin of the Mobile BayBears (Double-A Southern League) and Max Perlman of the Stockton Ports (A-Advanced California League) and 6-foot-5 Josh Zeid of the Corpus Christi Hooks (Double-A Texas League). The leader on Wednesday, however, was Eric Berger of the Columbus Clippers, who pitched three scoreless innings to pick up the win, while Lorin, Zeid, Lipetz and two other pitchers combined to go the rest of the way.

With the win on Wednesday, Israel moves ahead in the double-elimination tournament, and will return to Roger Dean Stadium on Friday at 1 p.m. ET to face the winner of Thursday’s game between Spain and France. Spain entered the qualifier as the favorite, ranked 18th in the world, but Israel, as unlikely as it may seem, is quickly showing itself to be a force to be reckoned with in the baseball world.