What To Do (That’s Jewish) on Christmas 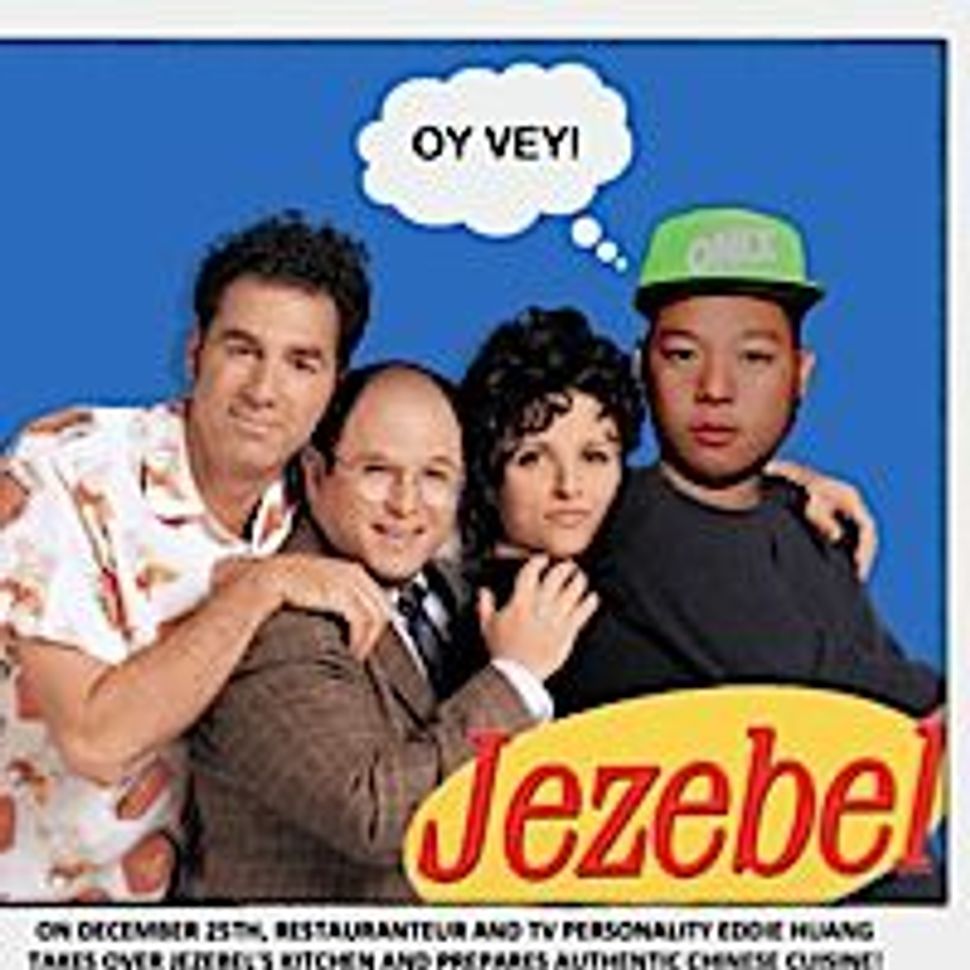 Image by Courtesy of Jezebel

Sure, you could sit at home with some lo mein and grab an action flick. But Christmas is far from a wasteland for Jewish events. From gorgeous kosher dinners to trivia night for nerds to clubs full of Jewish singles, we’ve rounded up something for everyone.

Dance Around the Matzo

Jewish singles, rejoice. The annual Matzoball takes place on Christmas Eve, and it’s one of the biggest matchmaking events of the year, or a good place to do some serious dancing. Hosted by the Society of Young Jewish Professionals, these ragers take place in clubs across the country. This year, there’ll be Matzoballs in New York City, Miami, Boca Raton, Toronto, Boston, LA, Philadelphia, and D.C.
Go to matzoball.org for more details.

Chow Down with Eddie Huang

If you’re in Dallas for Christmas, you can test your pop culture mettle against the geekiest Jews in the land at the booze-soaked trivia night “Geeks Who Drink.” From Star Trek to The Big Bang Theory, Geeks Who Drink hit on all your nerdy favorites, with plenty of beer to go around. The best part: It’s free.
Geeks Who Drink, At the Texas Theatre on 12/24 at 8:00 pm.

Celebrate Jewish-Asian Christmas Eve at The Queens Kickshaw in Astoria with a grand party prepared by chef Chichi Wang. Besides the plentiful food, you’ll be able to bid at a Chinese auction and join in on a game of Mah Jong. Past feasts have included ginger matzo ball soup, spring roll blintzes, and wok-fried bagel strips. Woks and Loks also promises “Bar Mitzvah-esque” partying, so bust out those robot moves, ladies.
For more information go to woksandlox.com

Ever wonder about the workings behind all those flashing Santas and strung-up Christmas lights? Take an adventurous walk around San Francisco and learn more about some of the city’s light displays. The walk includes a section on experimenting with light color mixing and animation, so you can bring some ideas back home.
Meets at Dolores Park; Christmas Day, 6:30 pm

Laugh and Chow Down

A group of dedicated Jewish LA comedians including Roseanne writer Monica Piper throw a Christmas Eve Chinese food extravaganza at the Genghis Cohen restaurant, a celebration now in its 6th year. Nosh on some traditional American-Chinese cuisine with a Jewish twist, like the Krisy Kanton Knish and the “New York Style” deli meat-filled eggrolls while Wendy Hammers hosts a sing-a-long along with, who promises “Gelt but no guilt.”
For more information go to Wendy Hammers.

Check out where Barbra Streisand got her start and activist Emma Goldman lived, and, of course, the haunts of the beat poets and Bob Dylan. Work off some of those winter calories and learn about the Jewish history of Greenwich Village with NYC Discovery Walking Tours.
Call 212.465.3331 for more information.

Dance Your Tuchus Off

Hit Hell’s Kitchen for Jewbilee, a huge gay dance party on Christmas Eve. Now in its 6th year, the Jewbilee is a chance to meet other gay Jews and hear the stylings of DJ Steve Sidewalk while sipping on a cocktail. And don’t worry if you want to bring along a non-Jewish friend: The invitation includes “Goy-Toys.”
For more information go to www.myhebro.com

Party in the Museum

Head to the National Museum of American Jewish History in Philadelphia for a free day of family fun. Wander through the final days of spiritual painter Tobi Kahn’s exhibit Sky & Water and then head downstairs for some fun and games. There’ll be music, games, children’s activities, and an appearance by the “family-friendly dance party sensation” Baby Loves Disco. Everyone wins!
Go to NMAJH for more details.

Tired of those incessant Christmas carols blaring from every speaker? Take a breather and hum some Broadway tunes at the Fiddler on the Roof sing-a-long, free at the Jewish Community Center of Northern Virginia. For once, you won’t get yelled at for humming along to the movie screen.
Email [email protected] for details

Hang Out With The Man In Black

If the holidays have left you in need of a drink and you’re in the Chicago area, you should probably head down to Delilah’s in Lincoln Park for a special screening of the Johnny Cash Show. Cash’s excellent guests performers — Andy Kaufman, Bob Dylan, and Tom T. Hall — sound like the kind of jukebox that your coolest friend had growing up.
Call 773-472-2771

What To Do (That’s Jewish) on Christmas