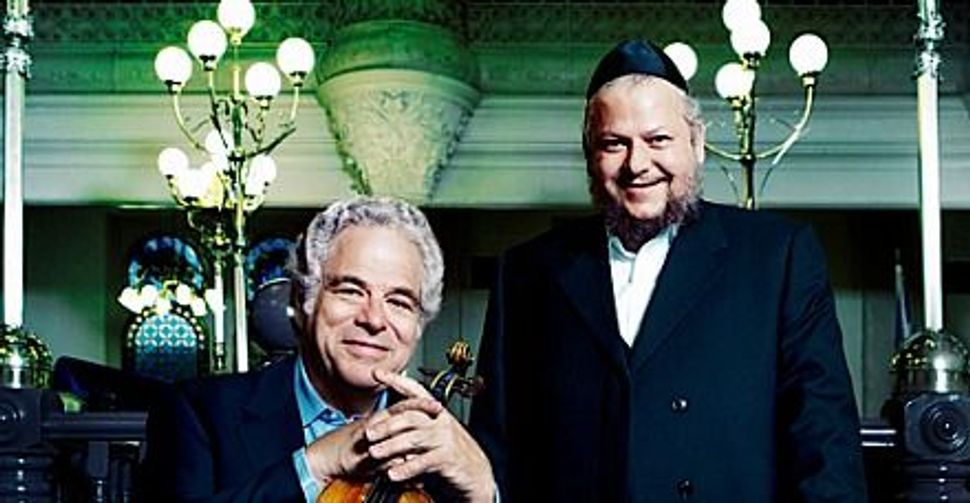 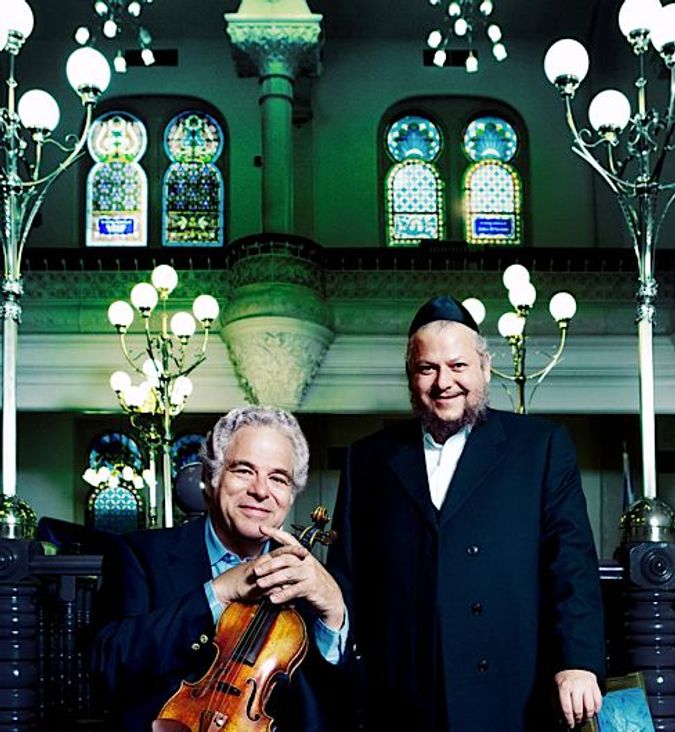 When Itzhak Perlman and Cantor Yitzchok Meir Helfgot take the stage of the Hollywood Bowl this evening for the latest stop on their Eternal Echoes tour, audience members who are not fluent in Hebrew, Yiddish or Aramaic will be able to follow the lyrics via English supertitles projected on giant screens located on both sides of the stage. This is all thanks to Hankus Netsky, the tour’s musical director and founder of the Klezmer Conservatory Band of Boston (KCB).

Netsky spoke to The Arty Semite yesterday en route to his hotel from the airport in L.A. in a van packed with his KCB bandmates, who will join members of the Los Angeles Philharmonic in the concert.

Netsky spent two weeks perfecting the supertitles for the repertoire, which includes cantorial selections, as well as Yiddish art songs and tunes from the Yiddish theater.

“One of the first things I said when the Eternal Echoes tour began was that we have to have supertitles because it’s like opera and it’s got to be treated like opera,” Netsky told The Arty Semite. “I think super titles will contribute a lot to the audience’s appreciation of this material.”

The super titles are synced to a piano/vocal score that Netsky had to create because only an orchestral score existed. Although translations of the lyrics had been done for a booklet included with the Eternal Echoes album, Netsky has to translate the lyrics for a few numbers that are not on the CD, including “Yiddishe Mama,” “Sholom Aleichim,” “Adir Hu” and “Moshe Emmes.” This was done “phrase by phrase.”

Netsky says he’s not sure what prayers will look like as supertitles.

“That could be interesting.”

He’s also curious how a 10-minute musical selection whose only lyrics are one small paragraph will work as supertitles.

“I think it really makes you think about the music and why lines are repeated. The answer is that this is tone painting.”

The concert tonight at the 18,000 seat Hollywood Bowl marks the first use of supertitles for the tour, Netsky said, because previous venues didn’t necessarily have the technology to show them. One exception was the Barclays Center concert in Brooklyn, where a largely black hat audience on “Helfgot’s home court” was presumed to be fluent in Yiddish and Hebrew. In recent months Perlman and Helfgot have performed in Boston and Toronto, as well as on the public radio show “A Prairie Home Companion.” Next spring they’ll perform at venues in Illinois, Florida and Georgia where super titles are likely to be shown.

An invitation only audience comprised of public television supporters will get to hear the Eternal Echoes repertoire in a Manhattan TV studio this fall during a recording for the “Great Performances” series. Though no air date has been announced, Netsky expects Perlman, Helfgot and their cadre of klezmer and chamber orchestra musicians to tour internationally after the PBS broadcast.