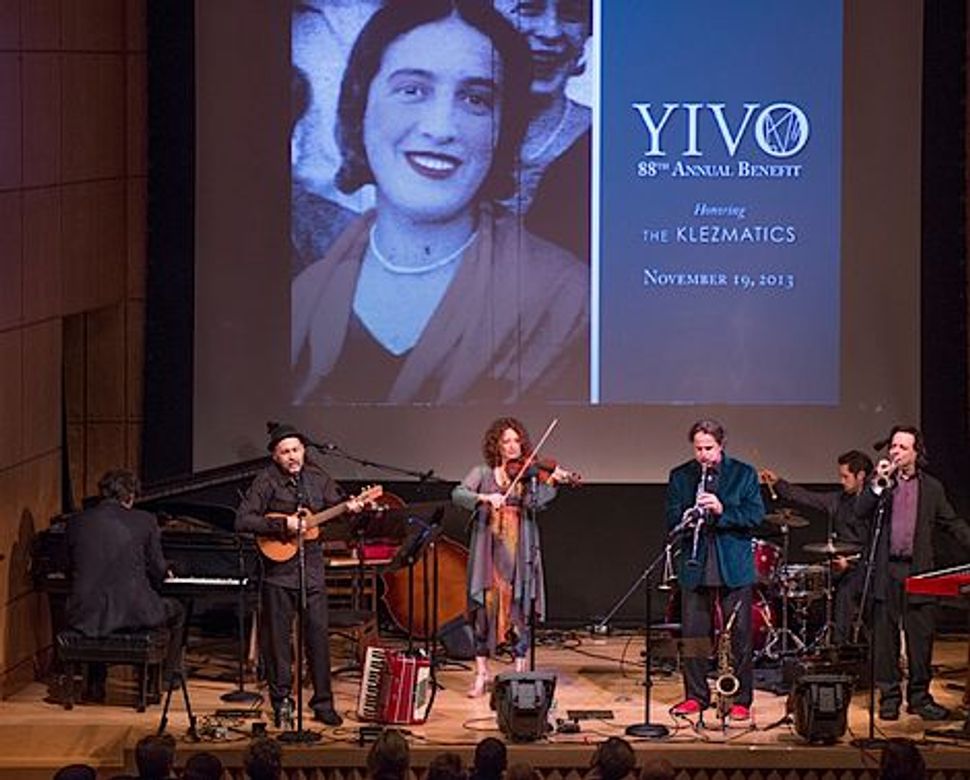 In the mid 1980s several key figures in the klezmer revival movement had day jobs at the YIVO Institute for Jewish Research. So, perhaps it was only fitting that The Klezmatics were given a lifetime achievement award at YIVO’s Manhattan headquarters November 19. After cocktails and dinner at the Center for Jewish History’s atrium on West 16th Street, the band performed a lively set in an auditorium after being introduced by Jeffrey Shandler, chair of the Jewish Studies department at Rutgers University. 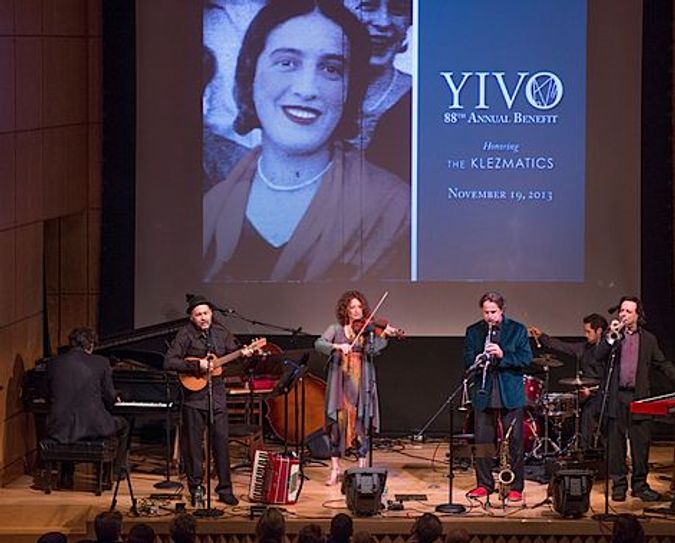 Shandler, a former YIVO staffer, told the crowd that the band “offers all of us a provocative model of how to respond to the destruction of Europe’s Yiddish culture during World War II, not to accept its devastation, not simply to preserve its fragments, but to respond to destruction with creativity. And to do so brazenly, smartly and playfully.”

Lorin Sklamberg, who has worked on and off at YIVO since 1987 as assistant to the assistant director, Yiddish typesetter, graphic designer and assistant director of KlezKamp, currently works there part-time as a sound archivist. Asked to comment on how klezmer music has evolved over the years, Sklamberg told The Arty Semite: “The music had been cut off for 20 years. People weren’t passing the music on in the United States past the late 1950s. So, to be able to take up that mantle was a challenge and our great joy.”

Drummer Dave Licht, who has divided his work life over the years as professional musician and house painter, actually painted gold leaf on the interiors of YIVO when it was housed in the old Vanderbilt mansion on Fifth Avenue. During his first week in New York in 1985 Licht met trumpeter Frank London. A few months later he joined the new band that was forming.

“I was lucky to be in the right place at the right time,” said Licht, who also drums with The Klez Dispensers in Princeton, Yale Strom’s Hot Pstromi and a Dave Tarras tribute band when he’s not painting and plastering.

London thanked YIVO from the stage. “So much of our work comes out of the YIVO archives,” he told the packed auditorium during YIVO’s 88th Annual Benefit. “Thank you for informing our work.”

After the band performed such favorites as “Ale Brider” and “Shnirele Perele” London said that about 10 years ago when he was working on an adaptation version of the I.L. Peretz play “A Night in the Old Marketplace” YIVO’s music archivist Chana Mlotek was reluctant to provide musical sources referenced in the play.

“Before she gave me the inside skinny, she wanted to make sure that [her son] Zalman wasn’t going to work on it and that I wasn’t stealing the opportunity to stage a version of this first,” London said. “I’ve always thought that we are blessed to be a link in the chain of Yiddish continuity and Yiddish culture and Yiddish history, things that have been going on for a thousand years. And as long as people keep on building the chain, it continues.”

The Klezmatics’ papers and concert posters have been donated to YIVO. London says the next big thing on the band’s horizon is a concert at Town Hall in New York that will explore the relationship between Jewish and Latin music. The band will be joined by the great Latin jazz man Arturo O’Farrell and Yerba Buena vocalist Xiomara Laugart.