A Christmas Song, Brought to You by an Israeli-Iranian Duo 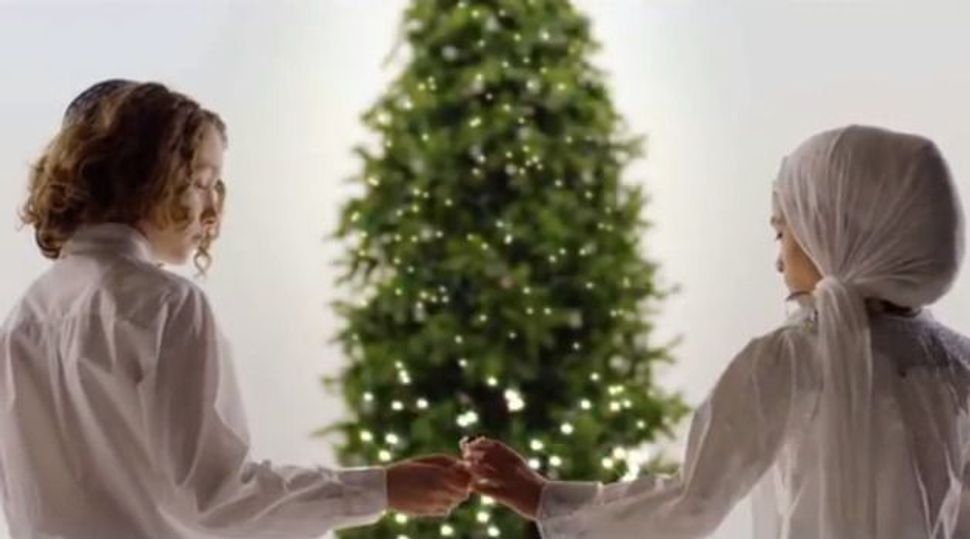 What’s the only thing that Israel and Iran can agree on?

Originally written by Yoav Ginai and Tomer Addadi for Israeli singer Boaz Sharabi, the song was released as “Chag Sameach Ahavat Chayai” (happy holiday, love of my life) about three years ago. Kolet got the idea of re-recording by Tomer Addadi, to be featured on her upcoming album.

What ensued is perhaps the most absurd Christmas video ever to hit the Internet, from the early shots of a yarmulke-clad boy bowing to a little girl in a hijab (and then them holding hands in front of the Christmas tree) to the black and white montage of the singers dramatically embracing world peace.

“The idea to record a song together was born in Berlin,” Kolet told Ynet. “It happened when I performed in a concert in solidarity with the Iranian people and met Ebi there. We both live in Los Angeles and we started talking. I thought that singing a duet with him would be the right thing to do. Irit, my manager, met with Ebi’s manager, and we decided to record a duet for Christmas with a message of peace, which would be sung by a Muslim man and Jewish woman, and it appears to have worked.”

“I think it’s very brave of [Ebi] because he has a lot to lose, both in cooperating with an Israeli and a song for Christmas, a holiday which is not very popular among Muslims,” Kolet added in the interview.

According to Ynet, the song will also be released in Spanish (what!) and has enjoyed some success in Iran.

Kolet’s album featuring the sure-to-be holiday hit will be released in February. The 24-year-old has signed with the Warner Music Group’s ADA company to produce another album, with an option for two more.

Check out the video below. You have been warned:

A Christmas Song, Brought to You by an Israeli-Iranian Duo