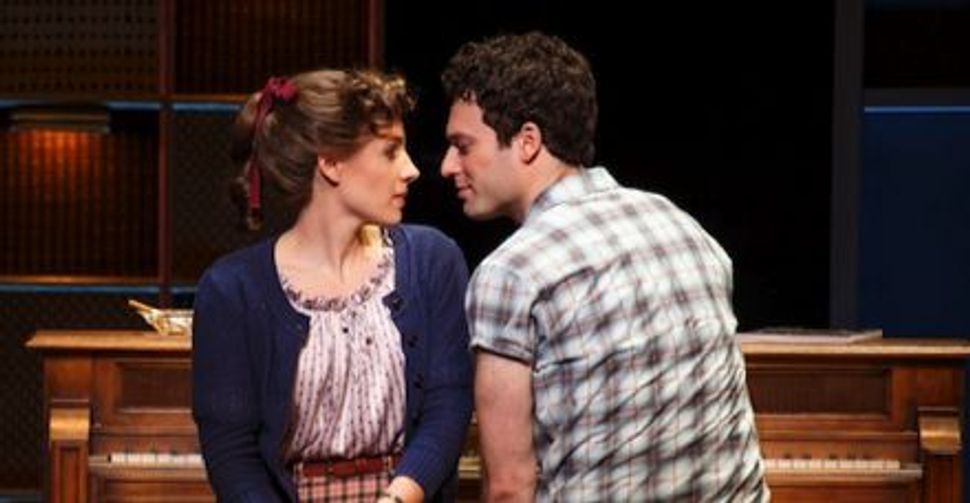 Somewhere in the universe of critics, a Broadway purist will dismiss “Beautiful: The Carole King Musical” as just another jukebox show. 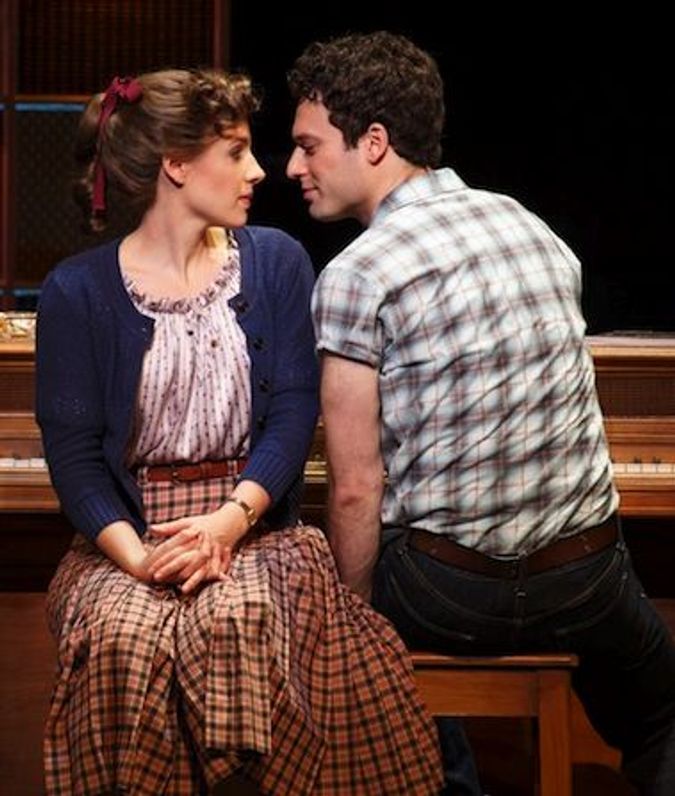 But don’t mention that to Jarrod Spector, 32, who portrays Barry Mann: “A jukebox musical is something like ‘Mamma Mia,’ where you take a bunch of songs and make up a story around them. ‘Beautiful’ is a bio-musical. Rather than a story out of context, you’re actually getting a look at the genesis of these songs. You’re getting a look at the music industry in the ‘60s, when a bunch of Jewish teenagers sat in little rooms and wrote songs for black singers and soul groups.”

Jake Epstein, 26, who plays Gerry Goffin, adds: “This is a show about how these songs came to be.”

The music of King and Goffin, her writing partner and former husband, and Barry Mann and his wife and writing partner Cynthia Weil, with songs such as “Take Good Care of my Baby,” “Up on the Roof,” “On Broadway” and “Will You Love Me Tomorrow,” among others, helped define the baby boomer generation.

Spector and Epstein spoke to the Forward about the music they listened to growing up, Jewish mothers, and playing drums in a Rage Against the Machine cover band.

Curt Schleier: Were you a fan of this music growing up?

Epstein: I grew up on this music, literally listening to [Carole King’s album] “Tapestry” when I was a kid. I didn’t know who Gerry Goffin was, but I knew his music.

Spector: I can’t claim that I knew the names Gerry Goffin and Barry Mann growing up. While my parents were Carole King fans, they weren’t diehard Carole King fans. They were more into Motown. I would have known the Drifters more than Carole. I loved “You’ve Lost That Loving Feeling.” I was a child of the ‘80s. I saw “Top Gun” a million times.

Epstein: Where did they sing that?

Spector: Goose and Maverick sing it at the bar.

But this was your parents’ music. What did you listen to?

Epstein: The funny thing is that this literally was my music. I was a weird kid. I love folk music. I listened to Dylan and Woody Guthrie and Simon and Garfunkel and Carole King until high school, when some of my friends started to make fun of me for not listening to contemporary music. I always felt I was born in the wrong generation. When I started playing in bands I was in a lot of alternative bands. I was a drummer in a Rage Against the Machine cover band.

Spector: I grew up listening to what my parents listed to, a lot of Motown, Barry Manilow, Frank Sinatra. There was a lot of Michael Jackson and Stevie Wonder. A lot of James Taylor growing up. Like Jake, when I got to high school I had to start listening to what was popular at the time. Other people exposed me to different music. My brother got me into the Grateful Dead and Hendrix. Finally, when I was a little more on my own, grunge. Dave Matthews was big. I love Billy Joel a lot because I play the piano. Billy Joel and Elton John.

Jarrod, you hold the record for playing Frankie Valli for over 1500 performances of “Jersey Boys.” Was that hard?

Spector: It was really difficult. Part of the reason I stayed in it as long as I did was that the recession hit Broadway. How could I have left when everything else was closing and I was safely entrenched in this juggernaut hit? Another impetus was the audience. I know that they paid a lot of money, that it was someone’s birthday, someone’s anniversary, someone’s first Broadway show.

Will you stay with “Beautiful” for 1500 performances?

Spector: No, definitely not. I wish this show to run forever, but I will not be here.

Epstein: It was my Broadway debut, my first job in New York. I came in about a year and a half into the show. Everything in the press was about people getting injured. I didn’t care. I was so grateful to get a job. It was a dream job for me, and no one was injured when I was there. I felt completely safe and completely comfortable. I think my mother was very happy when I got out of that show. She was freaked out that something was going to happen to me.

Both of you guys play real people. Is that easier or harder than playing fictional characters?

Spector: It’s always a trick to play someone who is real. Frankie Valli was a public figure. Gerry, Barry and Cynthia are well known, but people don’t know what they look like. While we have to honor the people, the primary focus for me was to service what was on the page and trust that the writer did his homework and portrayed the people accurately. It helped that Barry and Cynthia came and were extremely supportive of the performance. Anika [Larsen, who plays Cynthia] and I went out to dinner with them and heard some of their stories. Some of what they told us made it into the show. These anecdotes helped make each song more than just a concert piece.

Epstein: I’m in the same boat as Jarrod. I spoke to the writer and director about not replicating Gerry. It’s about finding the truth of who this guy is and telling it in the context of a musical theater piece. He had a lot of troubles in his life during this period and I wanted to portray that in an honest way, but also to keep them likable so people still care about the love story. Because at the end of the day, that’s what this really is: a complicated love story. We very briefly got to meet Carole King. When she heard I was playing Gerry, she told me, you’ve got to make him likable. I totally understand what she was trying to say. Despite the choices he made at that time of his life, he has to come from a very human place.

Can you talk a little about you Jewish backgrounds?

Spector: I grew up in a very Reform household. I was bar mitzvahed. But to be honest I relate more to Jewish culture and traditionalism. I am not particularly devout or regularly attend synagogue.

Epstein: I grew up in Toronto and both sides of my family were quite religious. I was raised Conservative. For me being Jewish is all about family. Growing up, we lived near a lot of aunts and uncles and cousins. Every Friday night, we would go to a different aunt’s house for a Shabbos meal where we would all get together. That tradition continues, and moving away from home and not seeing my family feels a little like losing that little part of Judaism in me.

Do you bring any of that background to your work?

Epstein: Of course you bring who you are with you. I bring my weird uncle’s sense of humor. Playing Peter Parker, I used to imagine him as this totally neurotic Jewish kid bit by a spider.

Spector: Both Jake and I are playing Jewish musicians, so it’s hard not to bring that with us.