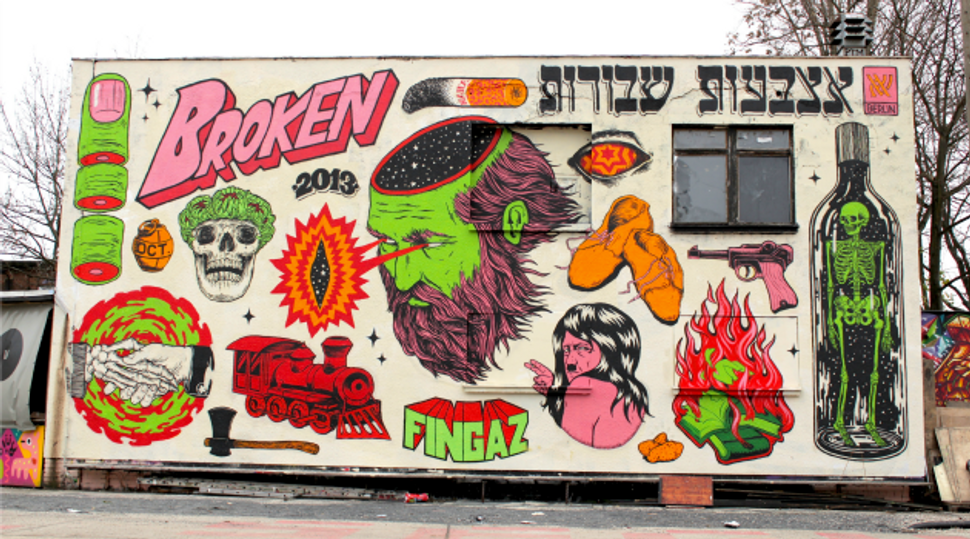 Remember New York in the 80’s? Than you can imagine what certain parts of Berlin look like today. Here you can still see entire neighborhoods serving as battlegrounds for graffiti writers and street artists.

The graffiti scene always had a strong force in this city. The Berlin Wall was a prominent surface for protest slogans and nowadays the German capital seems to be too broke to challenge the autonomous art front.

While I was walking through Berlin, I spotted a line of Hebrew text on a big psychedelic mural. It took me several seconds to realize that I had just bumped into an artwork about the Holocaust consisting of carefully designed colorful vignettes. Most of the references seemed easy to decode: A pile of burning books, a train, a skeleton, a soup.

Others were slightly more ambiguous: Why was Hitler wearing a wig? Why was the skull decorated with vegetable-like flowers? And who was the figure in the center: A green-skinned man with a pink beard emanating hot radiations in vagina-like shapes? Was he a science-fiction rabbi? A potent God who had emerged of a teenage boy-phantasy? And more importantly, who in Germany would create such an insane Holocaust mural right next to the train station?

Don’t get me wrong. I wasn’t shocked to see a provocative approach to depicting the most traumatic chapter of Jewish history. I had read ‘Maus I and II’ by Art Spiegelman, I had watched ‘Inglorious Bastards’ by Quentin Tarantino, I was familiar with the Lego concentration camp by Zbigniew Libera, which was exhibited in art shows all over the world.

But in this case I was confused about the lack of explanation. There was no sign informing about the authors. In a place like Germany I would at least expect some sort of trigger warning. I realized soon that the mural was part of the Urban Spree Gallery, which specializes in street art. I spoke to the curator, Pascal Feucher, who told me about the Israeli artist collective Broken Fingaz: Four guys from Haifa in their twenties. They had the guts to create a mural called ‘Shoa Acid’ in the capital of Germany. And after this coup they simply hit the road to their next artist residency in Mexico.