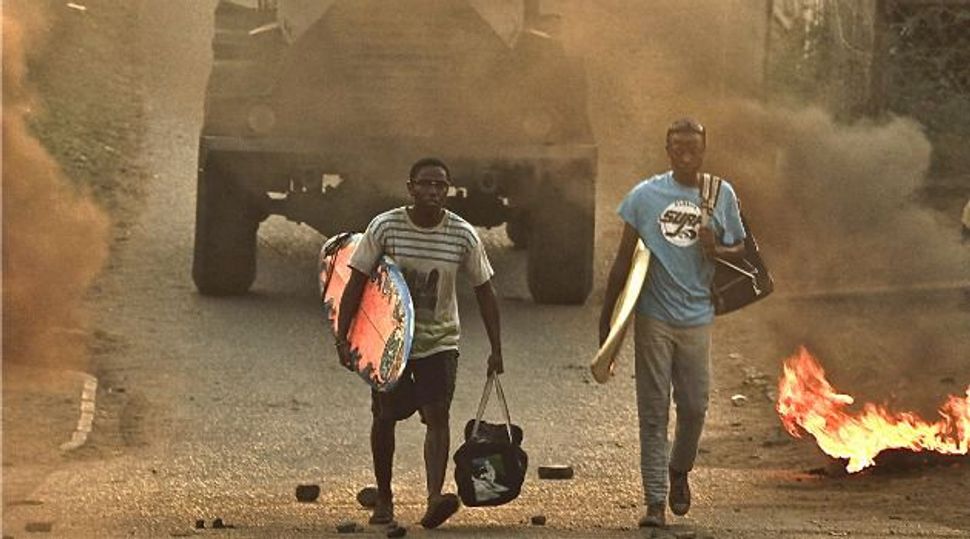 In the late 1980s, South Africa experienced a period of violence leading up to Nelson Mandela’s release from prison and to the abolishment of the apartheid government.

Sara Blecher, granddaughter of Lithuanian Jewish immigrants, was in the midst of it, working as a journalist. She later realized that the complex intra-black conflicts, which the white government fomented, were still often neglected in the country’s narrative of its history. This inspired her to direct and produce her first feature film, “Otelo Burning,” which had its digital release January 14. The script is based on an amalgamation of true stories about this time, recorded during workshops with inhabitants of the township Lamontville near Durban, where the story is set.

It starts off like a feel-good coming-of-age story set against the startling beauty of the South African coast: Otelo and New Year are two teenagers growing up in the township in the late 1980s. When they meet Mandla, who is an experienced bodysurfer, they are introduced to this new sport, an activity practiced predominantly by white people.

The boys escape from the erupting violence between the two rivaling black parties in the township, the ANC and Inkatha, by going to the beach and improving on their surfing — until events take a tragic turn.

Blecher, 46, grew up in Johannesburg. She attended high school and college in New York City and returned to her home country afterward. In March she will start shooting her second feature, “Andani and the Mechanic,” the story of a young female entrepreneur dealing with the death of her father and with unspoken love.

Blecher spoke to the Forward’s Anna Goldenberg about what stories dealing with the Holocaust have in common with those about apartheid.

Anna Goldenberg: How was your film received in South Africa?

Sara Blecher: I think white audiences in South Africa, and maybe also some black audiences, don’t like to watch stuff about apartheid. People who pay for movies don’t want to be reminded of that stuff. But I think young people who don’t know those stories do want to hear [them]. Like, during the Holocaust, they say that those people who suffered the Holocaust, if you talk to their children, their children very rarely know the stories of what happened…. The thing that young people always say to me when they watch the movie is: ”It’s so nice to see what life was like for ordinary people. If I had lived under apartheid, I wouldn’t have been Mandela or one of the leaders. I would have just been an ordinary person.”

Have you had personal experiences with talking about the Holocaust and apartheid?

My grandfather managed to leave Lithuania just before the Holocaust. He came to South Africa, and the plan was for him to come here and make enough money to bring the whole family out. Unfortunately he wasn’t able to do this, and all his family, except for one brother, were killed. My grandfather spent the rest of his life living with the guilt of having survived. As a result, he never talked about what happened. It’s strange, because I only recently learned that his family had been killed by Lithuanians — their neighbors, who took them out to a forest and, after making them all dig their own graves, shot them. All my life I’d lived with the belief that my family had been killed by the Nazis. That was the story my parents believed. My grandfather never told them the truth, so they had a very simplistic and distorted understanding of the war and what had happened. The story of South Africa’s transition to Democracy has likewise been simplified to a tale of white oppressors versus black freedom fighters. But in fact the reality of that history is far more layered and nuanced. Sometimes the reasons for such gross simplifications are merely because the complexity of the situation is cumbersome and difficult to [determine]. But sometimes it’s because the complex psychology of survivors makes them reticent to tell their stories, and so they never become a part of the fabric that is history.

As a journalist, you covered the same period of violence and transition in which the movie “Otelo Burning” is set. How do you think it inspired you to make this movie?

The most horrific thing I saw during my time covering this violence was a dog walking through the streets of one of the townships, carrying a human bone in his mouth. This image has stayed with me ever since. This, and the image of a hundred dead hacked bodies lying unclaimed outside a morgue. In many ways, making ”Otelo Burning” was my attempt to exorcise these images, to make them go away. There is an image in the film of a dead body lying in the street after one of the Inkatha attacks. Skhumbuzo, the lifeguard, sits and watches over this body. This same image is shown from three different angles in succession. To me this was an attempt to re-create the image that recurs in my nightmares. The image was so significant to me, because I wanted to make an audience realize how deeply these killings affect those left behind.

Where do you see the differences between New Yorker/American and South African Jewish life?

I do feel like Jews in America have an easier time taking up the cause of Israel than progressive South African Jews. The similarities between the struggle against apartheid and the Palestinian struggle blur a lot of lines and complicate many of the issues for those Jews who fought against apartheid. This is further complicated by the fact that many of us are also descendant of Holocaust survivors, and so we deeply understand the need for the existence of the State of Israel. But here I really am only talking about a very thin slice of both Jewish populations. I also think Jewish history makes it easier for one to identify with an oppressed people. Or let me, rather, talk very specifically: My Jewish identity helps me identify with oppressed people — all over the world.