JDaters, Are You Ready to ‘Get Chosen’? 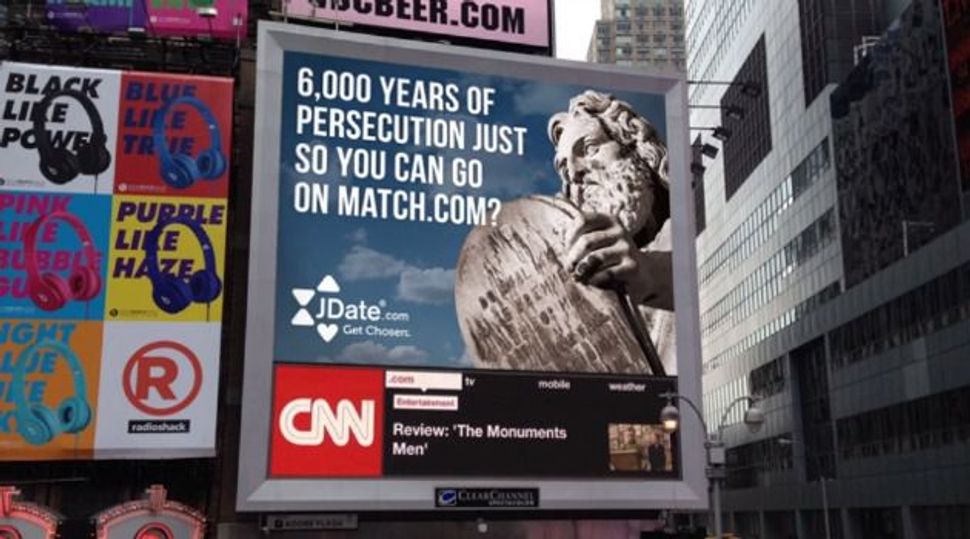 Are you ready to “Get Chosen?”

That’s what JDate is asking in its new ad campaign, which made its grand debut in New York City’s Times Square on Thursday.

The ads come to you courtesy of Terri & Sandy Solution, a New York-based advertising firm, who created the campaign based on Jewish humor and culture. As Sandy Greenberg, one of the firm’s co-founders, told the New York Times: “We don’t care if non-Jews don’t get this work.”

The campaign reportedly cost between $2 and $3 million dollars, according to the Times. The Pew Research Center’s 2013 survey on American Jews showed that the intermarriage rate among non-Orthodox Jews who had wed since 2000, was 71%. Among Jews of no-religion, who identify culturally as Jewish but are not religious, that number rose to 78%.

Some of the taglines include: “Find someone who shares your love of gefilte fish;” More Jews than a Chinese restaurant on Christmas;” “Meet someone who wasn’t on your Birthright trip;” and our personal favorite (not), “6,000 years of persecution just so you can go on Match.com?” (see above.)

JDaters, Are You Ready to ‘Get Chosen’?