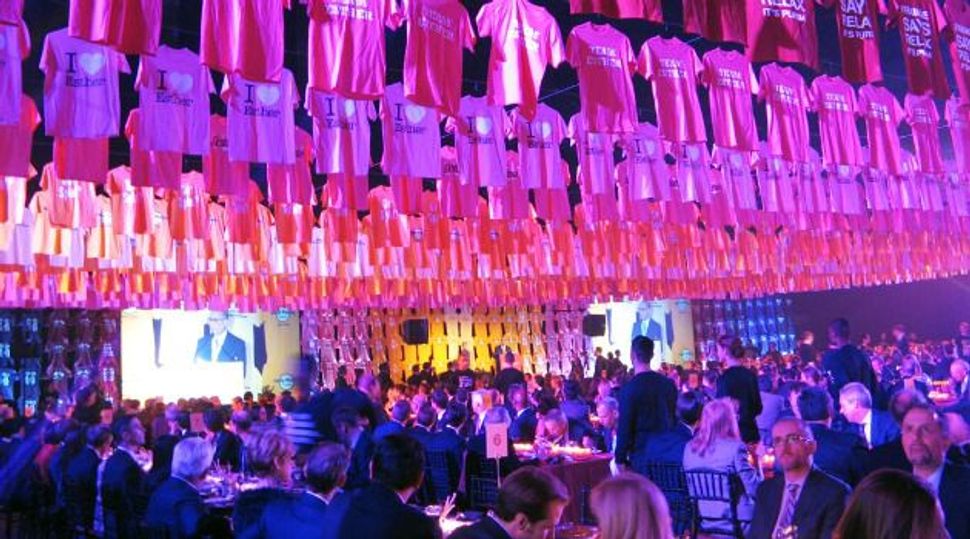 “It’s hard to imagine that we sold out The Armory!” beamed Claudia Gould Director of the Jewish Museum at its February 26 Purim Ball which raised a record $2.5 million.

More than 1,000 festive donors dined on a fabulous meal beneath a ceiling installation of 3,000 T-shirts with such imprints as: “I Love Esther” and “Got Spiel?”

Honoree Anshu Jain, co-chief executive officer of Deutsche Bank, was introduced by BlackRock, Inc. president Robert Kapito, who said, “Queen Esther was a Jewish queen over what was part of modern day India… and Ahasuerus reigned from Hodu to Kush which is the Biblical word for India.” Jain affirmed his familiarity with the Jewish community noting that Indian tradition also hones to “twin views of praise and guilt.”

Purimspieler Jessica Williams, a correspondent on Comedy Central’s “The Daily Show with John Stewart,” greeted the guests with: “Hey everybody! Hope you are ready for this, ‘cause it’s about to go down tonight…. There’ll be a lot of Twitter and Facebook and Instagram…. To all the older people — good luck!”

Delivered in Rap and Twitterese, Ahasuerus is King Aha-Tsurus, “the biggest rapper in the U.S., whose crew is De Persian Statesmen who won a lot of Grammys and hangs out with Warren Buffet. King lives with wife “Vashti Knowles” aka “Queen V [Beyonce], so popular she sang at President Obama’s” Inauguration. Theirs is a “life of fame, glamour and of course — anti-Semitism…. Aha-Tsurus has a beef with a Jewish gang, The Jew Tang Clan — a gang not to be messed with… It was rumored that the Jew Tang Clan killed [two major rappers] so he vowed to make the Jew Tang Clan his sworn enemies…. Aha-Tsurus was famous for anti-Semitic lyrics like, ‘What you not a fan, got murdered like the Jew Tang Clan…homey lookin’ real skittish, whatsa matter with you at least you don’t speak Yiddish.”

According to Williams’ hip-hop spiel “Aha-Tsurus held a party with a lot of twerking strippers — ‘who don’t count as humans’— and tweets Vashti to get her “booty butt’” over to his 50-50 Club. No! He divorces her. The king needs a new “Boo” and orders his crew “’Go find me the flyest girl but she can’t be Jewish or from the Jew Tang Clan.” Mordechai, aka Mordy, appears as rapper and a former Jew Tang Clan alum. As for his adoptee Esther, Williams informs: “She has the advantage of being racially androgynous, not unlike [Grammy–winning] Bruno Mars.”

King falls for yoga-loving Esther. Another rapper — Haman West — a member of the Persian Statesmen and “a lot like Kanye West, hates and attacks Mordy. Esther “comes out of the Jewish closet” to save Mordy, the members of the Jew Tang Clan and herself. Haman gets exiled to his wife’s Kardashian-like reality show. King is no longer anti-Semitic, makes amends “with the Jew Tang Clan and others like “Jew Live Crew” and “The Old Money Boys.”

Williams concluded: “Esther is totally bummed she could not make it [here tonight] and ”she tweeted me to tell you that tonight celebrate goofy Jewish Halloween in her honor.”

Then came the after party and every guest left with a fun white T-shirt with the imprint “Body by Hamentaschen.”