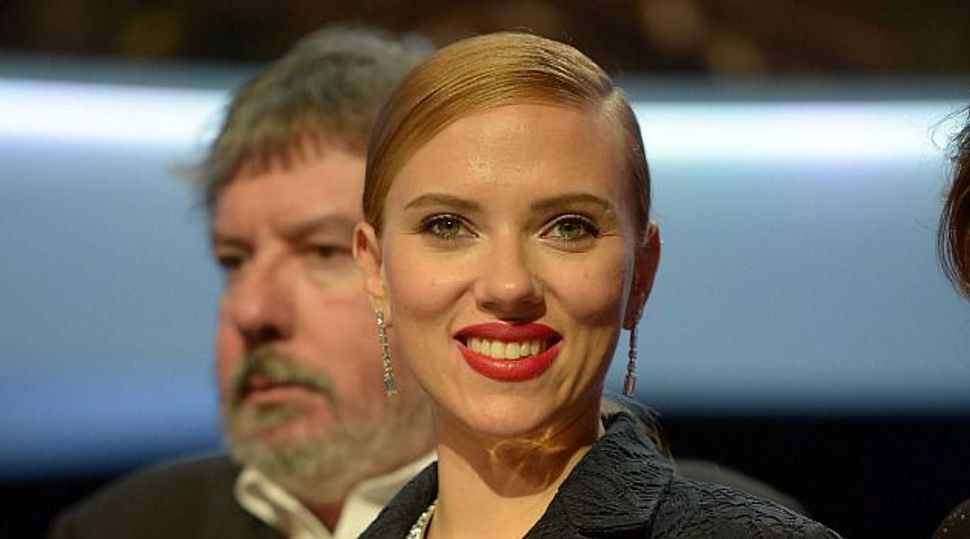 She kept appearing at the conference though, after a fashion.

Her image — 10 times over — was flashed during a demonstration of the ElMindA, a hairnet-like device that scans a brain’s electronic activity. The company’s managing director, Ronen Gadot, tested the device on Winton Stewart, a linebacker at Alabama State University who is also AIPAC’s deputy director of campus outreach. (Football players are especially susceptible to concussions, which the device could help diagnose more accurately).

The idea was that the device, by tracking how one’s brain registers an image, could then track one when it appeared in quick succession among other images. It is a more accurate measure, Gadot contended, than subjective memories. In other words, while one may remember detecting Johansson’s face five or six times, the device would be able to more accurately register exactly how many times your brain made the right call.

Stewart said he remembered eight out of the 10 viewings, and Gadot said the device recorded that many.

At the conference closing, Prime Minister Benjamin Netanyahu brought Johansson up again, although perhaps in a weirder way. He applauded her role in the SodaStream matter, when she rejected calls for her to boycott the product.

But then he likened her to … a plantation owner? His second paragraph alludes, after all, to Scarlett O’Hara the Southern belle of “Gone with the Wind.”

Everyone should know what the letters B-D-S really stand for: bigotry, dishonesty and shame. And those who — those who oppose BDS, like Scarlett Johansson, they should be applauded.

Scarlett, I have one thing to say to you: Frankly, my dear, I DO give a damn. And I know all of you give a damn, as do decent people everywhere who reject hypocrisy and lies and cherish integrity and truth.