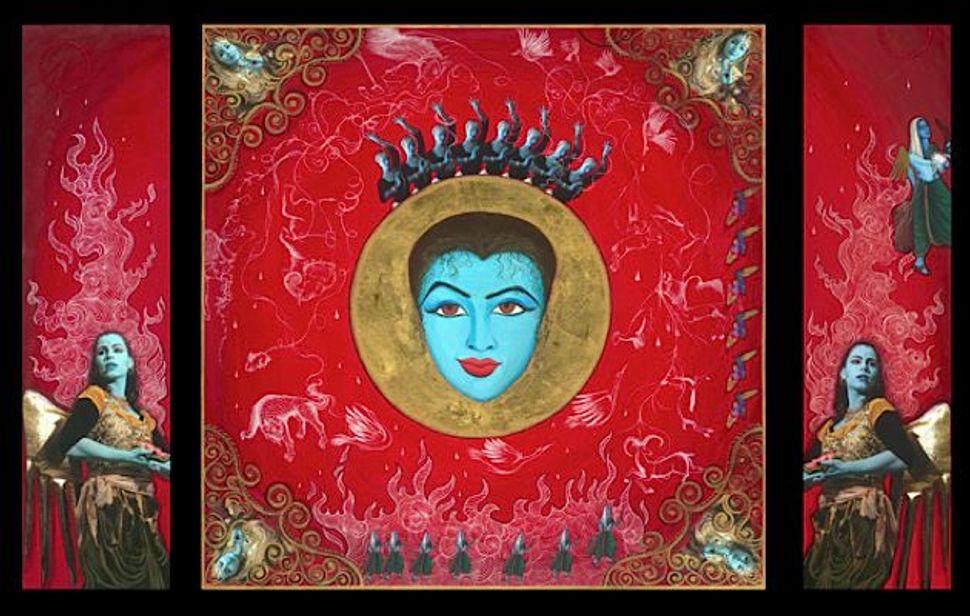 Last month, while researching an article for The Forward about Indian Jewish cuisine, I spent the afternoon in Montclair, New Jersey with Siona Benjamin. A home cook who grew up in Mumbai’s Jewish community, Benjamin demonstrated how to prepare a traditional Shabbat coconut curry and a sweet rice and coconut dish called malida that Indian Jews make in honor of the Prophet Elijah. But, as often happens when I cook in other people’s kitchens, I learned about much more than food.

Benjamin’s home is filled with art — specifically her own technicolor paintings and multimedia pieces, which weave together Jewish and Indian images. A classically trained artist (she has two MFAs in painting and theater set design), who is inspired by “traditional styles of painting, like Indian/Persian miniatures, Byzantine icons, and Jewish and Christian illuminated manuscripts,” her work has been exhibited across the United States, Europe and Asia.

In 2011, Benjamin traveled to India on a Fulbright scholarship to interview, photograph, and document the lives of more than 70 of Mumbai’s remaining 5,000 Jews. Back at home, she transformed these stories into a stunning collection of oversized photo collage paintings called “FACES: Weaving Indian Jewish Narratives.”

In addition to being visually striking, Benjamin’s paintings tell the story of today’s Indian Jews — from General Jack Jacob, a prominent army hero who was instrumental in forming the country of Bangladesh, to a singer named Diana Elijah who writes her own Indian Jewish Marathi music, the synagogue lamp lighters of Mumbai, and a beautiful, henna-covered Jewish bride named Karen Simon.

My favorite image features Hannah Emanuel Samuel, a local cook whom Benjamin followed around for several days while she prepared food for parties and Jewish ceremonies. “She literally stuffed me with food,” Benjamin said. In order to weave food directly into the painting, Benjamin mixed ground turmeric — a spice commonly found in Indian cooking — with red and yellow paints to deepen their hue and bring a touch of scent to the piece.

Below, learn more about Benjamin’s life and work as an artist. And if you live in or are visiting New York this spring, check out “FACES: Weaving Indian Jewish Narratives,” which will be on view at the Flomenhaft Gallery until April 26.