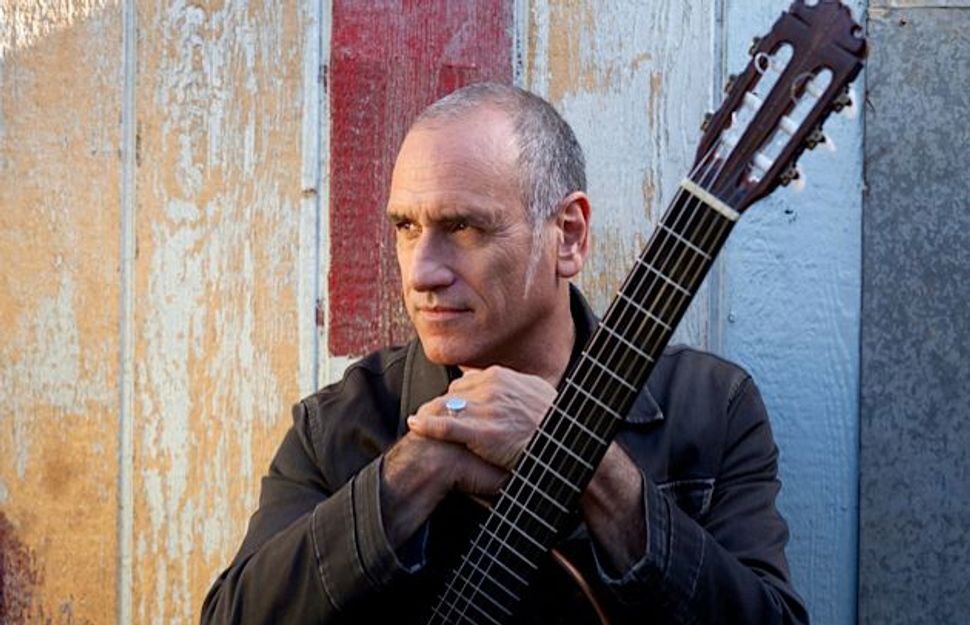 He is also among the nation’s most recognized peace advocates, a fact that fueled his most recent activities — an album, “East Jerusalem/West Jerusalem” (S-Curve Records), and an accompanying documentary of the same name.

The film recently aired at the Other Israel Film Festival in New York, and at the ABC Foundation Conference in Miami. It is essentially a making-of-the-album film, but also focuses on Broza’s efforts to use music to bridge the gap between Israelis and Arabs.

The concept was simple. Broza rented time at the Sabreen studio in East Jerusalem, a center of the Palestinian music scene. He gave himself eight days and eight nights to record 13 tracks heavy on a peace motif. On each he is complemented by a number of Israeli and Palestinian musicians and singers, including Mira Awad. To add a bit of American flavor he brought in Steve Greenberg and Steve Earle to produce.

This is not Broza’s first effort to use music to breach political and physical walls. He has toured the Middle East with Arab musicians and his hit song, Yihye Tov, is an anthem of the Israeli peace movement.

On the question of nature vs. nurture, Broza’s politics have been formed by both. His maternal grandfather, Wellesley Aron, was a co-founder of Neve Shalom, the Israeli-Arab peace settlement, as well as the Habonim Youth Movement.

“No question,” Broza told the Forward, about being influenced by granddad. “From the age of 16 he took me by the hand.”

But his attitude was also affected by military service in the first Lebanon War. “It had a major impact,” he says. He was called up as an entertainer and performed about 300 shows, many close to the front.

“I saw things my eyes and soul were not trained to digest. This was intense. There was destruction everywhere. It was apocalyptic,” he said.

But that was over three decades ago. Around the time of this interview, innocent Israelis were being run down by hit-and-run drivers and stabbed as they stood on the street. Does he still believe peace is possible?

“Of course peace is possible,” he insists. “There are two sides to the coin. Let’s agree that the two sides are not very open to each other. I don’t deal with the politics. I would rather recondition people through songs and imagination and building bridges and some kind of communication channel that would establish a trusting environment.”

“Look how long it took the Irish to put down their guns. Are we expecting this to be an easy process? People like myself and a few others who are with me, we don’t give up.”

Earle is one of them. The two met through Towns Van Zandt, the late blues/folk singer. Earle wrote and originally recorded “Jerusalem,” a much-covered cry for peace that is on Broza’s album as well.

Broza asked Earle to produce, though he didn’t believe that he would. “I know he’s an activist for peace, but I was almost 100% certain he was a BDS supporter. But he’s not. As an artist he’s as completely opposed to BDS as I am. He jumped on the process.”

Like Broza, Earle believes that peace is possible. As he says in the documentary: “I’m a recovering heroine addict and I can’t believe in anything like a lost cause because I was believed to be one by everyone including myself.”

(In one of the film’s lighter moments, he describes the problems he had making the trip to Israel, because of one of the instruments he brought with him. “Don’t call it a bouzouki,” he learned. “Call it a mandolin.”)

Earle supervised the recordings, which also featured the Jerusalem Youth Choir, a mixed Arab-Israeli chorus. Broza feels young people are the key to peace and during the course of filming visited the Shuafat refugee camp, where he worked with children.

It is a practice he continued after the cameras were off — or at least until Operation Protective Edge put everyone on edge.

“I haven’t been able to get near the neighborhood. Since the war I haven’t been able to maintain regular contact. One thing I’ve learned in the Middle East is to slow down and take your time. Whether it takes months or I don’t know how long, the visits will resume. You hope everyone is okay and you don’t turn your back on anyone.”

“I can understand where someone’s gone through a terrible situation can become disillusioned, But [peace] is not hopeless. People walking out of Dachau were hopeful.”

David Broza will be at the Jewish Community Center in New Orleans on December 14 and at the 92nd Street Y in New York on December 24.