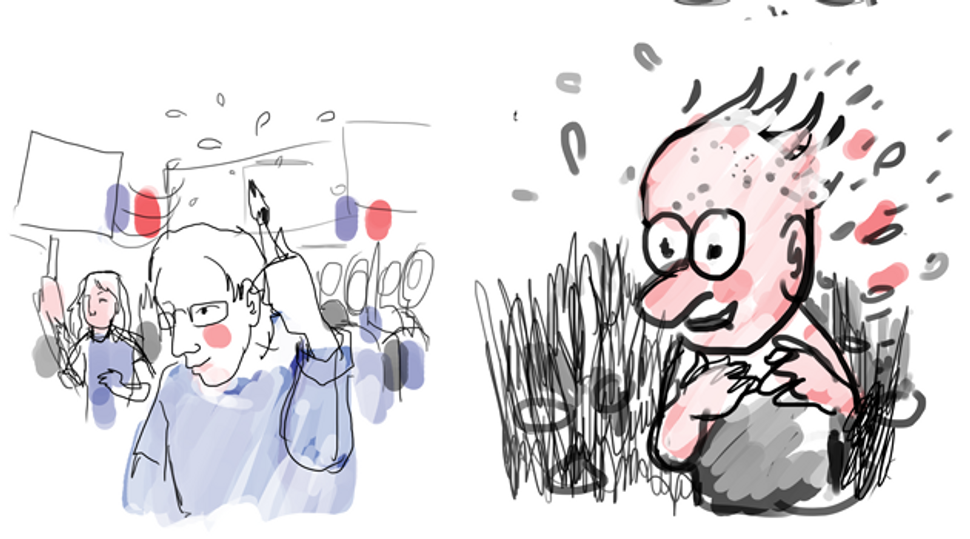 As a cartoonist, I’ve often been scared to breach political topics in an overt way. My fear centers on the reactions I might get from family and friends, or from internet trolls — but never on any concern for my life. That reality has now changed.

Can’t sleep tonight, thoughts with my French cartooning colleagues, their families and loved ones #CharlieHebdo pic.twitter.com/LqIMRCHPgK

This is a heart-wrenching week for the cartooning community. Two masked gunmen stormed the offices of Charlie Hebdo, killing 12 people, four of which were cartoonists: Stéphane “Charb” Charbonnier (47), the editor in chief, Jean “Cabu” Cabut, Georges Wolinksi (80) and Verlhac “Tignous” Bernard (58).

I’ve often looked up to cartoonists like those staffing Charlie Hebdo: it takes some real chutzpah and strength of character to make fun of the most charged and sensitive topics out there. Yet they do it with ease, regularity and ferocity. Nothing was sacred for the satirical publication: It made fun of French politicians, Jews, Christians, Buddhists, Muslims — oh, and Israel, too. Nothing was off-limits and the cartoons were often offensive and sometimes crass and arguably racist.

But the cartooning community is reeling from the repercussions. Charlie Hebdo was a satirical publication, not just a cartooning magazine. And yet the reason it got attention was because of its strong images, a lot of which were drawn by its editor in chief Charb (Stephane Charbonnier). Charb had been getting death threats for years and the publication was previously bombed in 2011. Charb’s latest cartoon, seen below, said: Caption: Still no terror attacks in France Character: “Wait! We have until the end of January to present our wishes!”

Political cartoons and satire were always at the forefront of freedom of speech. Images are more easily consumed and quicker to cause an uproar — just as they did in the 2007 Jyllands-Posten Mohammed cartoons controversy.

Hundreds have been marching across France in solidarity, especially in Paris and in the French town of [Angouleme], the cartooning capital of the world and home to arguably the biggest and most important international comics convention FIBD – Festivale Internationale de la Bande Desinee, which is set to take place at the end of this month. Many of us in NYC will join the rally in Union Square tonight in support of Charlie Hebdo

It should be mentioned that Charb did not believe that the terrorists threatening his life were in any way representing Islam. After the attacks on Charlie Hebdo’s offices in 2011, he said those who carried it out were “stupid people who don’t know what Islam is.” The great cartoonist Scott McCloud tweeted the following in response to the attacks:

Worst of all will be watching people answer religious fanaticism with racism. They’re both symptoms of the same disease of the mind…

So what does it mean for cartoonists and our freedom of speech? Should we censor ourselves out of fear for retaliation? The bottom line for many in the French and international cartooning community is that we need to stay close and unified and honor the deaths of our four fallen fellow artists. We need to be even fiercer with our truths, because now people have died trying to protect it. FIBD’s website issued a statement, ending with the following:

“Because this is our vocation, thanks to the writers of comics that have shown us the way, we will continue to think, with them and by ourselves. To doubt everything before reacting, so that we always strive to react in the right way. And with one certainty: drawings are eternal and, in our hearts, the disappeared artists of Charlie Hebdo will always be the same.”

Photo: The Pen is mightier than the Kalashnikov. #CharlieHebdo http://t.co/ghJBfUzal1