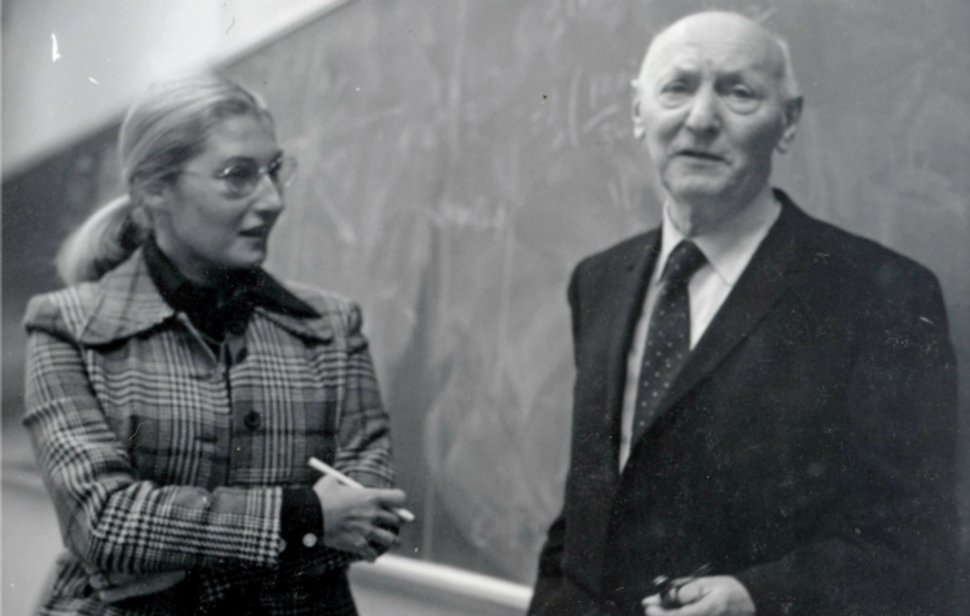 After a screening of “The Muses of Isaac Bashevis Singer,” I replied to a chutzpedik questioner: “Isaac never hit on me!” A frequent visitor in the 1930s to my parents’ Leszno 6 one-room home in Warsaw when I was toddler, I reconnected with him in New York in the 1960s when he and my father were both Forverts contributors.

In 1973, when the Jewish studies Department of Queens College offered “The Novels of I .B. Singer With The Author Present,” I was in that SRO classroom. We read a novel a week. In an attempt to impress Singer, students parsed his characters through Freudian/Jungian filters. Sitting in a chair, facing the awe struck class, Singer shrugged: “I create a karakter un der karakter does vat der karakter vants.” Apropos his heroes’ romantic appetites and roamings, he said: “A man can have as many liaisons [and illegitimate] children as he wants–but not so a woman!”

After his Nobel Prize for Literature brouhaha in 1978, I told his wife Alma — who spoke no Yiddish who with Singer had been dinner guests at our home–that she, too, deserved a moment in the spotlight. Isaac was out when we schmoozed at their 86th Street apartment where her daughter Inga, from her first marriage, served me babka.

“How do you feel about all the women who come onto him?” I ventured. “Thank God, now it’s mostly platonic,” she replied. The conversation covered stories that would have been grist for a Yiddish“Page 6.” Alma spoke of her supporting Singer after she left her first husband and two children for the skinny poor Yiddish writer. “Does he take your advice?” I asked. “And how!” “Do you act as his buffer?” Alma sighed: “He does not let me through, but I feel he absolutely overdoes it with interviews.”

What about critique of his work? She dismissed Cynthia Ozick’s “Commentary” piece “Envy in America” as being “tongue-in-cheek,” then declared: “What used to hurt me most was the New York Times when they reviewed his early books like “The Slave.” A man we met who professed great friendship knifed him in the back and gave it a terrible review. So many years of hard work went into it.”

Alma, who did the heavy lifting nitty gritty behind the-scenes-work told me: “I always write some of the letters for Isaac. I am in charge of our financial affairs. So you cannot say that I am altogether in the background.”

Because there was so much intimate detail, I sent Alma a transcript of the interview, in case she said something that would embarrass her. Then came the phone call. “Mashe! Do iz Isaak. Dos is nit an interview. Dos iz gossip! “ I told him it was “from Alma’s lips.” He replied: “You should have talked to her about literature!” I replied, “Isaac, to you I talk about literature, to Alma I talk about you!” He sent back the transcript with 2/3rd blue-penciled. The final piece that ran in the Forward was sweet and innocuous. Concurrently the Yiddish Forverts was serializing Singer’s memoirs about his somewhat graphic romantic exploits he had as a young man.

In one of her last letters from Florida in 1990 Alma wrote “Isaac has loss of memory and cannot work or walk anymore. Despite a touch of Parkinson’s he is quite physically well and often gives brilliant answers. It varies.”

Sitting next to Alma at Singer’s July 29, 1991 funeral in New York, we were both outraged that nary a word of Yiddish was spoken. And, lamented Alma, “Why couldn’t “Barbra Streisand — whom he made famous with “Yentl” — be here?”