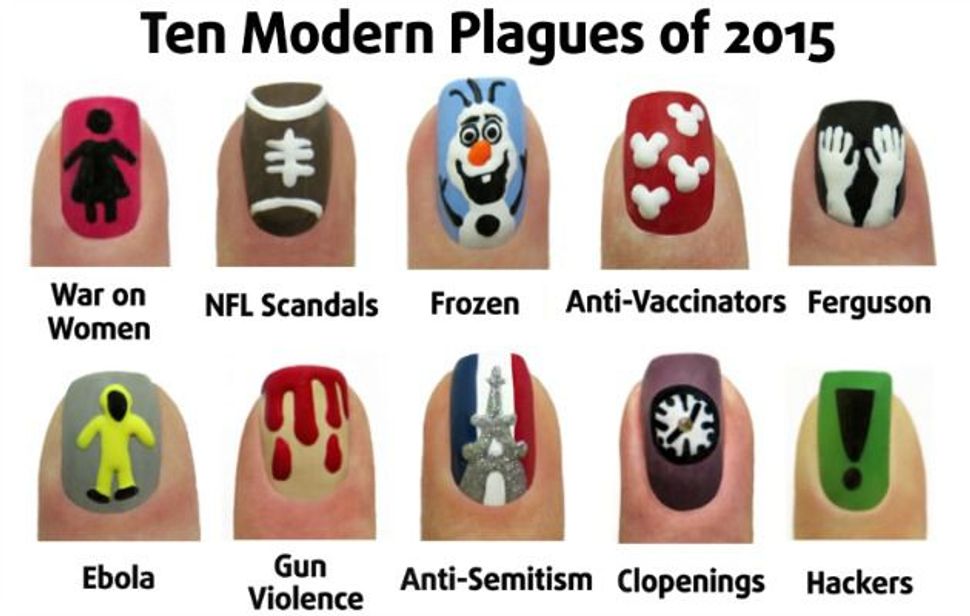 Wondering how to address that whole Passover nail situation? Midrash Manicures has a new interpretation of the ten plagues that will make any fashionista happy — and spark meaningful Seder conversation.

Rabbi Yael Buechler’s modern ten plagues include everything from Ebola to NFL scandals, to the war on women. And the parents among you may be happy to see that “Frozen”s Olaf is duly represented.

“[I’m] always looking for new and meaningful ways to help people engage with the Haggadah,” Buechler wrote in an email. “How can we in modern times connect with the concept of the ten plagues that afflicted the Egyptians? What plagues are we experiencing in modern society? From the lighthearted plague of Frozen paraphernalia, to the serious and deadly plagues of Ebola and gun violence, [I] want to expand the conversation at Seders worldwide.”

Buechler has also created a handy dandy PDF document that you can print out and share at your Seder table (and nail salon).

Below are questions that Buechler suggests as starting points for a constructive holiday table discussion. Add the required four cups of wine to the mix and you’ve got the perfect recipe for that annual Passover family blowout.

“There’s a fierce battle between politicians over a woman’s right to choose. Where do you stand on this issue?”

“Ray Rice initially received a two-game suspension for domestic violence. What do you think of the NFL’s response to this scandal?”

“This top-grossing animated film continues to plague our sound waves, lunch boxes, and Purim costumes. Which song is most stuck in your head?”

“The recent measles outbreak at Disneyland has been linked to low vaccination rates. What’s your take on the anti-vaccination movement?”

“This “hands up don’t shoot” symbol represents the protests that began in Ferguson, Missouri, as a result of tensions between law enforcement and the Black community. How do you think this gap can be bridged?”

“Outbreaks of this deadly disease have been rampant in West Africa. What is our responsibility to support the development of treatments?”

“Gun violence continues to plague this country. How can we ask our lawmakers to step up?”

“Anti-Semitism is on the rise in Europe and our hearts are with the families of the victims of the Paris Kosher market attack. How can we show support to the Jewish community abroad?”

“Franchises have been in the news for giving inflexible hours to employees, often requiring employees to have “clopenings” where they both close a store late at night and open it first thing in the morning. Do you think employees should have more of a voice in their schedules? Why or why not?”

“Many major retailers have had their security systems hacked and our credit card information has been stolen. What steps should be taken to protect our personal data?”

What would make your list of modern plagues? Let us know in the comments.