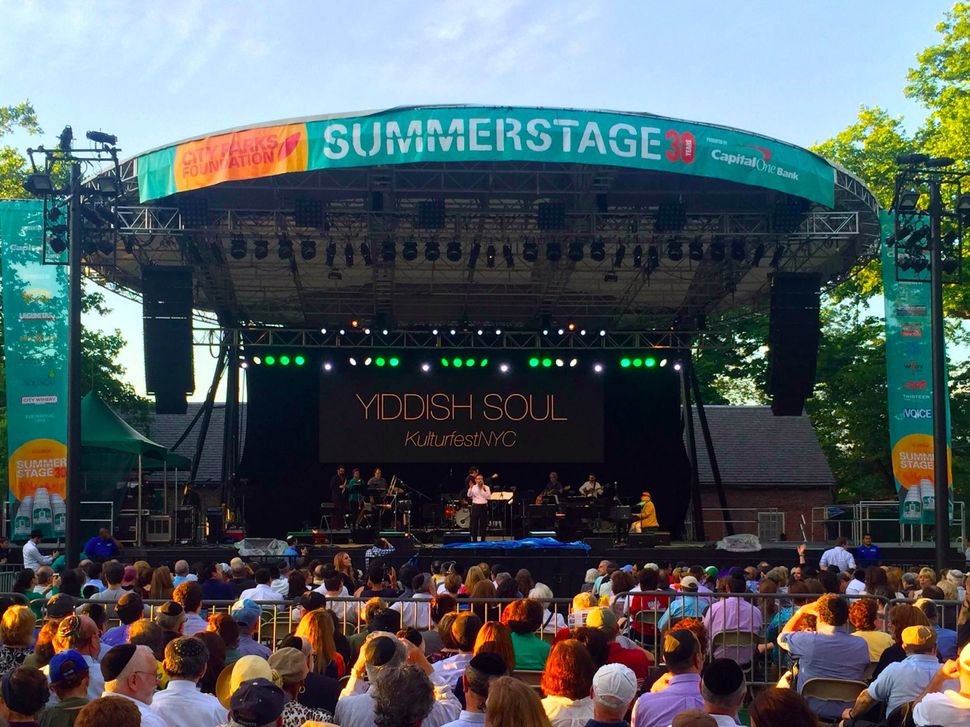 It’s as if the rain knew to stop precisely at 6 o’clock. After one of the wettest days of the month, the sky turned from gray to blue, the clouds parted for the last hour of Tuesday sun, and Yiddish Soul took the stage at Central Park’s Rumsey Playfield. The concert, a showcase of cantorial and Hasidic music, kicked off the third night of Kulturfest, the largest Yiddish cultural festival in the Big Apple since the 1930s.

Hundreds of concertgoers gathered in the park’s SummerStage venue to hear Hasidic popstars Lipa Schmeltzer and Avraham Fried, and cantors Netanel Hershtik, Joseph Malovany of New York’s Fifth Avenue Synagogue, and Yanky Lemmer of Lincoln Square Synagogue. The cantors were joined by a full band – including trumpeter Frank London, a Grammy-winning artist and titan of the Klezmer revival – and by Zusha, a popular neo-Hasidic indie band from Brooklyn.

“We’re here in New York, singing in Yiddish for all the segments of our community, right to left, up and down, as I like to say,” said the emcee, Nachum Segal, who also hosts the Jewish radio show JM in the AM, broadcast on 91.1-FM from six to nine every morning. Some women wore long skirts and formal dresses, while others wore short-shorts and oversized sunglasses. Some men showed up in gym clothes and baseball caps, while others came in yarmulkes and top hats, tzitzit dangling below their belts.

Avraham Fried sang about the future – what it’ll be like when the Messiah comes and when the third Temple is built. Molevany, who sparked a great Jewish musical revival in Russia at the fall of the Soviet Union, wore a white tuxedo jacket and a bowtie. Lemmer also sang about the coming of the messiah – when Solomon will teach us wisdom, David will play the harp, Moses will teach us secrets of the Torah, and Aaron will bless us.

Lipa Schmeltzer, a frum, Borough Park artist with mainstream appeal, came out rapping in jeans and a button down. “When I say oy, you say vey. Oy? Vey! Oy? Vey!” he yelled, pointing at his listeners and banging a tambourine against his chest.

“Keep your eyes and ears and hearts open,” said one member of Zusha. The Yiddish band is perhaps best known for its nigguns, repetitive tunes with no words. The melodies loop over and over again to transport listeners to a spiritual place, and as they get louder and louder, they become increasingly uplifting. The music feels at once soulful and exotic.

“I first heard Zusha when I was at Limmud New York, and I fell in love,” said concertgoer Josh Krug, 27, a student of Education and Jewish Studies at NYU and resident of Crown Heights. “I like the spirituality, the feel of it, the creativity, the mixing of different influences in the music.”

Krug explained that there were no female performers because of kol isha, a tradition that prohibits a woman from singing alone in front of men, in order to maintain her modesty.

By the end of the concert, energy was so high that the musicians were doing cartwheels onstage. And in the back of the crowd, some were reciting maariv, the evening prayer, by the exit gates.

Krug understood very little Yiddish – he’s fluent only in Hebrew – but he said the concert was powerful nonetheless. “These cantors have been singing this stuff for generations,” he said, “and it’s an amazing, beautiful tradition.”