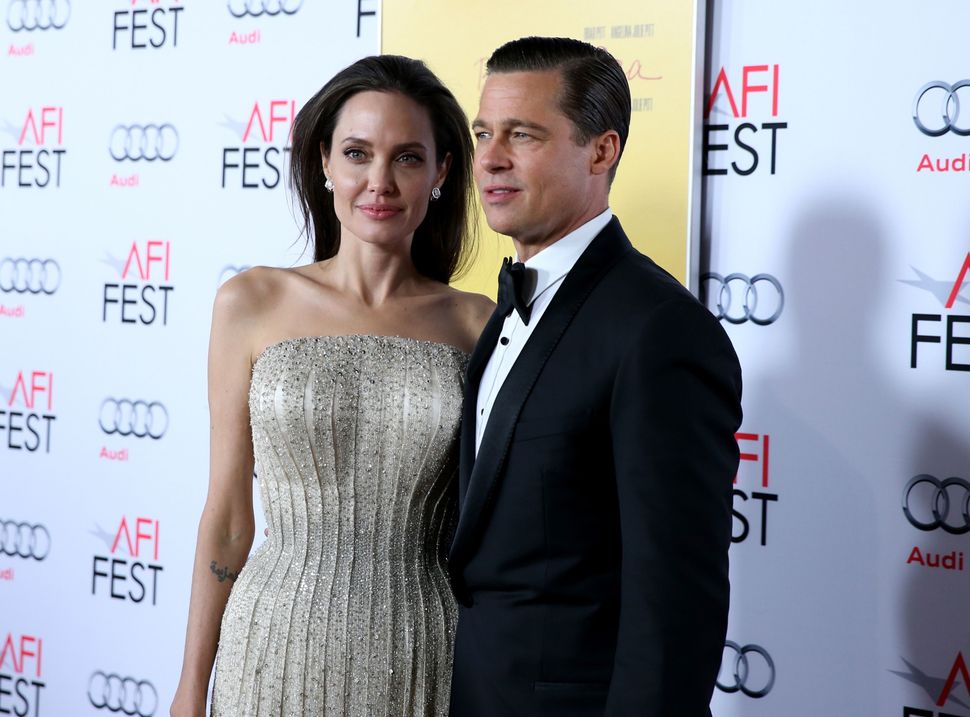 Brace yourselves. Hollywood’s golden couple Angelina Jolie and Brad Pitt are reportedly no more. The actress reportedly filed for divorce from Pitt, citing irreconcilable differences. According to TMZ, Jolie is asking for full physical custody of their six children, with Pitt getting visitation rights.

In light of this Tinseltown bombshell (no, really, who thought Brangelina would ever split?), we dug through the archives to pull out Jolie’s profile as an honorary member of Forward 50.

Even though Jolie isn’t Jewish, her outspoken discussion of her breast cancer ordeal resonated with Jewish women, who are disproportionately affected by a genetic mutation that can cause the disease.

What was Jewish about Angelina Jolie’s decision to have her breasts surgically removed? Everything.

The Hollywood superstar stunned million of fans with the stark and eloquent announcement that she had chosen to proactively undergo the procedure to reduce her risk of contracting breast cancer. Jolie, whose mother died from breast cancer, explained that she took the dramatic step after discovering she carries the BRCA gene mutation, which is disproportionately prevalent in Ashkenazi Jews.

It’s a wrenching choice for any woman, as thousands of Jewish families have discovered firsthand. It may be even tougher for the willowy Jolie, 38, whose acting ability and jaw-dropping beauty have earned her an enviable livelihood.

Jolie, who has made headlines for her A-list partnership to Brad Pitt and their growing brood of mostly adopted children, could have kept quiet about what is surely the most personal of choices. Instead, she enriched the debate about breast cancer and the conversation surrounding the burden that many Jewish women bear because of the BRCA mutation.

Within days, doctors reported dramatic increases in numbers of women seeking testing for the dreaded mutation. Others asked what they could do to inform friends or synagogue members about their potential ticking time bombs. The news inspired Jewish activists to pursue what turned out to be a winning Supreme Court battle against a biotech company’s effort to patent the mutated gene.

Call it a Jewish teachable moment, courtesy of one of the most beautiful women on the planet.