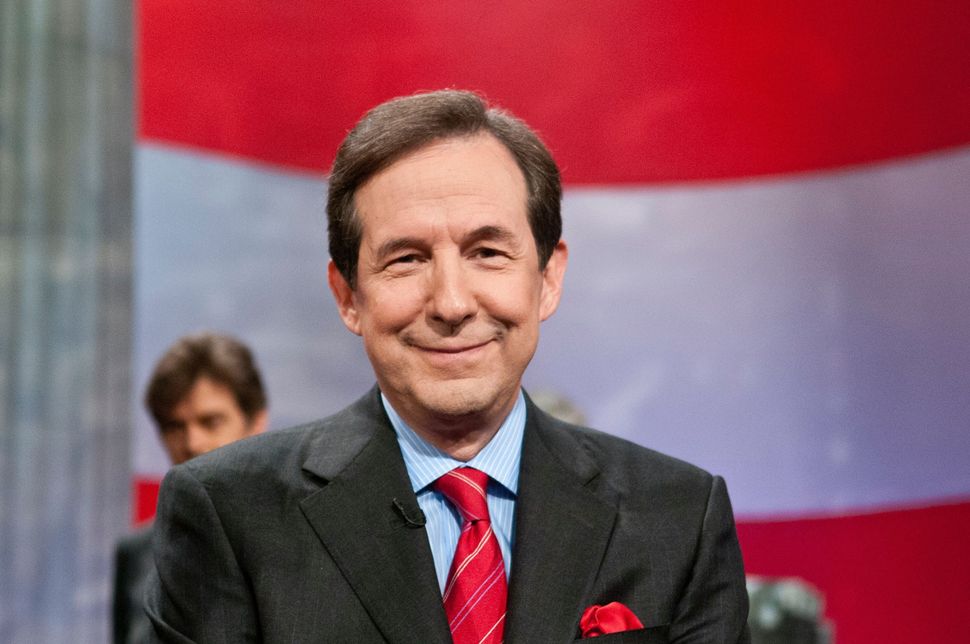 When Donald Trump and Hillary Clinton took to the stage for their final presidential debate, they were joined by moderator Chris Wallace, the Fox News anchor and political commentator who also happens to be Jewish.

Here’s everything to know about the man who wound up in the middle of another nasty face-off between the two candidates.

He’s got journalism in his blood.

The 69-year-old is the son of legendary 60 Minutes reporter Mike Wallace and producer/editor Norma Kaphan. His parents, both of whom were Jewish, split up when he was a baby. Wallace’s mother later re-married former CBS News President William Leonard.

His father was a practicing Jew.

Mike Wallace, the son of Russian immigrants, recited the Sh’ma prayer every night before he went to sleep. He was often accused of being a “self-hating Jew” because of some of his hard-hitting investigative pieces about Israelis and Palestinians — an idea he earnestly rebutted.

“I have long admired the courage and determination of the Israelis and sympathized with their yearning for a secure state,” Mike wrote in a piece about his coverage of Israel. “I have similar feelings about the Palestinians. But I’m an American reporter, a Jew who believes in going after facts on the ground, as Daniel Pearl did, and reporting them accurately, let the chips fall where they may.”

Chris Wallace is the first Fox News anchor to be a general-election debate moderator.

And the people over at Fox are delighted.

“I think, with Chris Wallace at the debate, it’s really showing that the hard work we’ve put into the news product over the years, when no one was paying attention to us, has really paid off,” Jay Wallace, Fox’s executive vice president told the New York Times.

This is mostly for practical purposes, he explained.

“The reason I’m a registered Democrat is that in Washington, D.C., there is really only one party,” Wallace told the Washington Post. “If you want a say in who’s going to be the next mayor or councilman, you have to vote in the Democratic primary.”

He’s had a record for calling Donald Trump out on facts and figures.

During a Fox News debate in March during the Republican primary, Wallace was so sure that Trump was going to miscalculate how much would be needed to close up the federal deficit that he had a graphic prepared ahead of time as a rebuttal.

Turns out, Wallace was right to have that slide on hand, and ended up pulling it up to correct Trump’s calculations.

“I think it’s literally the only time a graphic has gotten an ovation at a debate,” Wallace said.

Maybe that’s why Trump is not exactly his biggest fan.

The republican nominee took to Twitter last June to say: “The great Mike Wallace covered me in a much more professional manner than his son, Chris Wallace of @FoxNews. Mike was a total pro!”

The great Mike Wallace covered me in a much more professional manner than his son, Chris Wallace of @FoxNews. Mike was a total pro!

He’s not going to be “the Truth Squad” during the debate.

Wallace said that he will not step in and fact check during the debate. He will, however, keep a keen eye on the time.

“I certainly am going to try to maintain some semblance of equal time if one of them is filibustering, I’m going to try to break in respectfully and give the other person a chance to talk,” he said.

And he’s definitely feeling the pressure.

“This is a high wire act,” he told Fox News. “Certain elements of the media can or will use anything you say or don’t say against you.”