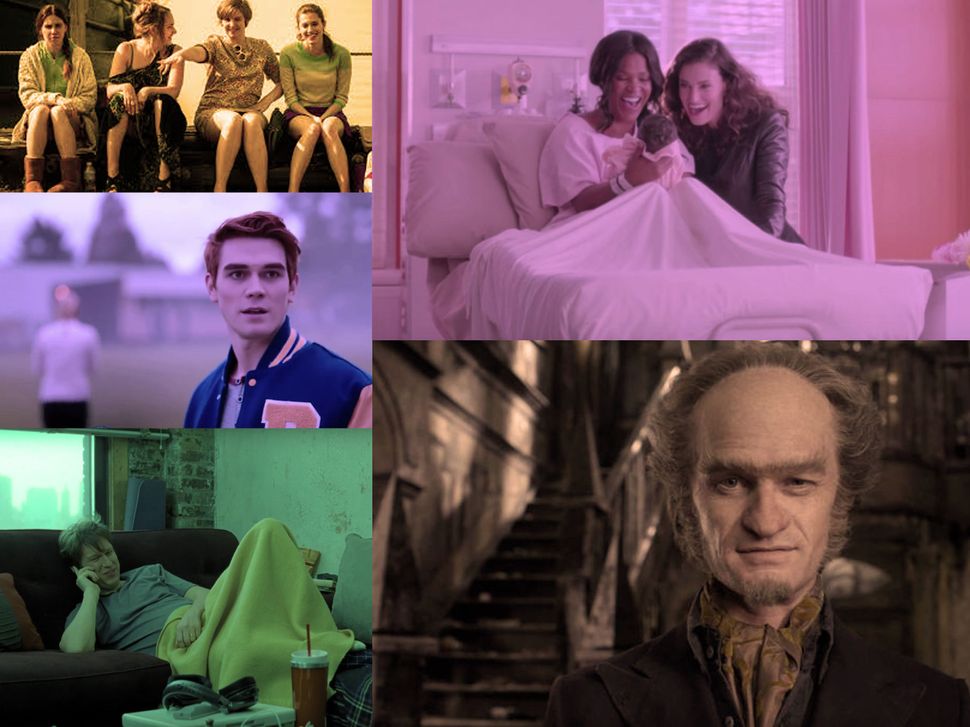 Time to borrow your roommate/best friend/significant other/random work colleague’s Netflix password. It’s a new year, and there’s endless new television to binge watch. We’ve picked out just a few shows that you need to check out, each with big name Jewish talent attached.

John L. Goldwater, the late Jewish creator of “Archie and Pals,” might have raised an eyebrow had he seen the trailer for the new dark and sexy television reboot of his beloved comic book series. On January 26, The CW is bringing back the whole gang, only this time it’s a live-action drama with a whole lot more mystery, and some very steamy teenage romance. Riverdale has never been more intriguing.

Judd Apatow has made a name for himself on the small screen, first with the beloved short-lived hit “Freaks and Geeks” and most recently as producer and writer of HBO’s “Girls.” Now he’s making another splash with the upcoming comedy “Crashing.” The show, which premieres February 19, centers on a comedian who is forced to crash at the homes of various other comics after his wife leaves him. Apatow will be directing the new HBO show, while comedian Pete Holmes, who created the series, will star.

The final season of “Girls” is upon us, and it’s time to say goodbye to Hannah, Jessa, Marnie and Shoshanna. If the trailer is any indication, the four women are still fighting, healing, falling in love and figuring out their place in the world. The Brooklyn girls you love (and, let’s be real, hate) return to the small screen February 12.

The 1988 dramedy “Beaches” is getting a remake, with Idina Menzel taking over Bette Midler’s lead role. The Lifetime movie will premiere January 21, and we’re excited for just about any excuse to listen to Menzel belt out her dreamy rendition of “Wind Beneath My Wings.”

Step back inside the gothic, playfully twisted mind of the Jewish author Daniel Handler with this television adaptation about the hapless Baudelaire children and the cruel Count Olaf (played this time around by Neil Patrick Harris). Handler will serve as executive director of the series, which will hit Netflix on January 13.