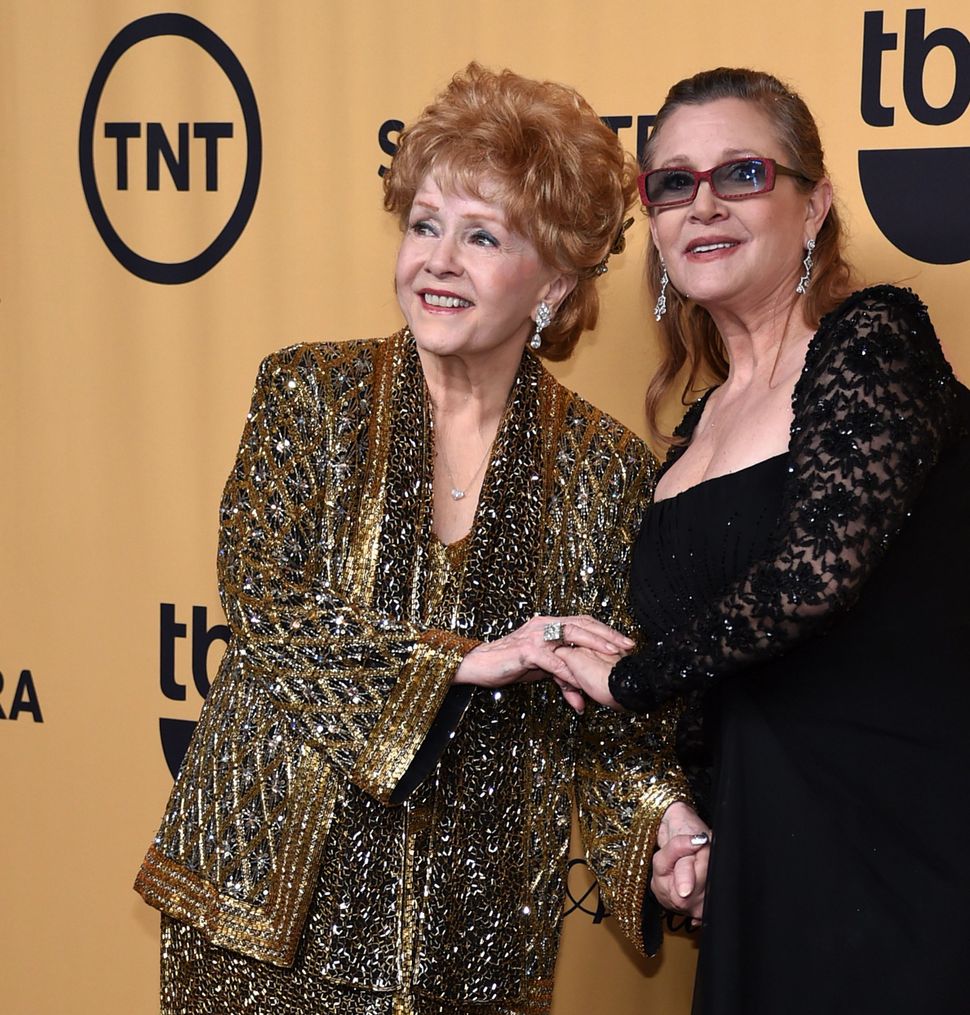 Whether you hated 2016 or loved it, take some time this weekend to celebrate its exit in style – through plenty of New Year’s events, timely movie screenings, and a thoughtful look back at the year’s best moments

Actress, author, and mental health advocate Carrie Fisher passed away on Tuesday, and the outpouring of love and grief that followed brought gemlike memories of her wit, honesty, and brilliance. Listen to her November interview with NPR’s Terry Gross, read the Forward’s Curt Schleier’s memories of interviewing her, and watch her first audition for “Star Wars.” And then, since Fisher’s mother, Debbie Reynolds, passed away on Wednesday, take a moment to remember their marvelous, if sometimes contentious, pairing.

At the end of a year marked by political vitriol and the deaths of a multitude of beloved cultural figures – David Bowie, Prince, Alan Rickman, Fisher and Reynolds, to name just a few – it’s worth remembering the art that enriched our world during 2016. The Forward asked staff members and Jewish luminaries alike to share their favorite cultural moments from the year. If you loved the same things – “Fantastic Beasts and Where to Find Them,” say, or “Lemonade” – use the list as an opportunity to remember them. More importantly, take note of what you missed. 2017 could use a good start; what better way to give it one than with a great new book, movie, or play?

4) Catch “Fiddler on the Roof” on Broadway before it closes

The acclaimed Broadway revival of “Fiddler on the Roof” closes December 31, so New Yorkers have a precious few more opportunities to see it. If you miss that one, try for “Oh, Hello,” the uproarious ode to elderly men on Manhattan’s Upper West Side from comedians Nick Kroll and John Mulaney, which runs through January 22. Also in its last days is the Met’s “Jerusalem 1100-1400: Every People Under Heaven,” which closes January 8. The exhibit presents a rare opportunity to revisit a period of relative multicultural peace in the Biblical city, and the sheer number and range of the objects it includes astonishes.

5) Revel in the wonder of “When Harry Met Sally”

The Nora Ephron-penned, Rob Reiner-directed “When Harry Met Sally” is uniquely timely this weekend. First, it features Carrie Fisher in a spectacular supporting performance, and second, it ends on one of the most heartwarming New Year’s Eve scenes ever filmed – no spoilers. Catch a public screening in Los Angeles through the Cinemafamily on Friday. Also in Los Angeles, check out a performance of “The MeshuaNutcracker,” a very Jewish, joyfully Klezmer-influenced take on Tchaikovsky’s classic ballet.

The official lighting of the National Menorah happened last Sunday, but never fear: it’s on display on the White House grounds through the end of Hanukkah on January 1. Take a moment to appreciate the public display; in preparation, read Nathan Guttman’s take on President Barack Obama’s last Hanukkah party in office. Also in Washington, D.C., spend Saturday afternoon at the National Gallery of Art, which will screen Steven Spielberg’s first feature film, “Duel,” as a selection of the artist Barbara Kruger. Kruger’s work is the subject of an exhibit at the National Gallery through January 22; take a swing through it while you’re there for the film.

7) Read the last, best longform journalism of the year

Aside from the installment of tributes to Carrie Fisher, the last weeks of the year have brought notable longform from New York Magazine’s Abraham Riesman, writing on the fresh relevance of Alfonson Cuarón’s 2006 film “Children of Men,” Boston Magazine’s Simon van Zuylen-Wood, diving into the longstanding case of “The World v. Alan Dershowitz,” and Nobel laureate Joseph E. Stiglitz, writing for Vanity Fair’s Hive on the potentially catastrophic economic impact of President-elect Donald Trump’s economic policies.