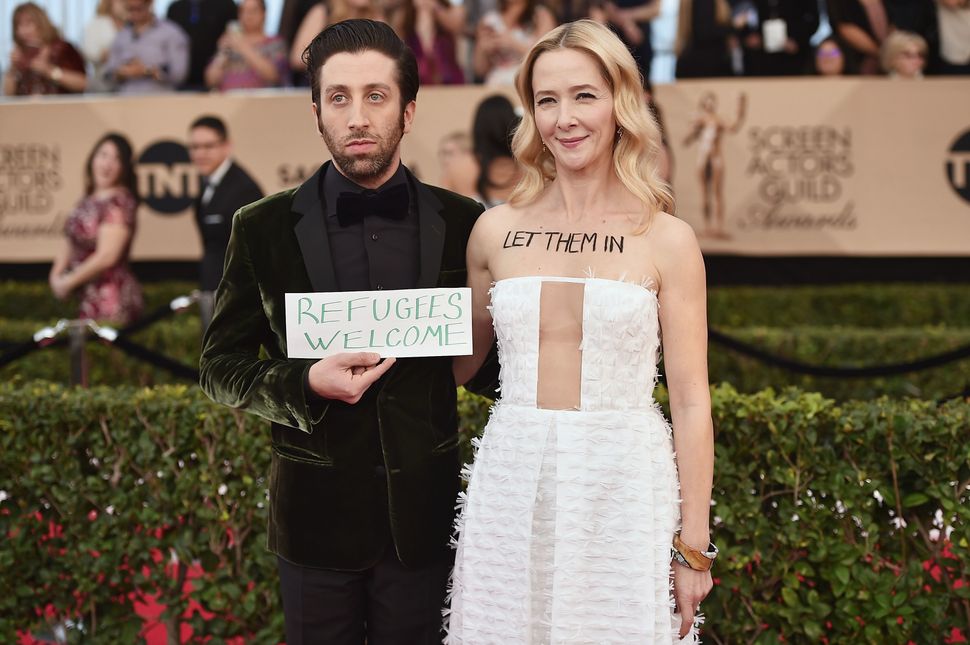 Helberg carried a sign that read “Let Refugees In,” while his wife, Jocelyn Towne, wrote the words “Let Them In” across her chest. The 36-year-old Jewish actor has been actively taking a stand against the ban on Twitter, retweeting the names of Jews who died in Auschwitz because they were turned away from the U.S. border.

My name is Erna Dora Dublon. The US turned me away at the border in 1939. I was murdered at Auschwitz pic.twitter.com/ufISrUsyJz

Helberg was just one of the many SAG Awards attendees who spoke out against Trump’s executive order, which halted immigration from seven predominantly Muslim countries.

Ashton Kutcher kicked off the award show with a message of inclusion.

“Good evening, fellow SAG-AFTRA members, and everyone at home, and everyone in airports that belong in my America,” he said. “You are a part of the fabric of who we are. And we love you and we welcome you.”

The actor, who has been married to Mila Kunis since 2015, took to Twitter to denounce the ban on Sunday.

“My wife came to this country on a refugee visa in the middle of the Cold War! My blood is boiling right now!” he wrote.

My wife came to this country on a refugee visa in the middle of the Cold War! My blood is boiling right now!