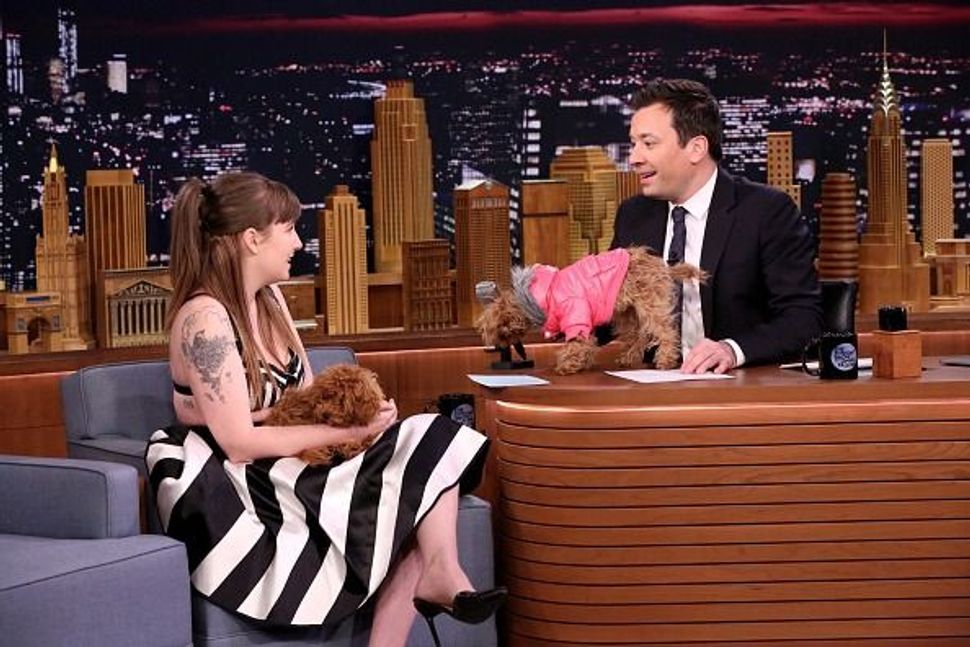 As the saying goes: Bite my butt once, shame on you. Bite my butt twice, I’m giving you back and replacing you with baby poodles.

Lena Dunham issued an emotional Instagram post yesterday explaining that she and her boyfriend, musician Jack Antonoff, were forced to give up her beloved dog Lamby.

“After four years of challenging behavior and aggression that could not be treated with training or medication or consistent loving dog ownership,” Dunham wrote, “Lamby went to live at an amazing professional facility in Los Angeles.”

A lot of you have been asking where Lamby is these days since he’s always been the star of my gram and I’ve been posting pics of my poodle girls. Well, you know honesty is my jam but this one has been really heartbreaking to talk about. But I feel I have to share that last March, after four years of challenging behavior and aggression that could not be treated with training or medication or consistent loving dog ownership, Lamby went to live at an amazing professional facility in Los Angeles @matt_thezendog where an awesome person named @therealdanishay (who is educated in a rescue dog’s specific trauma) loves him so hard. Lamby suffered terrible abuse as a pup that made having him in a typical home environment dangerous to him and others- we needed to be responsible to ourselves, our neighbors and especially our beloved boy. Jack and I will miss him forever but sometimes when you love something you have to let it go (especially when it requires tetanus shots and stitches.) Someday I’ll really write about the pain and relief of letting Lamby go off and really be Lamby, biting and peeing in his own mouth and all. There were so many lessons in it, about forgiving myself and loving with an open palm and giving in to a larger plan. Shout out to @jennikonner for listening to endless hours of Lamby pain, and especially my partner @jackantonoff for loving him even when he ruined floors and couches and our life. Jack knows what Lamby means to me and he let me come to the decision in my own time even when it made his days challenging. Susan & Karen will never be my first loves, but they are fuzzy and hilarious stuffing for the hole Lamby left and we cherish them deeply ❤️#lamby #thefirstcutisthedeepest #foreverlamb PS If you have a similar situation, please know its possible to responsibly re-home your rescue rather than sending them back into the shelter system. It can require patience, diligence and often a financial contribution but there are solutions that leave everyone happy and safe. You will always have been your dog’s first stop outside shelter life and that’s beautiful.

Like Lena Dunham herself, Lamby has become a polarizing figure over the years. The adorably woebegone-looking Lamby was a fixture on Dunham’s social media (he had his own Insta) and in her writing. But after uploading a picture of her own backside, clothed but spotted with coagulated blood after being bitten by Lamby, both dog and Dunham faced backlash. Gawker wrote a vicious article insisting that Lamby be take away from Lena, claiming that she “does not care enough about Lamby to keep him from going around biting people.” Then, after Dunham tweeted a defense, Cosmopolitan magazine wrote a retort to Gawker asking that we “stop shaming Lena for adopting a dog that needs some extra care.”

We have a special-need rescue dog who has bitten me twice, under specific circumstances, in our own home… He has an amazing trainer…

Dunham alluded to the true health and safety concerns involved in caring for Lamby in her Instagram post, saying, “Jack and I will miss him forever but sometimes when you love something you have to let it go (especially when it requires tetanus shots and stitches).”

She added, “If you have a similar situation, please know it’s possible to responsibly re-home your rescue rather than sending them back into the shelter system.”

Before re-homing Lamby, Dunham adopted two poodles, Susan and Karen, and introduced them during a visit to the “Tonight Show” last February, where she described Lamby, in absentia, as “more of a laid-back West Coast dude.”

Truly, having to let go of a dog after four years of loving pet ownership is incredibly painful, and our hearts go out to anyone who has had to make that decision. A true cultural philosopher might recall that in March 2015 Lena Dunham wrote an article in the New Yorker that jokingly compared her dog to her “Jewish boyfriend”, listing similarities like “he doesn’t tip”, and “he comes from a culture in which mothers focus every ounce of their attention on their offspring and don’t acknowledge their own need for independence as women.” This article was derided by many, including the Anti-Defamation League, for resorting to Jewish stereotypes and comparing a Jew to a dog. It is exciting to realize now that Lena Dunham was not comparing Jewish men to all furry friends, but specifically to a dog who cannot safely live among regular humans due to behavioral issues, incontinence, and a butt-biting problem.

On the “Tonight Show”, Dunham told Jimmy Fallon that her two new poodles are cousins, one Italian and one Jewish. Susan, the Jewish dog, spent the rest of the interview biting Fallon’s hand.

Dunham, Susan, and Karen on “The Tonight Show”: