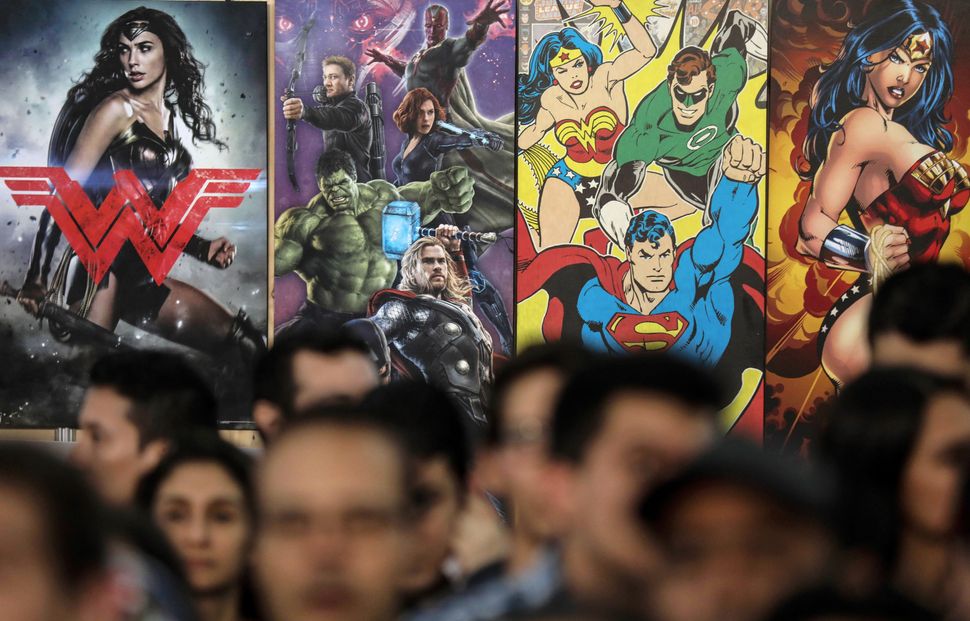 This right here, folks, is your guide to the Jewish highlights of San Diego Comic-Con 2017.

True, there are a number of exciting panels on offer, from a series celebrating the centenary of legendary comic book artist Jack Kirby to Gal Gadot talking about her next appearance as Wonder Woman in the upcoming “Justice League.”

But we doubt anything will live up to the beautifully titled “A Bunch of Jews (A Minyen Yidn),” during which a panel will reflect on the recently-released graphic novel of the same name.

Read on for more information, as well as the rest of our top picks for the weekend.

The titular graphic novel has a great name and presumably tells a great story; this panel will undoubtedly bring great joy to each and every Comic-Con-going Yiddishist, of whom we assume there are many.

Geller and Kirby’s never-completed film “Lord of Light,” ended up forming a cover for the CIA rescue of American diplomats from Tehran during the Iranian hostage crisis. (The expedition was the subject of Ben Affleck’s 2012 film “Argo.”) In an early highlight of Comic-Con’s weekend-long celebration of Kirby, Geller and Mike Royer relate the story of the unmade film.

The top guns in the “Ghostbuster” franchise, including its co-creator, Ivan Reitman, discuss where the shtick-filled series of films, comic books and more has been, and where it’s going. Why the panel is billed as “biblical” remains unclear, but if that doesn’t entice you, what will?

4) Immerse yourself in the espionage of “Kingsman”

2014’s “Kingsman: The Secret Service” won hearts with its depiction of stylish espionage. Its sequel “Kingsman: The Golden Circle” arrives this fall, and this panel sees its googly-eye-worthy stars (Colin Firth, Halle Berry, Channing Tatum, oh my) in conversation with the films’ screenwriter, Jane Goldman, as well as the series’s co-creator Dave Gibbons.

6) And celebrate Will Eisner, some more

Thursday closes out with yet another Eisner-fest: A screening of the documentary “Will Eisner: Portrait of a Sequential Artist,” which includes interviews with the likes of Art Spiegelman and Michael Chabon.

1) Tired of celebrating Will Eisner? Take a break and celebrate Stan Lee

We need hardly tell you that Stan Lee, born Stanley Lieber, is a comics-world titan. This is your chance to hear celebrities like Felicia Day and Adam Savage wax poetic about one of the minds behind Spider-Man, Thor, and more.

2) Get psyched for “Marvel’s The Defenders”

Marvel won acclaim for its Netflix series “Daredevil,” “Jessica Jones” and “Luke Cage,” and we won’t mention “Iron Fist.” (Whoops.) The four titular superheroes will join forces in the upcoming “Marvel’s The Defenders,” also on Netflix; in this panel, Marvel TV head Jeph Loeb talks about the show with Mystery Guests. (They’ll probably be famous.)

Could a superhero have a more generic name than “Future Man?” Inconceivable! Still, if Seth Rogen is involved, we’re tentatively on board. He’s directing the upcoming Hulu series, which stars that cute man-child from “The Hunger Games” (a.k.a. Josh Hutcherson); at this panel the duo, plus other members of the show’s cast and creative team, will discuss the series.

We mean that strictly metaphorically, and since Abbi Jacobson and Ilana Glazer, creators and stars of the Comedy Central hit, are patently hilarious, euphoria shouldn’t be hard to come by. The two give a preview of the show’s upcoming fourth season; based on the trailer, it should be unmissable.

Sold, right? This panel of dystopians includes Cory Doctorow, author of the novel “Walkaway” and journalist and author Annalee Newitz. Just remember, none of it is real — yet.

The last Jack Kirby item on our list is illustrator and comic book historian Arlen Schumer’s reflection on how Ya’akov Kurtzberger, a scion of the Lower East Side’s immigrant Jewish community, turned into a comic book legend. Go forth and kvell.

3) Freak out over Gal Gadot

If you left “Wonder Woman” with a burning need for more stories about Diana Prince, Warner Bros’s take-over of Comic-Con’s Hall H is the event for you. Gadot, Ben Affleck, Jason Momoa and more will talk about this fall’s “Justice League,” which will see them — presumably — fighting for justice. And as a side benefit, you’ll get to see Steven Spielberg discuss his upcoming film “Ready Player One.”