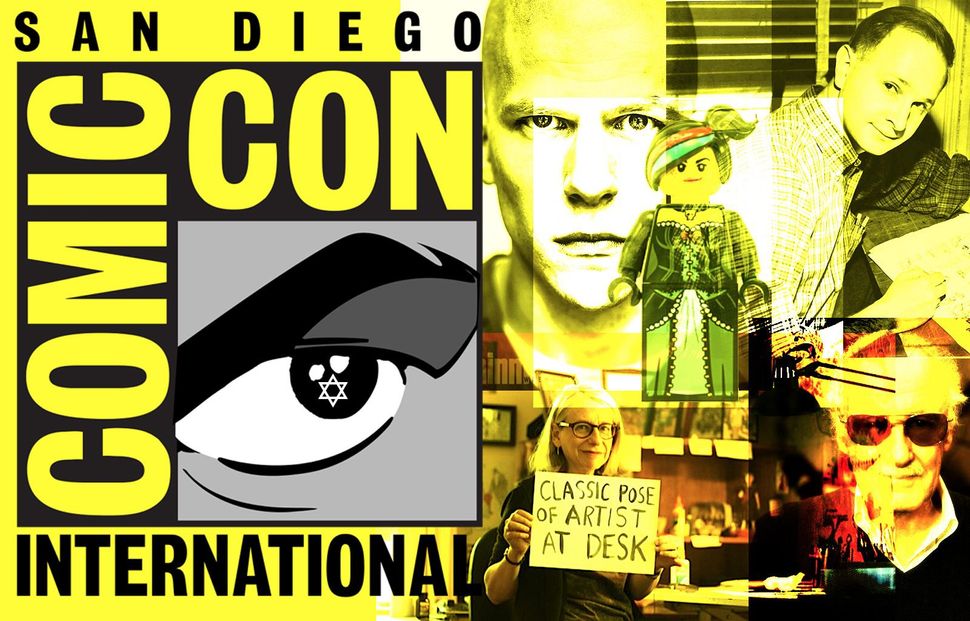 My friends, it is that time of year again. The time for worldwide fans and lovers of all kinds of entertainment to gather at the capital of geek-dom, San Diego, for the annual . The wild ride that is the biggest comics convention in the U.S. started July 8 and ends on Sunday night.

Now, despite being a cartoonist, I have never been to SDCC. I admit, I have not yet found the courage for such a feat. San Diego Comic Con may be the Mecca of nerdiness, but it is a very crowded and overwhelming one. Nevertheless, it is also chockfull of action and fun. From cosplayers dressed as their favorite comic and TV characters, to panels with TV and Hollywood’s greatest stars, to cartoonists and writers selling and signing their wares, there are always way too many great things to do.

If you are attending or following SDCC this year, here are some Jewish things to know about the history of SDCC, as well as some of the best Jewish events this year:

1) San Diego Comic Con was started by a Jew. When Shel Dorf moved from Detroit to San Diego in 1970, he launched a small convention that mirrored the one he had helped organize in Detroit. He called it the Golden State Comic-Con.

2) The comics’ Oscars, The Will Eisner Comic Industry Awards, or the Eisner Awards for short, are held every year at SDCC. They are named after popular Jewish cartoonist Will Eisner, most known for his comic “The Spirit.” Later in life, he moved on to writing stories with a more Jewish tone, like ” A Contract with God, and Other Tenement Stories”.

3) Some Jewish nominations for the Eisners this year, are Jules Feiffer’s “Kill My Mother”, Roz Chast’s “Can’t We Talk About Something More Pleasant?” as well as “Graphic Details: Jewish Women’s Confessional Comics in Essays and Interviews”, edited by Sarah Lightman, which started in the very pages of The Forward.

4) Rutu Modan was the first Israeli to win an Eisner Award for her graphic novel “Exit Wounds”, which involved a long lost father, a disappeared lover and terror attack.

5) This year’s Jewish guests include Asaf Hanuka, Tomer Hanuka and Boaz Lavie who are debuting their graphic novel, “The Divine”. Asaf and Tomer are twins and both cartoonists and illustrators and have more then one Eisner nomination under their belt, including for Asaf’s collaboration with Etgar Keret, “Pizzeria Kamikaze”. Asaf’s personal strip “The Realist” is a very moving chronicle of his life in Israel with his wife and children.

6) “Batman v. Superman: Dawn of Justice”, the Jewiest superhero movie in a long while, is slated to have a looming presence in this year’s SDCC. It stars our favorite queer Jew, Ezra Miller, as The Flash, Jesse Eisenberg and his bald head as Lex Luthor, and of course, more importantly, Gal Gadot. The gorgeous Israeli model and actress will be Wonder Woman. We’re so psyched for this movie!

7) Another Jewish guest this year is Lev Grossman, author of the wildly popular “The Magicians.”

8) Like in many SDCC’s of years past, Stan Lee will be in attendance. The man who invented Spider-Man and most of your other favorite superheroeswas born Stanley Martin Lieber, so yes, in case you somehow missed it, he’s one of us.

9) The first episode of Ryan Murphy’s new show “Scream Queens” will premiere at this year’s SDCC, featuring gorgeous Sephardic Lea Michelle in a back brace? Full body brace? We’re not sure. Either way, we’re intrigued. Terrified, but intrigued.

10) “Star Wars: Episode VII – The Force Awakens” is the talk of the town. Its director, the very Jewish J. J. Abrams, will be in attendance this year at SDCC, along with screenwriter, Lawrence Kasdan, who is also a Jew. The movie has some Jews in its cast as well, including Harrison Ford, Carrie Fisher and Oscar Isaac (“Isaac is Jewish from my father side. I am definitely a big mix of many things”), but it remains to be seen whether they will make an appearance. The Star Wars panel promises to feature many good things, but no new trailer for the upcoming installation. Patience you must have, my young padawans.

11) The very last installment of “The Hunger Games” is coming out soon, and the movie’s main stars will be panelling at SDCC. This movie is a last chance to see Elizabeth Banks as Effie Trinket, the formerly glamorous escort of district 12 tributes. She one of the brightest and definitely the most entertaining character in the movie series, and we’ll be sad to say goodbye to her in “Mockingjay: Part 2”. Want more Elizabeth Banks at Comic-Con? Lego DIMENSIONS will have a statue of her character Wyldstyle from the LEGO Movie.

12) Just like in years past, Chabad of San Diego is hosting a Shabbat dinner (Kosher noms! Hoorah!). Mordechai Lightstone co-organized the dinner last year and had a fabulous time. Feel like doing a mitzvah this weekend? Consider donating blood at the Robert A. Heinlein Blood Drive 2015. And speaking of mitzvot, make sure to read this hilarious list by Cantor Eric Schulmiller of an improved SDCC anti-harrasment policy (warning: serious LOLs ahead).

13) UPDATE: One of our favorites, Seth Green, just posted his SDCC schedule on Instagram! Wish we could go to that Robot Chicken panel. 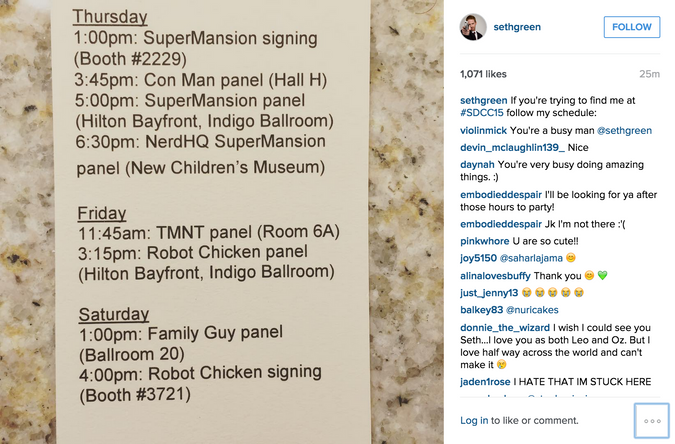 With great power —  like an SDCC pass — comes great responsibility. May the force be with you this weekend.

Missed anything Jewish? Let me know in the comments please!