The Real Winners Of The World Series Are The Jewish People 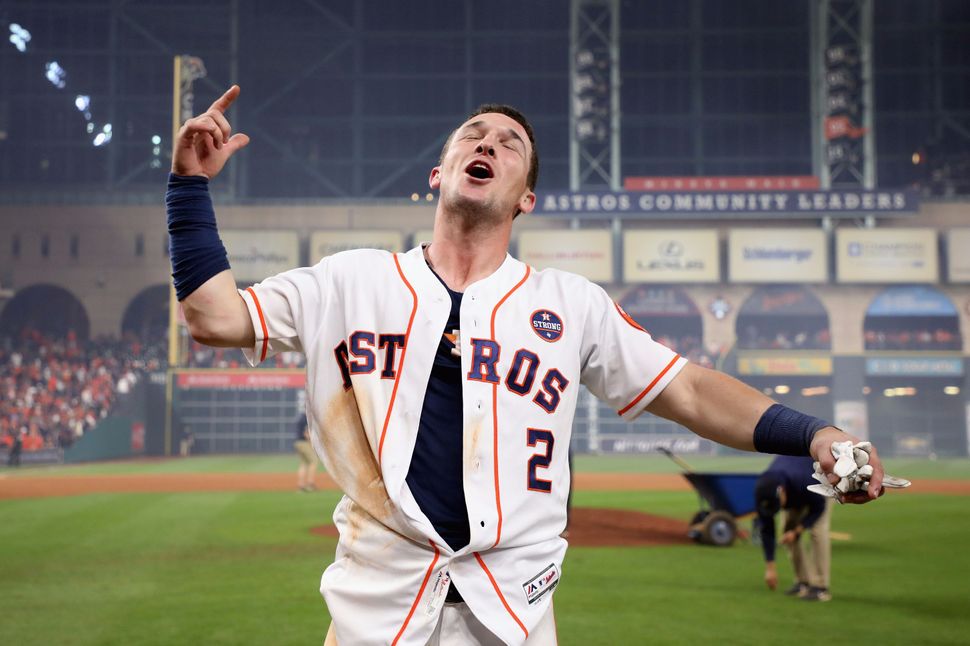 It feels good to triumph. Image by Getty Images

The Miracle of Hanukkah. Our roster of Nobel Prize winners. Sandy Koufax’s refusal to play on Yom Kippur. It’s hard to say which story Jews have been dining out on the longest. Now we can add another to the rotation: the year when each World Series team had its own Jewish superstar.

Let’s take a look at what made this World Series a watershed moment for the Jews.

Joc Pederson hit the most home runs ever by a Jewish player in the World Series.

And Alex Bregman led his team to World Series success.

Alex Bregman, the 23 year-old Astro’s infielder, clinched game five after a nearly recored-breaking five hours and 17 minutes with a walk-off. But even before Bregman’s star-turn in the World Series, his story was that of a shortstop Cinderella. Descended from a family of ball players, Bregman showed magnificent promise before shattering his knuckle and waiting through 29 rounds of the Major League Draft in 2012. Bregman chose college at LSU instead, where he cheerfully wore a number 30 jersey to indicate the number of teams that had passed on him. He went on to be second pick in the first round of the 2015 draft, going on to be the youngest member of Team USA in 2017. Bregman attended a Reform synagogue, Congregation Albert, growing up in Albuquerque. And if you’re willing to fully commit to an irrevocable sexual attraction to Bregman, you can read about how he studies Spanish so he can better communicate with his teammates. “This guy legitimately wants to be the best baseball player that’s ever been,” his college coach has said.

It’s a testament to how little my wife and I talk sports that I JUST found out Alex Bregman went to her temple. #TookAWalkOff

According to a genealogist for the Jewish Journal, Joc Pederson’s family immigrated to America from Jewish communities in France, Amsterdam, Germany and Russia in the 19th century. The 25-year-old centerfielder’s great-great-great-grandfather and great-great-great-uncle were charter members of the historic synagogue Temple Emanuel in San Francisco. And Pederson’s baseball story is an appropriately Jewish one of hard work and redemption — Pederson suffered a 31-game no-homer streak and barely made it onto the Dodgers’ postseason roster. Now, Jewish Baseball News points out: “Pederson’s performance in this Series isn’t just notable within the narrow universe of Jewish major leaguers, of which there have been roughly just 170. The 25-year-old’s three homers are tied for the most in Dodger history since the team moved to Los Angeles.” Alex Rodriguez himself has said that Pederson, who is being branded a “World Series star,” has less of a struggle with overthinking than the former Yankee because, unlike A-rod, “Joc Pederson never thinks.” Finally, it bears mentioning that Pederson’s on-field dance of jubilation is stuff of newly gif’d legend.

So maybe it’s time to put to rest the stereotype that Jews are bad at sports — it smells a little like self-hate, and it’s just not true. So tell your sons and daughters, when you grow up you can be anything you want: a doctor, a lawyer, a rabbi, a rapper, a gymnast, or a Major League ball player.

The Real Winners Of The World Series Are The Jewish People