Here Are The Best Jewish Moments From The 2018 Golden Globes 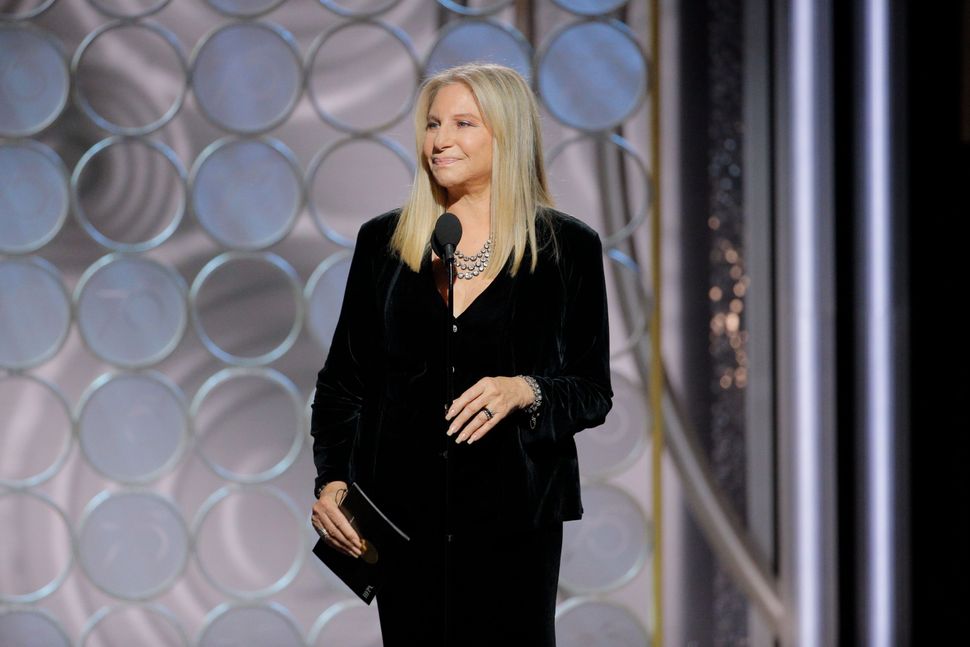 The 2018 Golden Globe Awards were a tremendous show of force (by Hollywood standards, at least) in support of women and sexually disenfranchised people. Tinseltown’s luminaries wore all black to protest sexual harassment in the industry, and some nominees brought feminist organizers as their plus-ones. The movies that took home the awards for best drama and comedy were epics of female strength — that of a mother’s vicious quest for justice in the wake of her daughter’s rape and murder (“Three Billboards Outside Ebbing, Missouri,”) and that of a young girl’s struggle to come to terms with her selfhood and her fearsome mother (“Lady Bird.”) Presenters and awardees stood up to deliver alternately seething and joyful speeches condemning gender-based oppression and violence and clamoring for change. And in every category, Jewish performers, creators, and stories were represented. Here are a few of the top moments:

Debra Messing drags E! (while being interviewed on E!): “I was so shocked to hear that E! doesn’t believing in paying their female co-hosts the same as their male co-hosts” pic.twitter.com/HF3B2uhwtF

Debra Messing Drags ‘E!’ In An Interview With ‘E!’; Drops The Term “Intersectional”: “We want diversity, we want intersectional gender parity, we want equal pay,” Debra Messing said in a red carpet interview for E!, a channel that has come under fire after female co-host Catt Sadler quit upon learning that her male counterpart was taking home double her salary. “I mean, “I was so shocked to hear that E! doesn’t believe in paying their female co-hosts the same as their male co-workers,” Messing told E!’s Giuliana Rancic, with the casual disdain of an Amazonian queen. In the future, when t-shirts can display videos, I will exclusively wear ones that display this video of Debra Messing using E! as a platform to criticize E!. 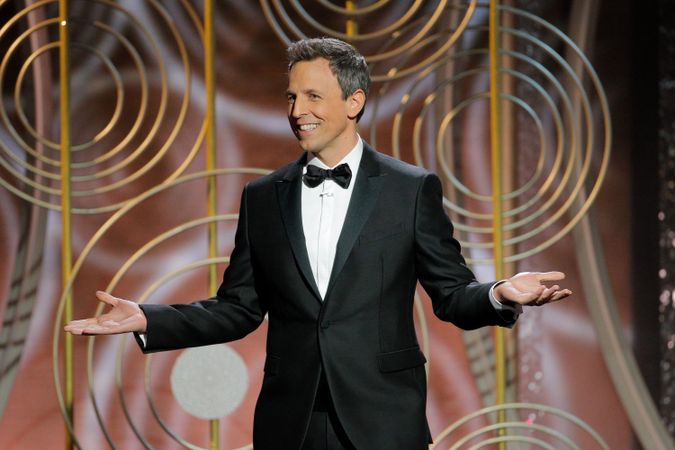 Seth Meyers, not a sea monster Image by Getty Images

Seth Meyers Insults Accused Jewish Assaulters, And We Adore It: If Harvey Weinstein’s career was dead before the Golden Globes aired, the awards show can claim responsibility for making sure that it is never, ever resurrected. Host Seth Meyers (sadly not one of ours) delivered many pointed jibes to Weinstein and other famously accused men, but he saved his best work for Woody Allen. “‘The Shape Of Water’ received the most nominations of any film this year,” he remarked in the opening monologue. “Just an incredibly beautiful film. But I have to admit, when I first heard of a film about when a naive young woman falls in love with a disgusting sea monster, I thought — oh man, not another Woody Allen movie.” The Schmooze hereby pledges our eternal allegiance to Seth Meyers and all of his progeny. 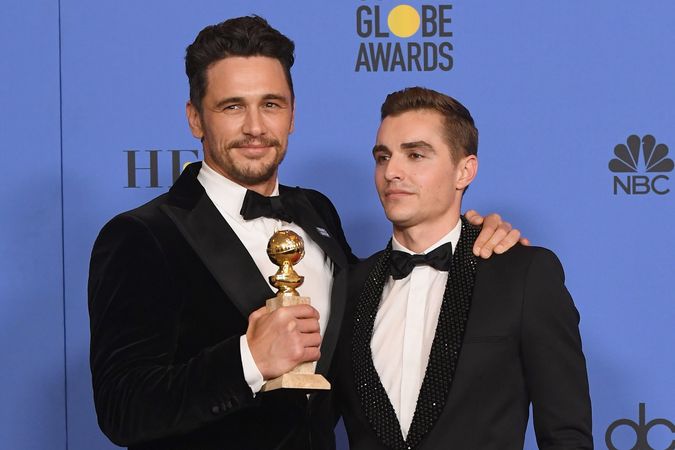 James Franco Thanks His Mother For Giving Him His Brother: Midway through the evening, James Franco raced to the stage, pulling his brother Dave by the hand, to accept his award for Best Actor In A Motion Picture Musical Or Comedy for “The Disaster Artist.” The brothers, both of whom identify strongly as Jews, were wearing complimentary glinting ebony suits and honoring the power of family. “When I went to NYU, I always said that I wanted my own Coen brother to collaborate with,” the older Franco told the crowd. “I realized this year I have my own Franco brother. Thank you to my mother for giving him to me.” If you’re wondering, the painfully cute Dave Franco is happily married to another painfully cute Jew named Alison Brie, who was herself nominated for “GLOW.”

Sterling K. Brown Honors “This Is Us” Creator Dan Fogelman’s Efforts Towards Equality: “Throughout the majority of my career I’ve benefitted from colorblind casting” Brown said as he accepted the award for Best Actor In A Television Show, Drama. Brown’s win is historic: he is the first black actor, male or female, to ever win the award. He devoted his speech to Dan Fogelman, his show’s creator and one of this year’s “Forward 50” recipients. He noted that Fogelman “wrote a role for a black man that can only be played by a black man, and so what I appreciate so much about this thing is that I’m being seen for who I am and I’m being appreciated for who I am. That makes it that much more difficult to dismiss me or dismiss anyone who looks like me.” 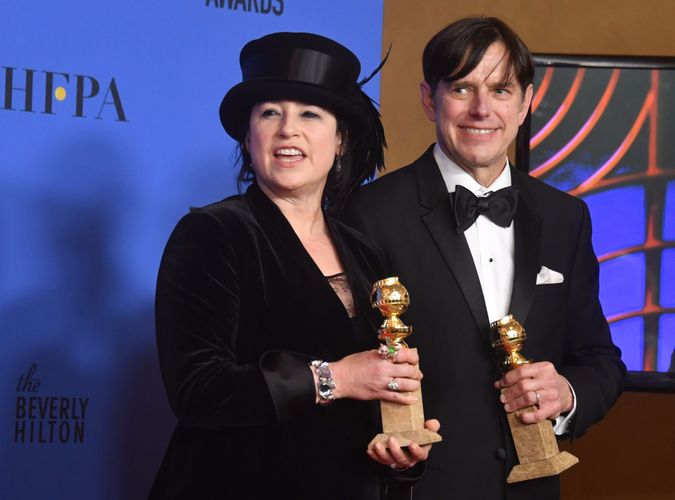 Amy Sherman-Palladino Cuts Her Acceptance Speech Short To Go In Search Of Cheese: The “Gilmore Girls” creator, whose non-conforming outfit and persona never disappoint, accepted the award for Best Television Comedy for the immensely Jew-y “The Marvelous Mrs. Maisel” in a black top hat, fishnet tights, and tails that were somehow both ruffled and made out of tulle. She thanked her “murderer’s row of actors” including Rachel Brosnahan (the tragically goyishe winner of the prize for Best Television Comedy Actress), before beckoning them stage right, saying, “there’s cheese backstage.” 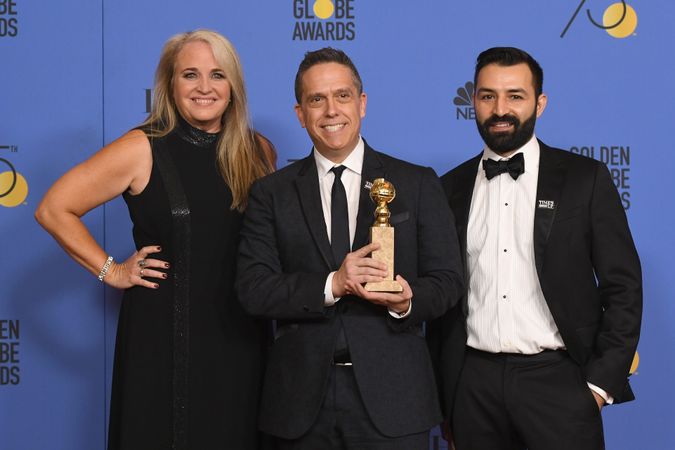 The creators of “Coco” Image by Getty Images

The Jewish Director Of “Coco” Honors The Dead And Avoids John Lasseter: “Thank you to our loved ones who are no longer with us, who in ways great and smile inspired us,” said the director of the groundbreaking “Coco,” Lee Unkrich, accepting the award for Best Animated Motion Picture. Not only did Unkrich, a Pixar veteran, invoke loss beautifully in a celebratory forum, but he also avoided thanking John Lasseter, the longtime Pixar executive who has been on leave from the company after several “missteps” that include, by Lasseter’s admission, “unwanted” physical contact. 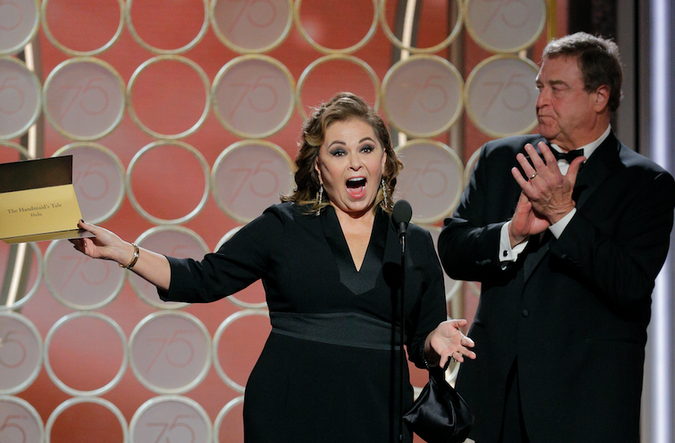 Roseanne: I’m kind of known for creating some great drama.

John: Yeah, not the kind you get awards for. 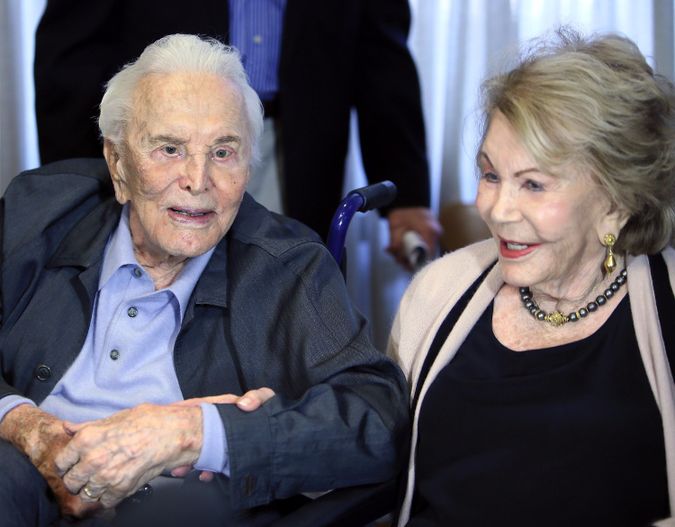 Kirk Douglas with his wife, Anne. Image by Getty Images

Kirk Douglas Gets A Standing Ovation: 102-year-old Kirk Douglas, accompanied by daughter-in-law Catherine Zeta-Jones (does she know how to look any way other than ravishing?), celebrated the 50th anniversary of his receipt of the Cecil B. DeMille lifetime achievement award. Douglas (born Issur Danielovitch) received a standing ovation and recognition for his work helping to end the Hollywood blacklist by hiring banned writer Dalton Trumbo to pen the script to “Spartacus.” 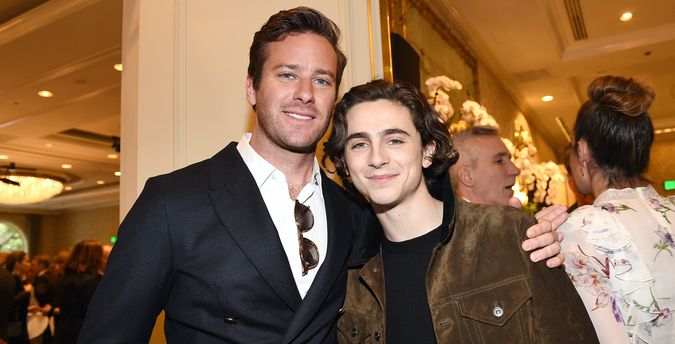 Where the boys at? (They’re at “Call Me By Your Name”) Image by Getty Images

Everything That Had To Do With “Call Me By Your Name”: True, the movie did not win any awards. But “Call Me By Your Name” is the sexiest thing to happen to the Jewish people since Ruth laid at Boaz’s feet. If you haven’t seen it, go see it. If you’ve seen it, read the book of the same name by Jewish author Andre Aciman, which I guarantee will be read by your grandchildren in high school Honors English classes one day.

Barbra Streisand Holds A Mirror Up To The Globes’ Self-Congratulation: “Thank you! That’s so sweet!” said the winner of the 1984 Best Director award of “Yentl” as she took the stage, instantly sweeping the audience to their feet. “I’m not gonna sing,” she added sternly, as the applause continued. Then, she said this:

So, backstage I heard they said something about how I was the only woman — did I hear right? The only woman to get the best director award. And you know that was 1984? That was 34 years ago? Folks…time’s up! We need more women directors, and more women to be nominated for best director. There are so many films out there that are so good, directed by women. I’m so proud to stand in the room with people who speak out against gender inequality, sexual harassment, and the pettiness that has poisoned politics. 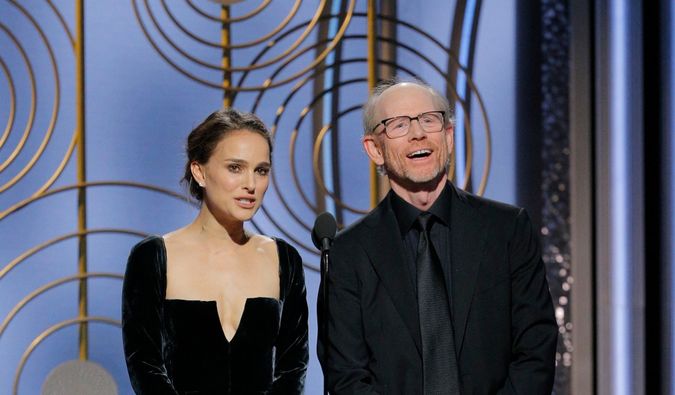 Natalie Portman: Oprah Winfrey may have given an incredible speech accepting her lifetime achievement award, but Natalie Portman had the line of the night when presenting Best Director: “Here are the all-male nominees.”

Here Are The Best Jewish Moments From The 2018 Golden Globes