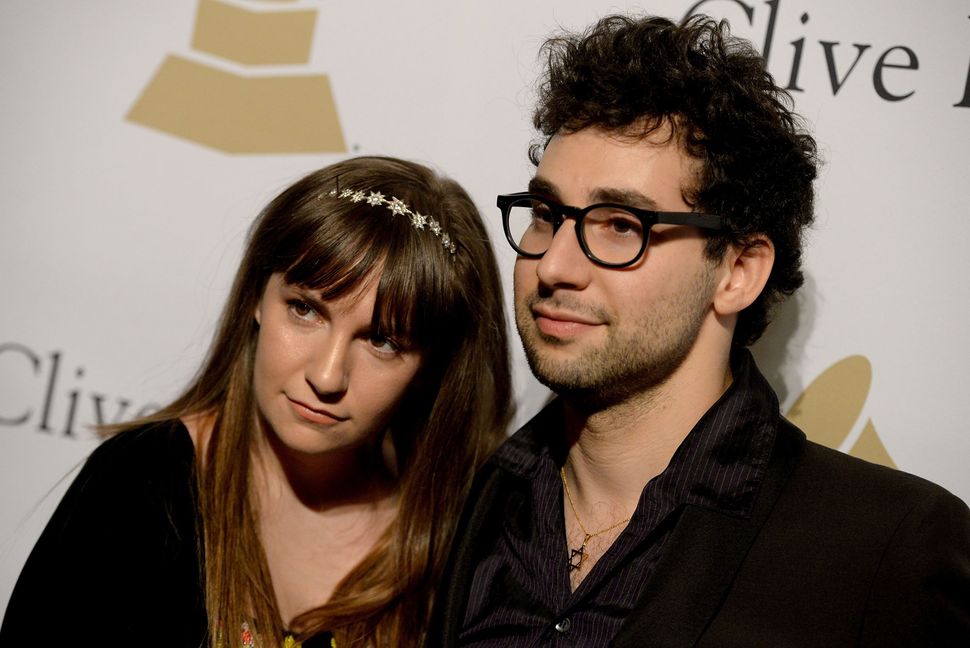 Dunham and Antonoff, on a good hair day for both Image by Getty Images

Here at the Schmooze, we’re not afraid to get extremely real. Commercial Israeli chocolate is disgusting. Howard Stern is a national disgrace. The premise that Jews are uniquely bad at sports is baseless. (All these are stories we’ve received hate mail for writing about.)

But I put off writing about actress and “Girls” creator Lena Dunham’s breakup with musician Jack Antonoff because hell hath no boring-but-endless fury like the general public asked to express sympathy for Lena Dunham. Now, as the end of the shloshim for the misbegotten Dunham-Antonoff union nears, I mourn publicly what was and what will no longer be.

Allow me space to grieve, internet!

Here’s how I justify it: Dunham appears to me to be caught in the crosshairs of two extremely strong-willed groups of people: Those who begrudge the success of women and fat people, and those who feel guilty about being white. This is an extremely similar Venn Diagram to people who do not like Hillary Clinton, though you can replace “fat people” with “especially, older women.”

I know, I know you have a really interesting take on Lena Dunham. Only you fully comprehend her evil machinations! But regardless of your amazing opinion (that would absolutely destroy mine I am sure), Lena Dunham and Jack Antonoff broke up, and it was sad!

Dunham and Antonoff officially ended their relationship on January 8 after dating for over five years. The couple moved in together early on, were seen together constantly, and referenced each other publicly and in their work. Their breakup means that there’s less love, and more annoying single people wandering the world.

Why is that sad?

My @ahsfx accent may have disappointed some, but I do believe I captured the distinctive emotion of 2017 right here. Also aren’t crying and laughing exactly the same!? Who’s with me!?

It’s sad because Lena Dunham is so vociferously disliked by many people and it was nice to think she had someone in her corner.

It’s sad because Lena Dunham and Jack Antonoff are both really, really talented, and also really, really annoying, so it felt like they were the only people who could stand each other.

It’s sad because the relationship seemed to bring both of them a lot of joy.

I did this with my mouth dead serious

Where else are Dunham and Antonoff going to find partners who want to participate in these kinds of acts of inherited Jewish trauma??

It’s sad because possibly they are both sharing a dark secret about their adopted-and-then-let-go dog Lamby, and now maybe each of them are afraid that they will be framed by the other for What Happened To Lamby.

It’s sad because they had made it through My-Jewish-Boyfriend-Is-Like-A-Dog New Yorker-Gate, in which Dunham was accused of anti-semitism for comparing Jewish men to dogs in writing(two separate dog-related scandals in one couple! That used to mean something!) and now that’s all for naught.

It’s sad because (this is guess-work) Lena made room for Jack as she became increasingly famous but now that Jack is having similar levels of success (he produced both Taylor Swift’s and Lorde’s most recent albums) their relationship didn’t work out, which I feel like is his fault. But that, I freely admit, is my projection of sadness.

Did I mention that it’s sad? I find it sad.

I request that you allow Lena, Jack, and me time to grieve.