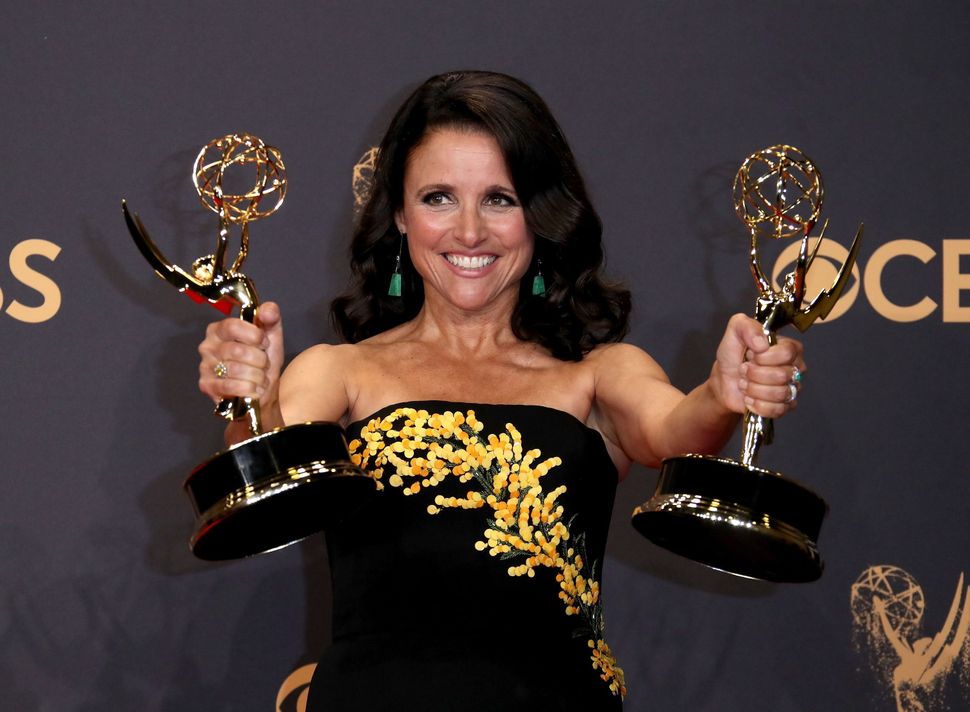 Julia Louis-Dreyfus, the once and future duchess of Jewish diaspora culture, was seen out today for the first time since finishing her chemotherapy treatment for breast cancer. The actress was diagnosed in September, and spoke publicly and poignantly about the prevalence of breast cancer diagnoses — using it as an opportunity to highlight the need for affordable, quality insurance.

Louis-Dreyfus’ diagnosis came just days after she won her 6th consecutive Emmy for Best Actress In A Comedy for her role in “Veep;” she added two more SAG awards for “Veep” to her collection while she was convalescing, making her the most decorated performer in the award show’s history, with nine awards in total.

Just when you thought… pic.twitter.com/SbtYChwiEj

The beloved Louis-Dreyfus, 56, has been missed by her fans and her “Veep” co-stars, who spoke about her at the SAG Awards, as she was not able to be present. Timothy Simons, the satirical show’s Jonah Ryan, reports that Louis-Dreyfus has been “incredibly strong” throughout her treatment, and Tony Hale (Gary, or Buster Bluth, according to preference,) adds, “We miss her greatly. We wish she were here. Big time.”

But no one has supported the star more than her sons, 20-year-old Charlie, and 25-year-old Henry, who created a supportive video for their mom’s last day of chemotherapy that is, frankly, a work of art. The clip, which Louis-Dreyfus proudly posted to Instagram earlier in the month, is below. If you have any connection to either of Louis-Dreyfus’ children, particularly the one who is a legal drinker, please let him there is a Forward writer with a dowry of 250 articles about Scarlett Johansson who is more than available for marriage.

My beauty boys @henryhallmusic @charlie_hall made this for me today, my last day of chemotherapy. Pretty swell, right? Ain’t they sweet?