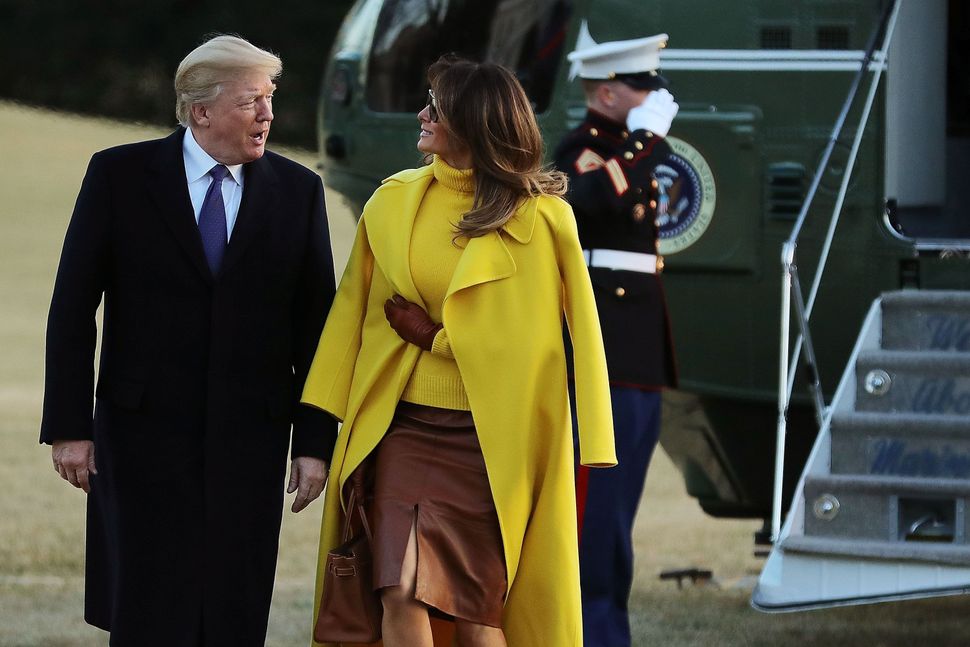 Trump and Trump with diamonds on the souls of their shoes. Image by Getty Images

Listen — did I become a Jewish pop culture writer so I could report on an old Jewish diamond executive who is publicizing the extravagant cost of his diamonds and the fact that he doesn’t give discounts?

But the obligation to tell the truth in spite of an ingrained desire to avoid all Jewish stereotypes is a heavy one.

So I will just quickly say that despite Donald Trump’s claims in a 2005 New York Times article headlined, “At Celebrity Nuptials to Die for, Vendors Give Themselves Away” the jeweler whose company sold the now President his current wife’s engagement ring claimed on Friday that he did not, in fact, give himself away to Trump.

Mrs. Trump’s 15-carat diamond engagement ring was purchased at Graff Diamonds at a retail price of $1.5 million, though Trump told the Times that the ring was sold for “half the price.” The article quotes Trump saying, “Only a fool would say, ‘No thank you, I want to pay a million dollars more for a diamond,’” conjuring startling images of Vizzini from “The Princess Bride” reasoning over iocane powder.

A close-up of Trump’s engagement ring:

Trump said he got a $1 million discount on Melania’s engagement ring. He lied https://t.co/6vEuizLGcY pic.twitter.com/F6jyyKkWQ6

Forbes broke the story on Thursday that Laurence Graff, chairman of Graff Diamonds, told the publication that his company did “no favors” for Trump when he came ring shopping. Nicholas Paine, CEO of Graff Diamonds, also confirmed that, “We don’t sell items for publicity value.” A third source who was unnamed told Forbes, “He paid for [the ring] in full, and he paid immediately.”

So, the truth will out, and the truth has. Justice has come for diamond company-owning billionaires and former supermodels living in the White House, and its mighty stream will surely trickle down upon us all.