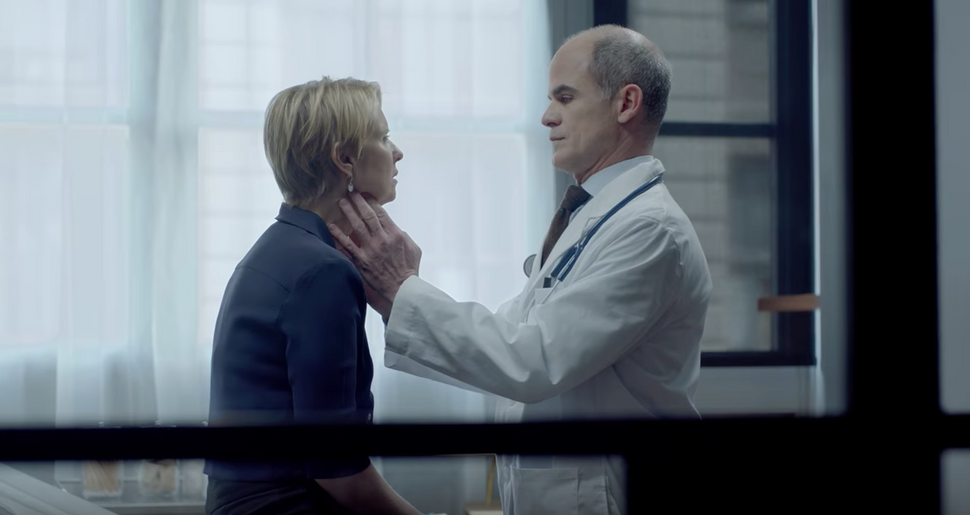 A shot from Schwimmer and Avin’s series, starring Cynthia Nixon and Michael Kelly. Image by Screenshot/Youtube

An unlikely duo believes that Hollywood lighting can illuminate the gray areas in sexual misconduct.

David Schwimmer, the actor best known for his work as Ross on the TV show “Friends,” and Israeli director Sigal Avin have teamed up for a series of six short videos depicting scenes of sexual harassment. The glossy, star-studded shorts show a bartender harassing his female coworker, a doctor inappropriately touching his female patient, a model enduring inappropriate treatment by a male photographer, and a legal professional, stylist, and journalist experiencing harassment at the hands of male superiors. Each video claims to “based on a real incident” and is written and directed by Avin, with Schwimmer as executive producer. The words “#ThatsHarassment” appears on the screen at the end of each video — there is no gray area here, they suggest. Sexual language and touch, especially in the workplace and in situations where two people have an unequal power dynamic, are harassment, period. These so-called “gray areas,” Schwimmer and Avin want viewers to know, are as black and white as a classic film.

The New York Times writes that Avin’s film series, first created in Israel and then remade for American audiences, were released last April, long before the slew of allegations against Harvey Weinstein and the genesis of the #MeToo movement. In keeping with the times, they’re being run on major networks Fox, Showtime, CBS, Hulu and Amazon. They are making the rounds online, and New Yorkers may spot them in taxi cabs. One short, starring Cynthia Nixon and Michael Kelly, is at half a million views and gaining.

The videos, which are all available on the “ThatsHarassment” Facebook page in case you don’t happen to be glued to Showtime at just the right moment, are mesmerizing. Realized on the screen, scenes of harassment carried out by perpetrators who know exactly how to leave their victims doubting their own experiences should stir the memories of those who either haven’t experienced harassment or have dismissed it. And the realistically scripted clips may help jar viewers who read reports like the ones about Matt Lauer and Louie CK and told themselves “that could never really happen.”

But grabbing hold of the public’s attention and conscience by turning life into art and art into glamour has a cost every single time. In the pore-less skin of Emmy Rossum’s fictitious victim and the graceful stealth of Schwimmer’s attacker, Avin and Schwimmer’s audiences may see harassment, but they might not see themselves.