The Best Dressed Jewish Celebrities At The Met Gala 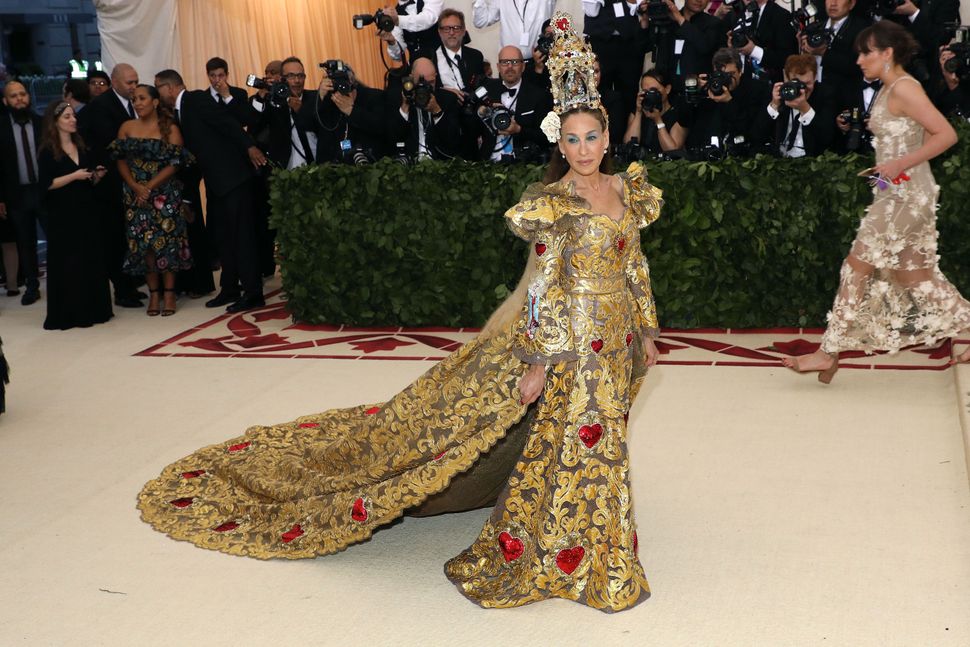 Unlike most red carpets, the Met Gala is a themed event, honoring the Costume Institute’s major spring fashion exhibition. As such, it’s like a costume ball, where the fashion is judged not just by subjective ideas of what dress looks best, but by how well a celebrity hewed to the theme. This year, with a fashion exhibition titled, “Heavenly Bodies,” showcasing the fashion inspired by the rich visual language of the Catholic Church, the theme was very religious in nature. But given Catholicism’s complicated history with the Jews, it’s a theme that was difficult to imagine nice Jewish girls (or nice Jewish designers) really embracing. But embrace they did, and the resulting images feel blasphemous in the most heavenly way. 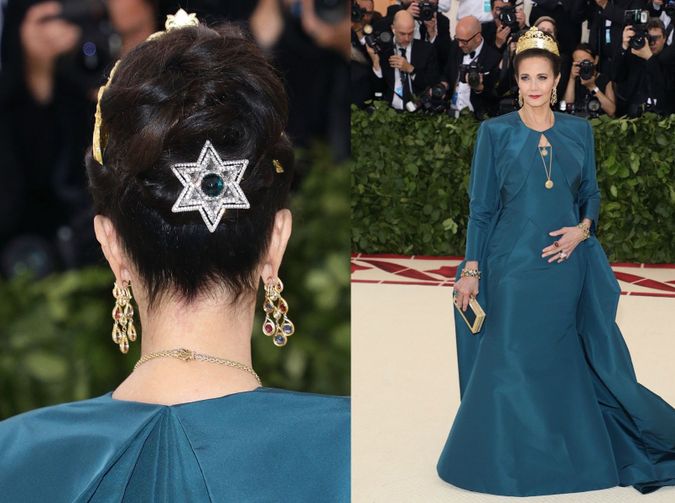 Lynda Carter is not Jewish, but her husband Robert Altman is, and so is the designer behind her dress, Zac Posen. Wearing a blue duchesse satin gown fit for a queen (she even wore a crown), Lynda Carter took a radically different, even subversive approach, to the Catholic theme: repping the people that was, historically at least, most persecuted by the Catholic Church, the Jewish people. Instead of adorning herself in a cross, she wore a diamond Magen David barrette in her hair and two (!) Magen David pendant necklaces. So while not exactly on theme, it’s almost as if she were taking a subtle dig at the Catholic Church, at the Church’s past bloody attempts for religious supremacy (i.e. the Inquisition and the Crusades). Sure, the Church has since reformed its image, and its current pope is pretty cool, but Lynda Carter is the OG Wonder Woman, and would never let a foe forget their sins. 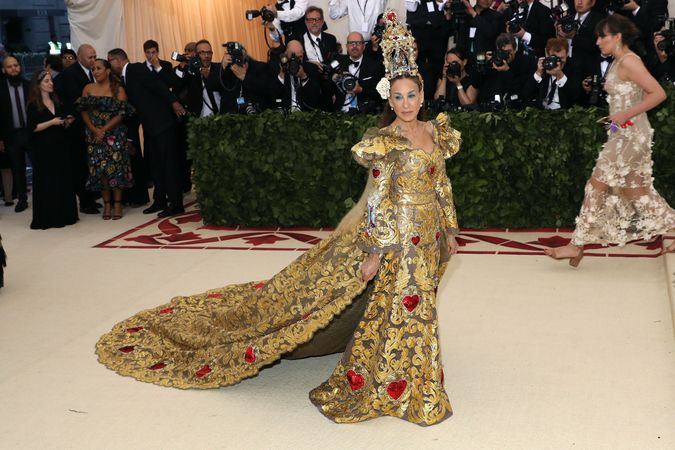 Sarah Jessica Parker is just your typical nice, Jewish girl. But she’s also supremely dedicated to fashion, even if it means she has to anoint herself in an ornate headpiece containing a full-on Nativity scene, as if her head was the front yard of a suburban church during Christmas. Her richly ornate Dolce and Gabbana metallic gown, with gold baroque embroidery, made her look like a literal Queen of Hearts. And her long, extension-filled hair flowed down her back, giving off a Renaissance vibe. Which is an unsurprising approach took by many celebrities, given how much the Italian Renaissance affected the aesthetics of the vestments of the papacy and the Catholic Church. 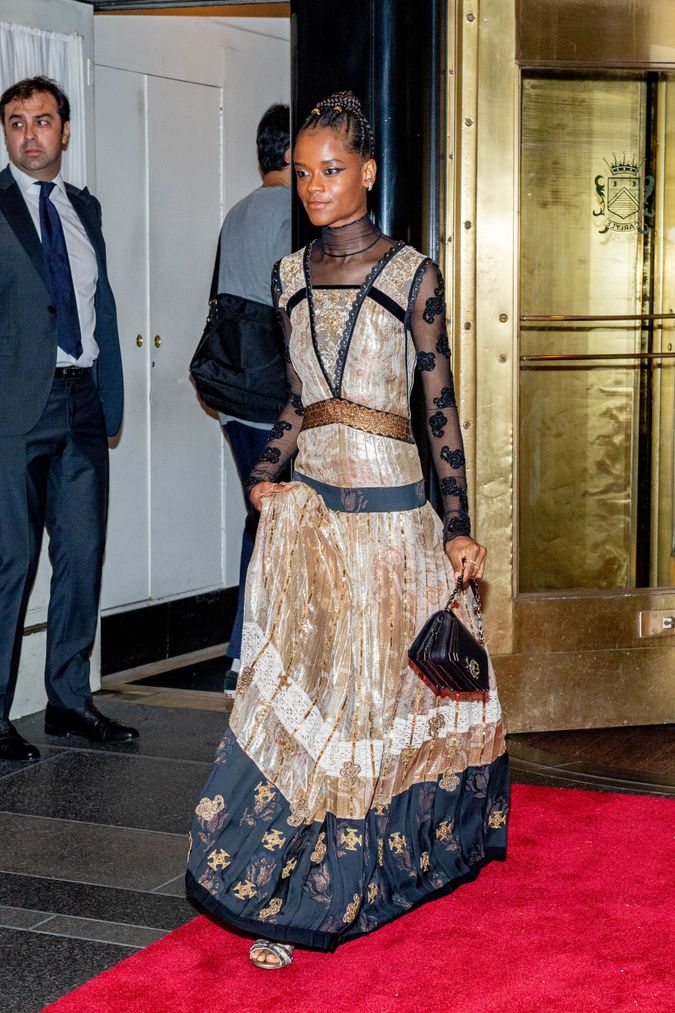 Letitia, who recently hit the big time for her role in Marvel’s Black Panther movie, is not Jewish, but she wore a custom Coach dress — a brand that is historically Jewish. Her black and gold drop-waist gown was a “rebellious” choice, as it was inspired by the vestments of Ethiopian Orthodox Christianity — you know, one of the many denominations of Christianity that is very NOT Catholic. But the dress was beautiful, and modest in a different kind of Orthodox way: the dress was made with sheer embroidered black sleeves and high neck, as if she layered her dress with a “shell,” a favorite of many Orthodox Jewish women. 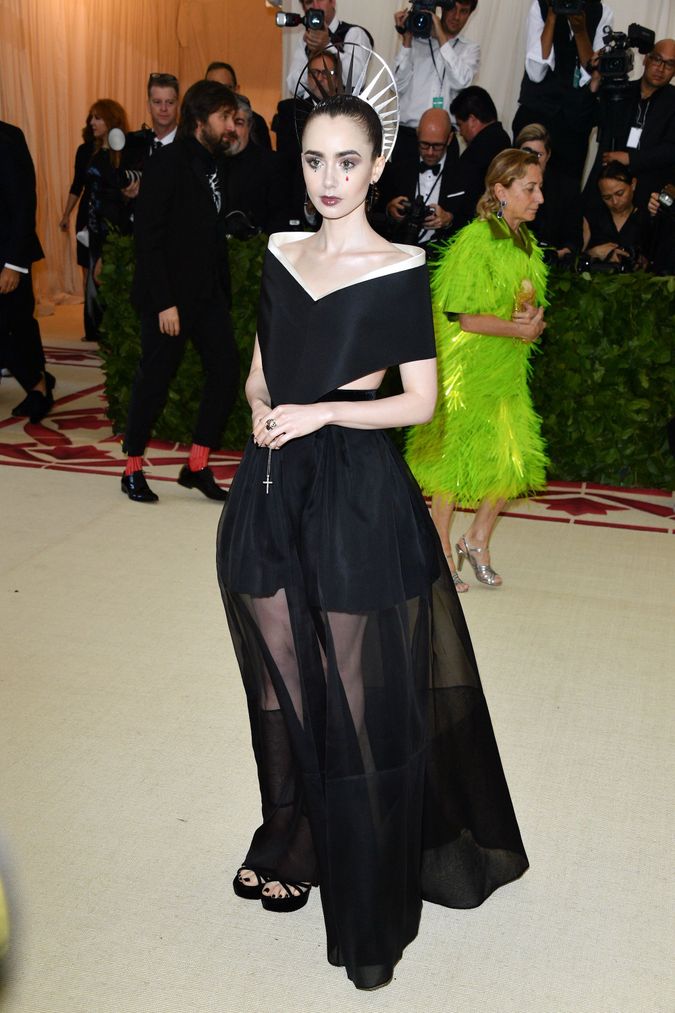 Lily Collins took an avant grade approach to the theme, wearing a black structured Givenchy gown to give a “chic nun” kind of vibe as she held a small cross necklace in her hands. She topped it off with a halo headpiece that looked like the rays of the rising sun. Combined with subdued, even ghoulish makeup, the dress’s sheer skirt and cut-outs made the look subversive, perhaps even a bit devilish. 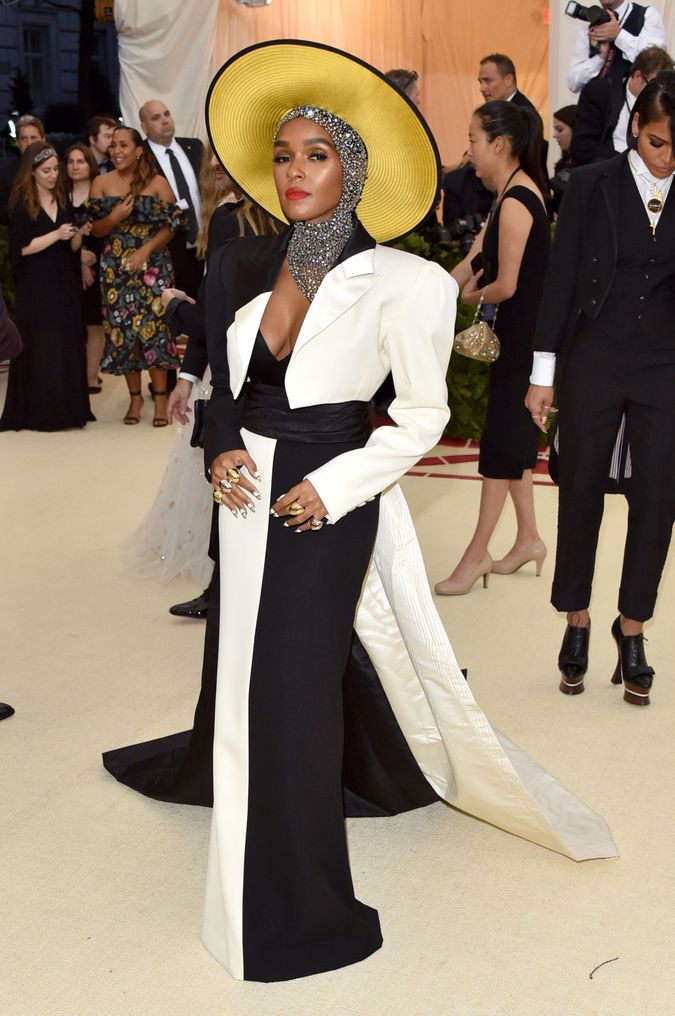 Image by John Shearer/Getty Images for The Hollywood Reporter

Janelle Monae is one of those celebrities who always brings it when it comes to the red carpet. And this year’s Met Gala was no exception, except she took a lot of liberties with the interpretation of the theme. Wearing a bifurcated black and white gown topped with a cropped jacket that had a train cascading down her back, her dress was certainly regal, but it wasn’t exactly “Catholic.” Instead, Monae relied on a chainmail hood to keep her on theme. The hood could have referenced the habit worn by nuns, but instead it looked like a part of a medieval knight’s wardrobe. Which, considering how the crusades factored into a medieval knight’s life, is actually a pretty good reference. But while the avant grade approach is appreciated, the look lacked cohesiveness and a distinctive narrative.

Rating: 8/10 (points off for a confused approach to the theme) 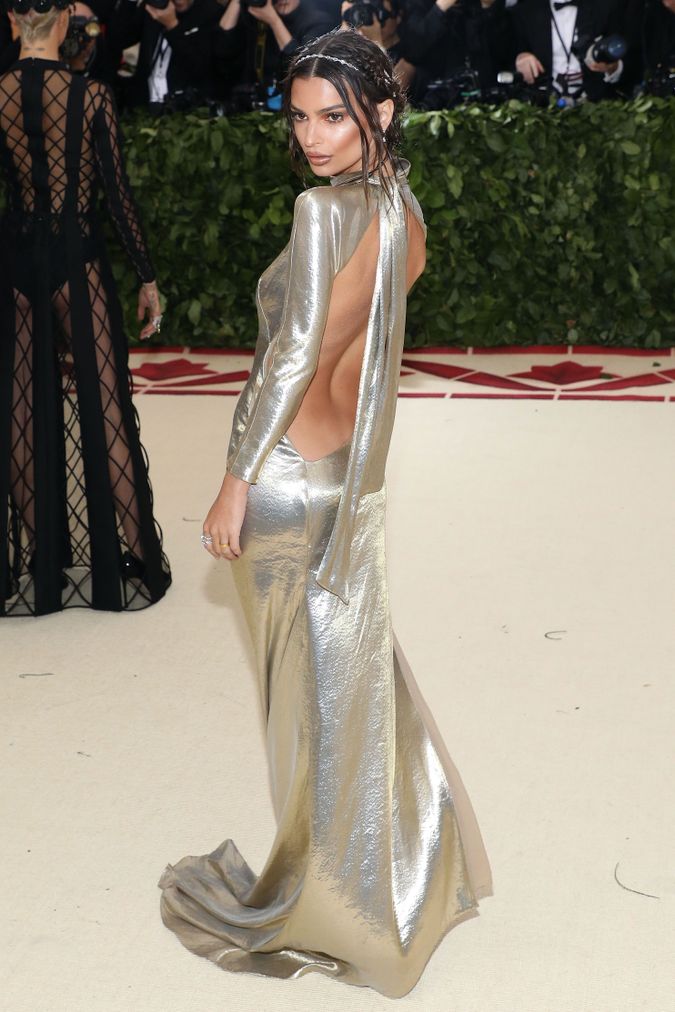 As EmRata explained to Vogue, “we were going for a heavenly body, molten statue vibe. The theme is dripping, [so we] came through dripping.” Which is, shall we say, a very liberal interpretation of the theme. It’s almost as if Ratajowski imagined herself going to a Hollywood themed party, where she could become the physical embodiment of an Academy Award. But this wasn’t the Oscars, this was the Met Gala where Hollywood was very much not being celebrated. At least she crowned herself in a simple headband, which I guess kind of looks like a halo, so we’ll throw her a couple of points for that. 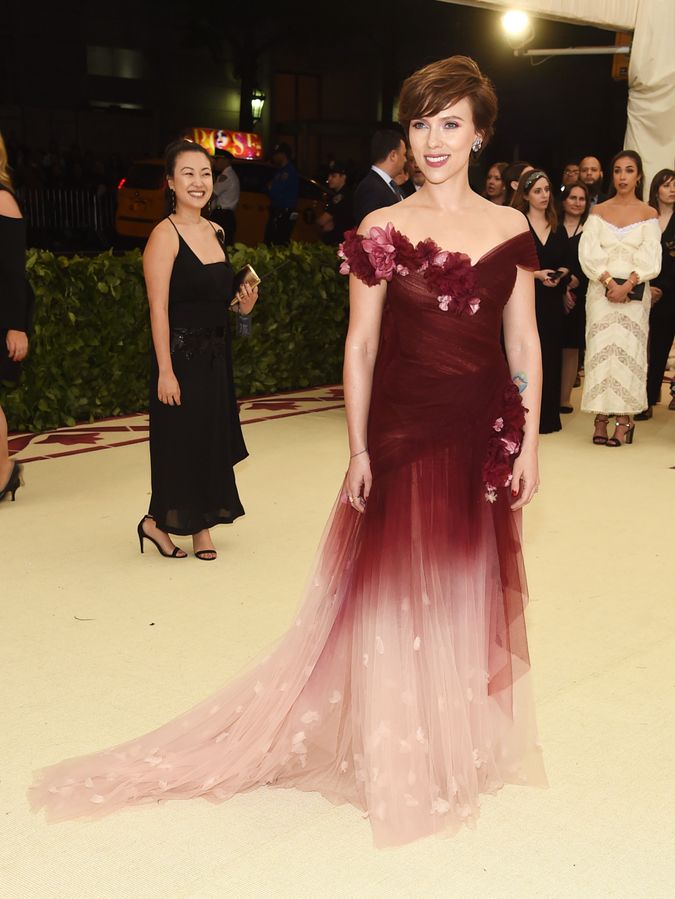 Speaking of people who eschewed the theme, Scarlett Johansson was one of the biggest perpetrators of this specific fashion crime. Wearing a maroon and dusty pink frothy confection of a Marchesa gown, Johansson looked like she was attending a floral-themed party. But a Catholic-themed party? No, absolutely not. And so in the midst of ecclesiastical and monastic inspired looks, Johansson looked out-of-place. And then there was her choice of designer — Marchesa. Which, considering who Georgina Chapman’s ex is (cough Harvey Weinstein cough), seemed like she was trying to send a message. But being that we’re still scratching our heads over why she was dressed so NOT on theme, is hard to discern at the moment.

The Best Dressed Jewish Celebrities At The Met Gala