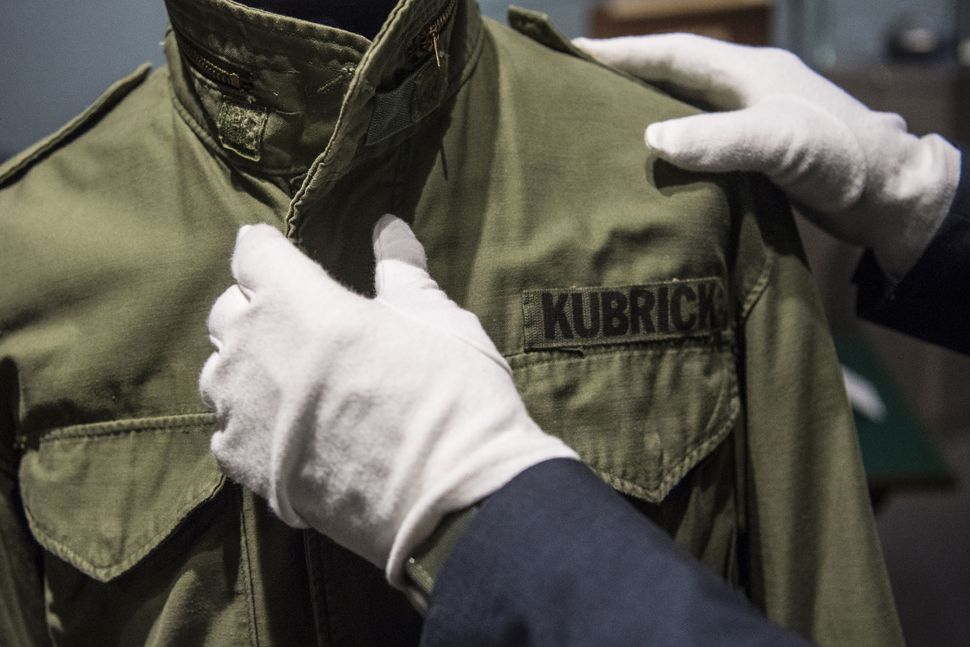 A jacket of Stanley Kubrick’s at auction in 2018. Image by MARCO BERTORELLO/Getty Images

In an egregious act of censorship that can only be described as Orwellian, the Cannes Film Festival banned selfies on its red carpet this year. Can someone check the Geneva Conventions? This can’t be legal.

Anyway, from Roman Polanski’s latest attempt to minimize his egregious sexual misconduct, to Mila Kunis’s upcoming spy flick, to a rap battle between Seth Rogen and Joseph Gordon-Levitt, read on for this week’s movie news.

Leon Vitali, a London-based television actor, caught a major break when Stanley Kubrick cast him as Lord Bullington in “Barry Lyndon” (1975). On-set, Vitali took an interest in film production, and Kubrick took him under his wing. Thus began a two-decade professional relationship, which Vitali discusses at length in the documentary “Filmworker” (2017). Vitali spoke to the Forward’s Daniel Witkin about his relationship to Kubrick, and about the Kubrick’s “desire to make a film about the Holocaust.”

Roman Polanski, who pled guilty to “unlawful sexual intercourse” with a 13 year old girl in 1977, told a Polish publication that “the #MeToo movement is based on “collective hysteria” and that the phenomenon smacks of “total hypocrisy,” according to the Forward’s Jenny Singer. Singer notes that Polanski also “compared assault victims’ behaviors to the faux-mourning that North Koreans perform after the deaths of their leaders.” Yikes.

3) A new trailer dropped for Mila Kunis and Kate McKinnon’s buddy spy comedy, “The Spy Who Dumped Me”

Jenny Singer wrote about the new trailer for “The Spy Who Dumped Me,” which, she writes, might be “the most important move of summer 2018.” The premise, according to Singer, “is that Mila Kunis was dumped by a man who the CIA is tracking.” Hijinks, one can assume, ensue. As Singer also points out, the film is directed by a Jewish woman, Susanna Fogel, and “promises fabulous representation of women, Jews, and queer people.”

Elsewhere on the web, The New York Times’ Melena Ryzik attended a screening of “RBG,” a new documentary about legendary Supreme Court Justice and workout fanatic Ruth Bader Ginsburg. Ryzik writes, “Justice Ginsburg is an unlikely celebrity but then again, we live in an age full of those.” What’s more, at Ryzik notes, RBG is making “careful and inspired” use of her platform “for her own savvy ends.”