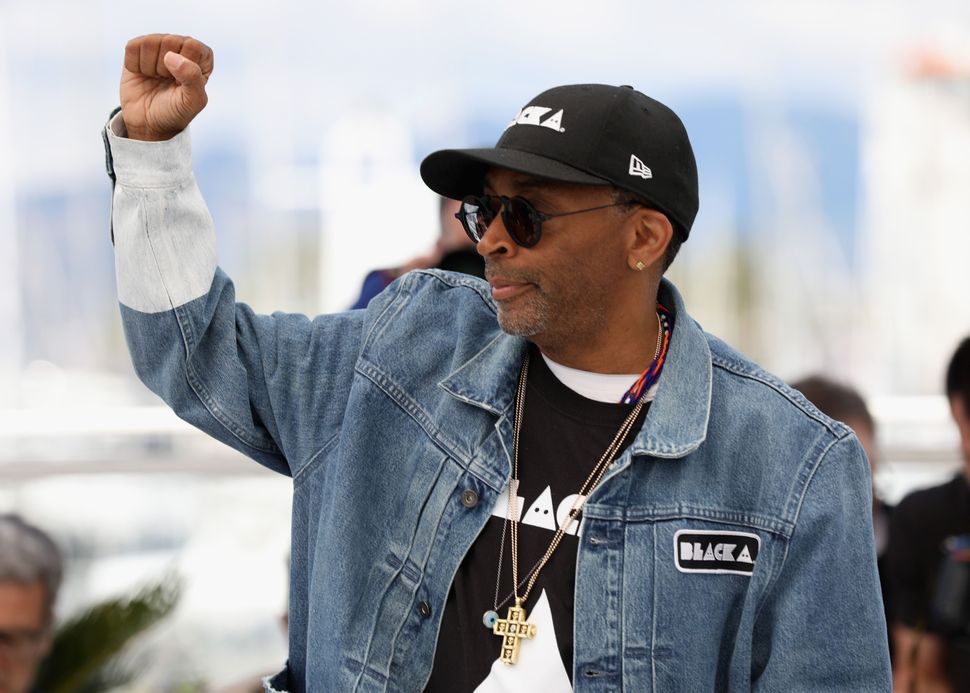 Assembling this week’s movie news, I’d be remiss if I didn’t mention the upcoming Royal Wedding. True fanatics might pay homage to “The Royal Wedding,” the 1951 musical comedy starring Fred Astaire as an American dancer who visits London during Queen Elizabeth and Prince Philip’s nuptials.

However, it’s 2018, so I’ll instead point your attention to “Harry and Meghan: A Royal Romance,” a new Lifetime TV movie about, that’s right, Harry and Meghan’s royal romance. I haven’t seen the movie, but the Forward’s deputy culture editor, Talya Zax, says “it rocked (in a Lifetime way).” Plus, there’s a scene where Princess Diana’s spirit is reincarnated in a lion … so, there’s that.

Read on for this week’s movie news.

1) In Spike Lee and Jordan Peele’s “BlacKKKlansman,” black and Jewish police officers will fight the Klan together

A.J. Goldmann wrote about the upcoming Spike Lee and Jordan Peele film “BlacKKKlansman,” which premiered at Cannes on May 14. The film is based on the true story of Ron Stallworth, a black police officer who infiltrated the KKK in 1979. According to Goldmann, the screenplay — adapted from Stallworth’s memoir — “invents a Jewish sidekick for Ron” named Flip Zimmerman. Flip, who is played by the non-Jewish Adam Driver, “is a secular Jew who has never thought of himself as anything but white until contact with the Klan makes him confront his heritage,” Goldmann writes.

A.J. Goldmann sat down with Ruth Beckermann, who, he writes, has been “digging into the dark corners on her country’s history since ‘The Paper Bridge,’ which screened at the 1987 Berlin Film Festival.” Beckermann’s new film, “The Waldheim Waltz,” investigates the hidden Nazi past of Kurt Waldheim, the former Austrian president and UN secretary general. Composed entirely of footage from 1986, in the days leading up to that year’s Austrian presidential election, Beckerman’s film is “seamlessly constructed and tautly edited in the manner of a gripping courtroom drama,” according to Goldmann.

3) Ruchie Freier, the world’s only Hasidic woman judge and subject of a new documentary, spoke to the Forward

Ruchie Freier is the world’s first and only Hasidic woman judge, and the subject of an upcoming documentary called “93Queen.” She spoke to Simi Horwitz for the Forward, discussing, as she put it, her “David and Goliath”-esque race to become a civil court judge in Brooklyn’s 5th district. She explains that, as a Hasidic woman, her campaign — which was already an uphill battle against more well-known candidates — was doubly difficult: “All the flyers in my neighborhood were in Yiddish, and because a photograph of a woman in a public place would be offensive to many members of my community, my flyers did not feature my picture,” she told Horowitz.

In 1959, Billy Wilder’s flick “Some Like it Hot,” which starred Marilyn Monroe, Jack Lemon and Tony Curtis, debuted to rave reviews and huge box office numbers. It remains an all-time classic. Since then, the film has been adapted for the stage twice, in 1972’s poorly-received Broadway show “Sugar,” and in a later rework of that adaptation, confusingly also titled “Some Like it Hot.” Now, the film will return to Broadway in an all-new production spearheaded by producers Craig Nadan and Neil Meron.

It’s unclear if 2018 is the year the American empire collapses, or the year the Korean peninsula reunifies — but it will certainly be “The Year Two A-List Hollywood Stars Fought To Portray A Gay, Jewish Musical Theater Composer,” according to the Forward’s Jenny Singer. That composer, Leonard Bernstein, will reportedly be the subject of two upcoming films: “The American,” starring Jake Gyllenhaal, and “Bernstein,” starring Bradley Cooper.