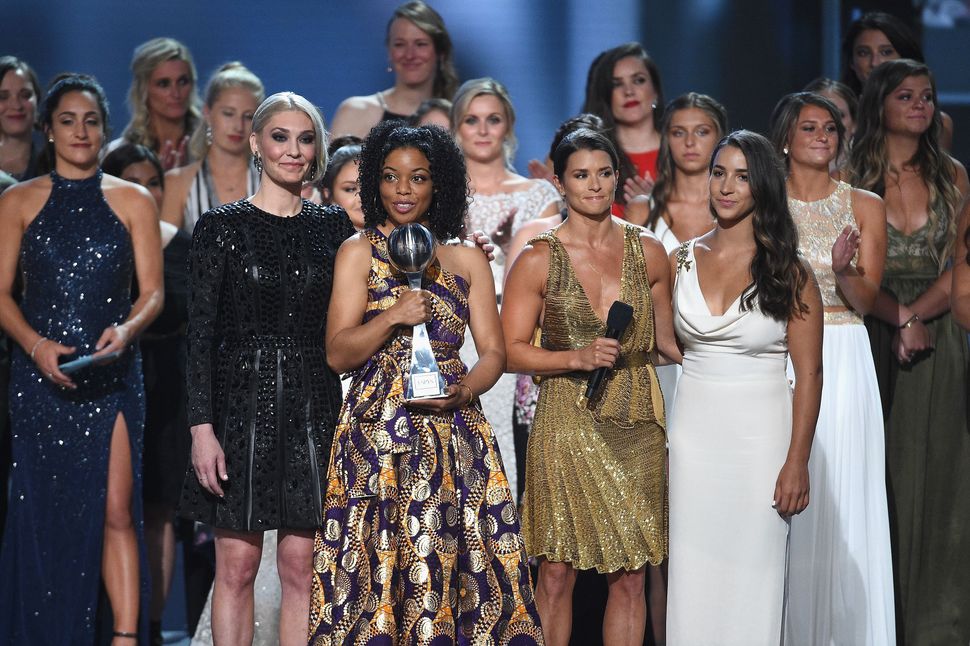 140 women in evening gowns and jewels file onto the stage at the ESPYs, the athletic awards held by ESPN on Wednesday night. The women fall into lines, many clutching each others’ hands — rows and rows of star athletes who have gone on to become academics, doctors, mothers, lawyers, and Olympians. They overflow onto two smaller stages. The 140 women spread over three stages are accepting the Arthur Ashe Award for courage. Each athlete endured sexual abused during their careers by quack sports doctor Larry Nassar, the serial child molester who pled guilty to sexual assault and has now been sentenced to 40 to 175 years in prison. All together they do not even represent the sum total of Nassar’s victims.

As the biggest names in sports and entertainment rise to their feet, Sarah Klein begins to speak. “The abuse of Larry Nassar began 30 years ago with me,” she tells the listening crowd. “For 30 years, people at the United States Olympic Committee, USA Gymnastics, and Michigan State University all placed money and medals above the safety of child athletes. Thirty years, until the work of Detective Lieutenant Andrea Munford of the Michigan State Police Department and Andrea Povilaitis, the assistant attorney general who prosecuted the case, finally putting our abuser away for life.” Shocked out of their silence, the crowd honors Munford and Povilaitis. There is a silent, but clear group acknowledgement that the Nassar case was put away almost entirely by women.

“Telling our stories of abuse over and over and over again is not easy,” Klein continues. “We’re sacrificing privacy, we’re being judged and scrutinized, and it’s grueling and it’s painful, but it is time.” Klein, on the brink of tears as she delivered her words, concluded, “If one more victim of sexual abuse feels less alone tonight, then our suffering has meaning.”

Next to Klein, former Michigan State University softball player Tiffany Thomas Lopez begins with a slight smile. “Sexual abuse claims victims in every race, showing no discrimination,” she tells the crowd. “I’m here to tell you, you cannot silence the strong forever.”

Aly Raisman, twice the captain of the US gymnastics women’s Olympic team and six times an Olympic medalist, speaks last. Her sense of self is so clear, it’s chilling. “1997, 1998, 1999, 2000, 2004, 2011, 2013, 2014, 2015, 2016,” she says, staring down the camera. “These were the years we spoke up about Larry Nassar’s abuse.” The child victims, Raisman says, were told: “You are wrong. You misunderstood. He’s a doctor.” The intention, she says, was “to silence us in favor of money, medals, and reputation.” Graciously, she takes time to honor Judge Rosemarie Aquilina, the judge who, at Nassar’s sentencing, allowed any of his victims to address him personally, from the court. Raisman turns back to the audience, to us. “Perhaps the greatest tragedy of this nightmare is that it could have been avoided,” she says stonily. “Predators thrive in silence.” She looks out over the crowd. “We may suffer alone. But we survive together.”

“To all the survivors out there, don’t let anyone rewrite your story. Your truth does matter. You matter. And you are not alone.”

Tonight, Aly Raisman and her sister survivors brought the #ESPYS audience to their feet. pic.twitter.com/0sVTI0wLUH