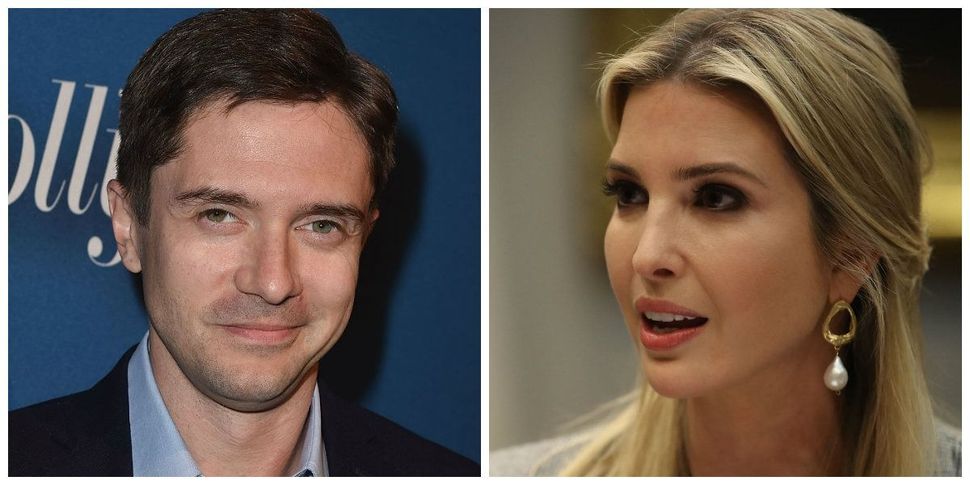 Ivanka Trump and Topher Grace both have impressive resumes. Their LinkedIns, if they had them, would be magnificent.

Trump has modeled. Grace is an actor. Trump had a business; yes, it failed, but now she has more time for her work in the White House. Grace made so much money starring on “That 70’s Show” that he decided to work exclusively with “auteurs,” not big studios, leading him to star as David Duke in Spike Lee’s highly anticipated upcoming movie “BlacKkKlansman.”

And in 2006, Ivanka Trump and Topher Grace were a couple.

That’s what Spike Lee figured. “BlacKkKlansman,” which will be released on August 10, follows the true story of black police detective Ron Stallworth who in the 1970s, using a white, Jewish colleague as a body double, infiltrated the KKK. The duo’s composite character, under Stallworth’s name, eventually became president of their local Colorado Springs chapter. Grace, 40 but still ravishing in that World War II-era kind of way, says the story of him dating the first daughter is less dramatic. “Certainly it wasn’t a political statement,” he explained to The Daily Beast. He didn’t meet his girlfriend’s father, he says. “This was a decade ago. I met her here in New York and we went on a couple of dates.”

The few details we have of the Grace-Trump (Grump) union include the couple clubbing together for Trump’s 25th birthday in Las Vegas at a party she hosted. Adam Levine and Chelsea Handler were also there, meaning the party was attended by basically every Jew who was a celebrity in 2006. (Grace doesn’t practice Judaism, but he had one Jewish grandparent.) Grace was the last person Trump dated before her now-husband, Jared Kushner.

She certainly has a type. Grace’s interviewer, Marlow Stern, pointed out that if (when) a movie is made about the current administration, Grace could easily be cast as Jared Kushner.

If God, the real auteur, is listening — please make this happen.