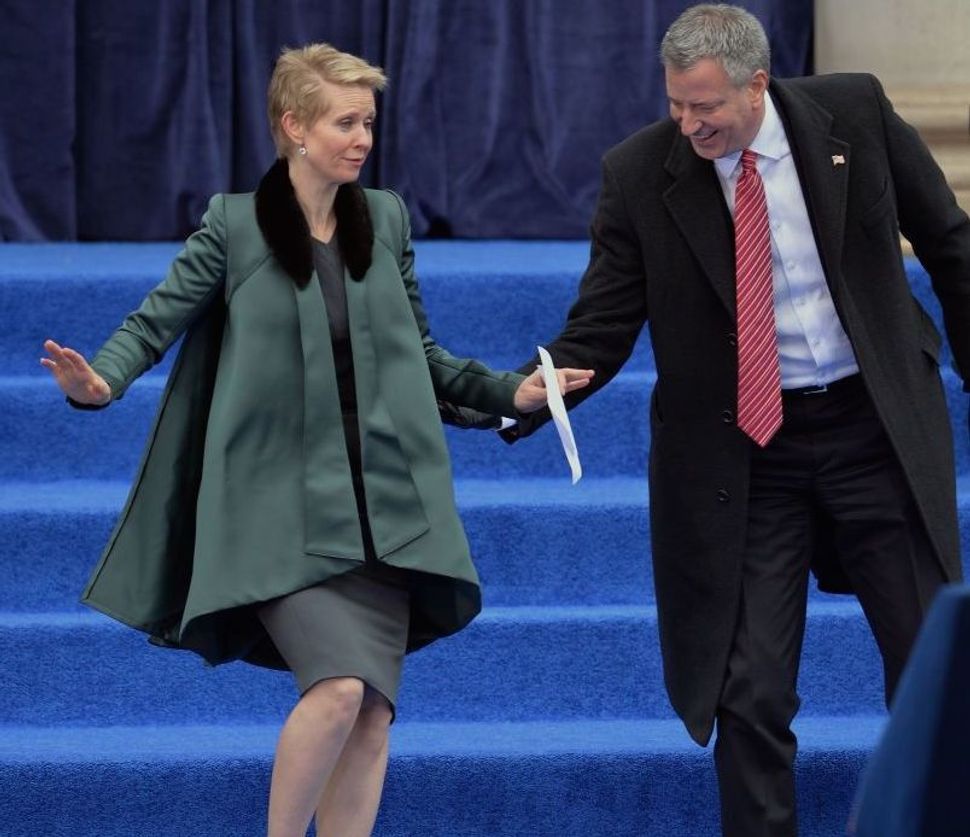 This is just like that time Carrie dated the candidate for city treasurer, except so much juicier.

The political ramifications: years of friendship, political support from Nixon, and occasional favors from de Blasio make the Mayor’s demurral to endorse Nixon’s campaign against incumbent Cuomo all the more fascinating.

The gossip ramifications: even bigger. And you know what? These Sex and the City references are played out. Here’s to Cynthia Nixon’s political life having a second act, unlike the Broadway show “Wit,” for which Nixon gained a Tony nomination for Best Actress in a Starring Role.

1.In 2014, On Public Theater honcho Oskar Eustis’ request, Nixon emailed de Blasio to appeal for him to curb the Uber-but-for-helicopters-like program that had taken to noisily disrupting The Public’s summertime Shakespeare in the Park performances. Eustis, via Nixon, implored de Blasio by name dropping our very own Charles Schumer. Bill D thanked her for the note and said, “That’s a new one on me — no idea why the helicopters would be over the park. We’ll check this out and get you an answer asap.”

Free public theater vs. a private concierge helicopter service? Almost makes you think those coastal elites and those liberal intellectuals aren’t necessarily one in the same! But then again, all that celebrity pull on the government. A curse on both their houses!

2.Sarah Jessica Parker, formidable Jewess that she is, parlayed her connections with Nixon to get in touch with a de Blasio aide to secure help for a friend whose West Village restaurant wasn’t receiving help from the city in response to a landlord issue. This is just so typically SJP! A kind impulse justly intended by the woman who truly seems to live to preserve luxury culture. It is what it is.

3.“I’m scared but i’ll do what is asked…yikes,” Nixon responded to a request from a de Blasio aide that she perform alongside Steve Buscemi at “The Inner Circle,” an annual satire of New York mayoral activities. That aide, Rebecca Katz, is now Nixon’s campaign advisor (you thought we wouldn’t find the Jewish angle?)

We’re a country that has a collectively inexhaustible interest in women’s emails, so this should be satisfying to many. Nixon loves theater, is friends with her former colleagues, and volunteered to perform at a benefit. Billy DB, where’s that endorsement at?