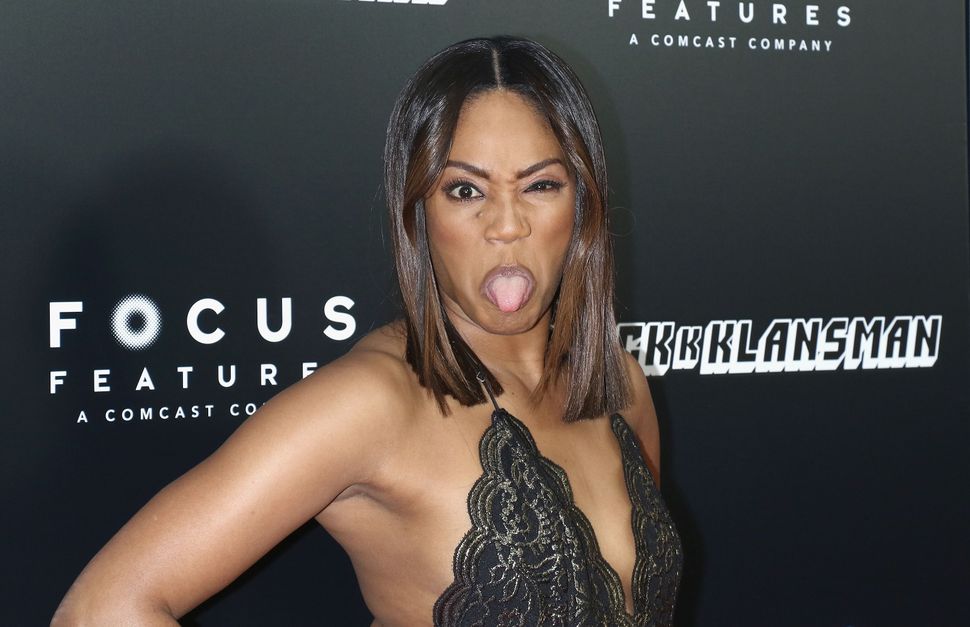 Tiffany Haddish, who Vogue recently named “Comedy’s New Queen”, continues to make us cackle. In an appearance on Jimmy Kimmel’s “Three Ridiculous Questions” she showed off her ability to turn just two minutes on screen into a memorable charm offensive. Her time spent with the late night host involved booze and— you guessed it— three obscene questions. The stylized interview opens up with Kimmel, as a bartender, refilling Haddish’s martini. She holds up her drink as if to say, ‘I’m drinking during daylight hours but IDGAF WHAT YOU THINK’, giving the camera a drunken expression.

“I mean it depends on the person. Some white guys, they take their shirt off and I’m like damn,” the 38-year-old comedian says. “They’ve got translucent nipples,” she adds. Definitely not the answer we were expecting, but now white guys all over must be checking out their nipples in the mirror.

When asked if she would thrive in space, she says “only if a man is there with me.” That’s not to say she thinks she needs a man; the star of the upcoming movie “Nobody’s Fool” is a strong all on her own. But practically speaking, the human race needs to reproduce to continue existing, she explains. Kimmel laughs at her candid humor and fires another arbitrary question her way. For Haddish, comedy had always been a distraction from the foster care system and a poverty-stricken upbringing.

“The only time I didn’t wanna cry is when I was laughing,” Haddish tells Vogue in the September issue. At 15-years-old she claimed her ticket into the world of comedy, when a social worker sent her to Los Angeles’ Laugh Factory to overcome behavioral issues. Through her 20’s, she worked odd jobs including Bar Mitzvah parties.

If there’s one thing to learn from Tiffany Haddish, it’s that nobody is an overnight success. And that if you wind up owning a robot butler, name it James.