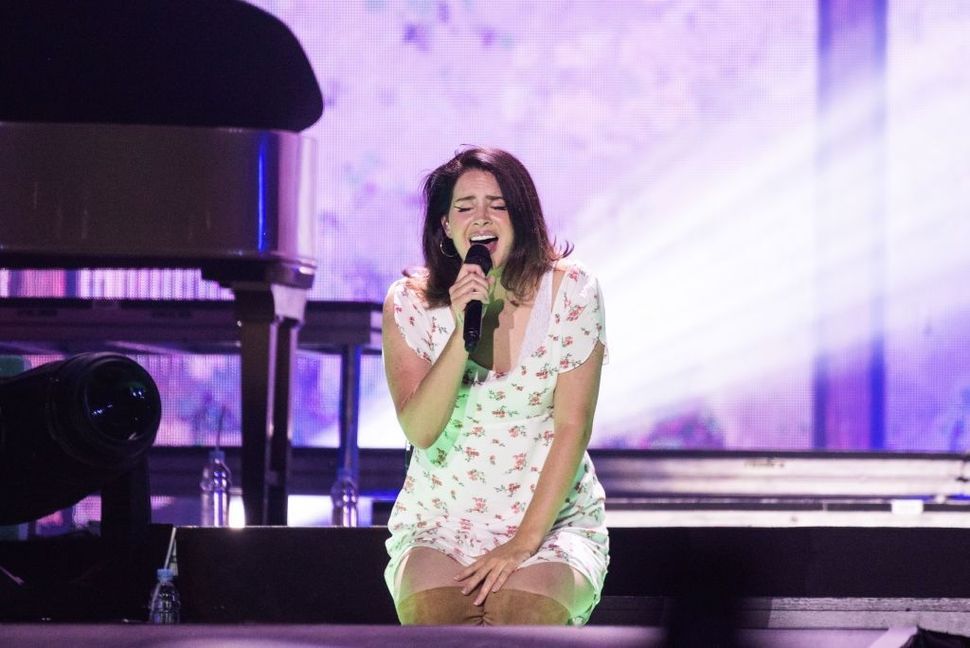 The 33-year-old performer recently found herself caught in the crosshairs that fix on all global musical acts at some point or another, when she received major criticism for agreeing to perform in Israel. It was announced on August 17 that Del Rey would headline the Upper Galilee’s Meteor Festival, a long-awaited return on a commitment, since the singer canceled an Israel concert in 2014 due to concerns about the war in Gaza.

Predictably, as was the case most recently with Del Rey’s musical peer Lorde, a group of fans came out en masse to criticize the artist for her choice to perform in Israel. Initially, Del Rey issued a statement explaining her decision to perform. And though it was clearly designed to appease, the note strayed from the typical winsome neutrality of such celebrity defenses. In it, Del Rey gently noted that her performance is “not a political statement or a commitment to the politics there,” and no more indicates her support of the Israeli government than a performance in California indicates her support of the American one. And predictably, she continued to field criticism and calls to boycott.

On Thursday, unlike many other artists who have canceled performances in Israel under similar duress, Del Rey publicly reaffirmed her decision to perform. In a statement she acknowledged the desire for her to show support for Palestinians as well as Israelis, and added that she will also be visiting the Palestinian territories during her trip. “I want peace for both Israel and Palestine,” she wrote.

You could read it as an act of equivocation by a popular figure hoping to stay popular, but it’s really a tiny bit radical. Del Rey had clearly thought deeply on the issue and did not bend on it despite massive criticism. She found a way to play in Israel without pretending that it’s an area that’s not in tremendous conflict. Her visit to see Palestinian towns and meet Palestinians is a choice to go on her own personal Encounter trip.

Her note, obviously calculated to heal a rift among her supporters, ended with a hint of defiance aimed at Roger Waters, the Pink Floyd member who is one of Israel’s most outspoken celebrity critics. Waters wrote Del Rey an open letter on social media charging her in the name of “Palestinian basic human rights” not to “abandon[sic] your Palestinian brothers and sisters to their fate in their hour of need.”

“Also Roger Waters,” Del Rey’s note concluded. “I read your statement about taking action even when you believe in neutrality, I totally understand what you’re saying, and this is my action.”

It’s easy to see Lana Del Rey as “just” a pop star — a doe-eyed, dolled-up product. But besides her great talent, she’s given, strangely, a masterclass in handling the intense crucible of left and right rage surrounding Israel. She showed that you can refuse to surrender your convictions while constantly reeducating. She took action.