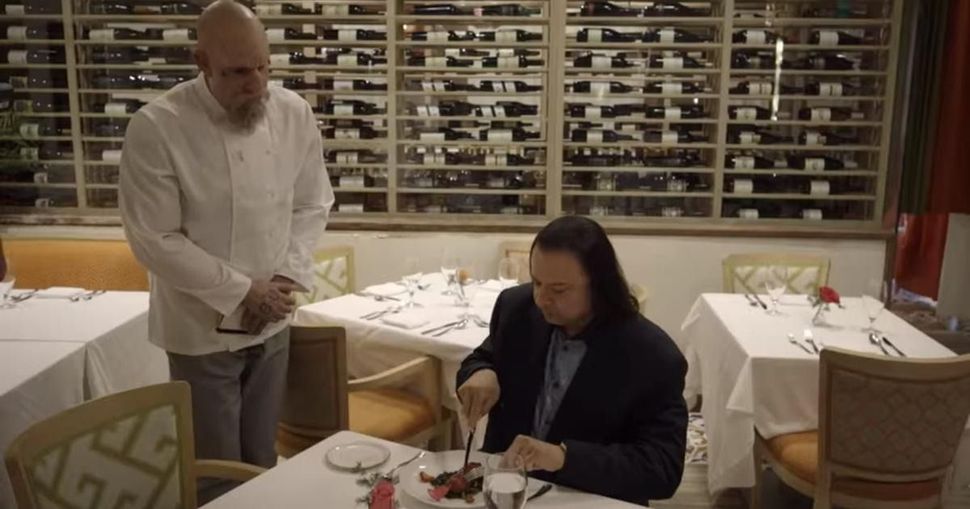 In some cultures, cannibalism is a way of life. From the Korowai, a group of Indonesian natives who still eat their fellow tribesmen, to the trend of gourmet cannibalism that once spread across China, the idea of consuming human flesh is something that inspires a strong reaction in most people.

And while the consumption of human flesh is off the table for most — that didn’t stop Sacha Baron Cohen from wading into the ethical debate on an episode of his new shock-comedy show, ‘Who Is America’. For food critic Bill Jilla, of dinnerreviews.com, a site that appears to be down (his LinkedIn is still active, however), eating a “filet of vegetarian-fed Chinese dissident with cauliflower puree” is simply what comes with the territory of being a trend-chasing restaurant reviewer. After being fed “veal, anally aged for eight days in a prophylactic,” Jilla appears to reluctantly poke at the human flesh before deciding that the man who donated his flesh is already dead, so why not have a bite?

Cohen’s character Rick Sherman is an ex-con who learned to appreciate the sizzling taste of human flesh while incarcerated. Now free from prison, Sherman is on a televised mission to feed the world fussy food inspired by his prison experiences, a perfect melding of high and low culture.

The taste of Mr. Lao, the man who presumably sacrificed his body to Mr. Jilla’s palette, seems to agree with Jilla. He records a message thanking the Lao family for the meat that melted in his mouth.

The clip appears to have been scrubbed from YouTube, but the horrifying memory of Jillia being told it “would be a great honor for the family to know someone in the West is enjoying their son” is seared into the public’s memory forevermore.