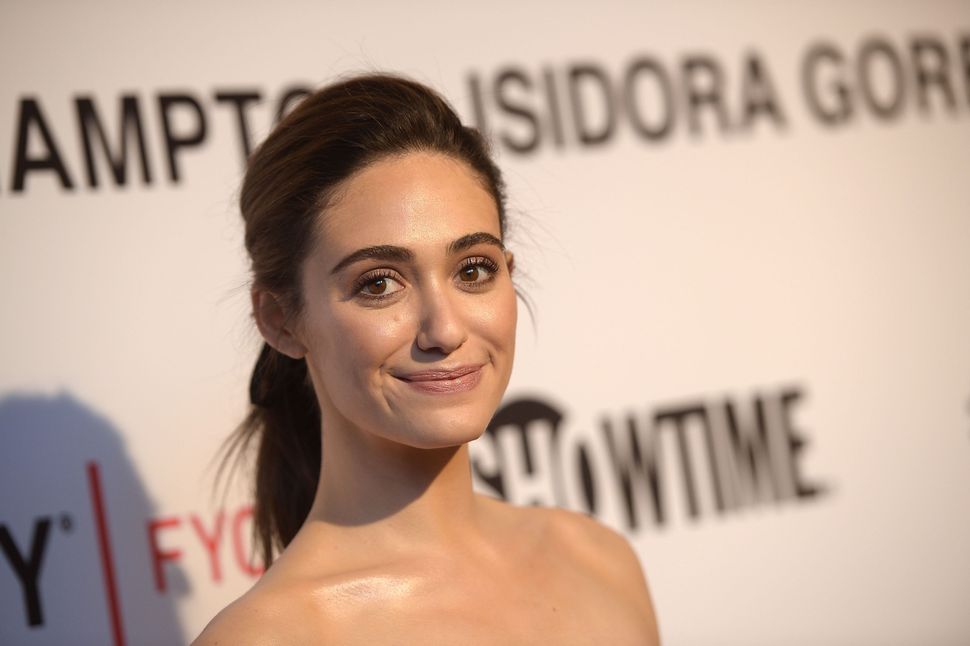 Emmy Rossum, perfect Jewish angel with a heart made of gold and hair made of doll-hair has announced that she will depart the Showtime comedy “Shameless.” Rossum, who has starred on the show alongside William H. Macy since 2011, wrote a moving letter to her fans on Thursday, explaining that soon she will leave the show she loves behind.

With the graciousness and attentive love that would make your grandmother stand up from her grave and shout “THAT’S WHAT I WANTED OUT OF YOUR BAT MITZVAH THANK YOU NOTES,” Rossum writes movingly about how “Shameless” has formed her as an actor and a person and given her a home. The comedy, which follows the sprawling Gallagher clan (Rossum plays the eldest child, Macy the messy patriarch,) is mirrored in the family created by its cast and crew, Rossum wrote.

“We’ve watched the kids grow up into the strong, talented, independent human beings that they are,” she reflected. Referencing the actors who play her younger siblings on the show, she wrote, “I taught Emma to shave her legs. I was there when Ethan learned to drive. Shanola and Jeremy and Joan and Bill danced at my wedding in New York last year. Our fearless leader John Wells thankfully held Sam and me up on those rickety chairs during the hora. I’ve spent the Jewish holy days in temple with David Nevins and his wonderful wife and kids. It really feels like a family.”

“The opportunity to play Fiona has been a gift,” she went on. “She is a mother lion, fierce, flawed and sexually liberated.” The outspoken feminist and committed Jew said that her time on “Shameless” has constituted the best eight years of her life. “Try not to think of me as gone, just think of me as moving down the block,” she wrote.

Oh, Emmy! Write all of our thank you notes and resignation letters. We wish you as many good things as you put out into the world.

Season 9 of “Shameless” will premiere on September 9 on Showtime.