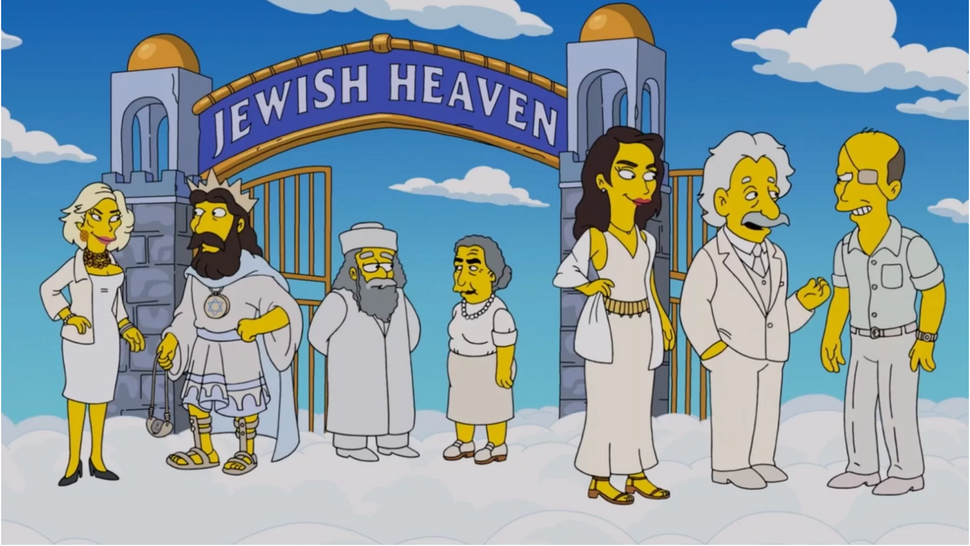 “Jewish Heaven” made its second appearance in “The Simpsons” on Sunday, as the Fox animation series began its 30th season with Bart having a near-death experience and claiming to have seen Jesus.

The show also featured Gal Gadot, with the Israeli actor playing herself playing Lisa Simpson in the movie version of Bart’s experience.

In the episode, three Christian film producers buy the rights to “Bart’s Not Dead” from Homer Simpson – with one sight gag showing that when Homer and Ned Flanders attempt to write the screenplay, Flanders’ main source of inspiration is the book “Christian Story Structure” by someone called Izzy Goldberg.

Gadot is also one of the Jews seen at the show’s “Jewish Heaven,” much to Bart’s surprise when he finally goes to meet his maker. Explaining her presence Gadot cheerily says, “They like me so much I get to visit.”

Gadot, who now joins a long list of actors and celebrities providing guest voices for the long-running series, is also voicing a character in “Ralph Breaks the Internet,” the feature film sequel to “Wreck-It Ralph.” It is slated to be released on November 2.

“Jewish Heaven” first appeared in the opening episode of “The Simpsons” in 2014, when Rabbi Krustofsky dies and Krusty visits him in a dream. That trip was a far lengthier one, with Krusty being taken on a tour of the celestial spot by none other than Rodney Dangerfield. As well as Jewish luminaries, “Jewish Heaven” also features the Joe Lieberman Presidential Library, Oys ‘R’ Us (“The whole store is a complaint department” says a sign) and Ebbets Field, where the Dodgers play the Giants.

In case anyone is now theologically confused by the concept of Jewish heaven, luckily the wise words of Rabbi Krustofsky are here to help. “There’s no Jewish heaven,” he told Krusty. “Our faith teaches us that once you’re dead, that’s it. Kaput. It’s dark. It’s cold. It’s like that apartment we lived in before I started doing weddings.”

Adrian Hennigan is a Haaretz contributor