Bette Midler’s got a big mouth. Sometimes, what comes out is gold. And sometimes, it’s just dreck.

The Divine Miss M landed in hot water yesterday afternoon when she tweeted: 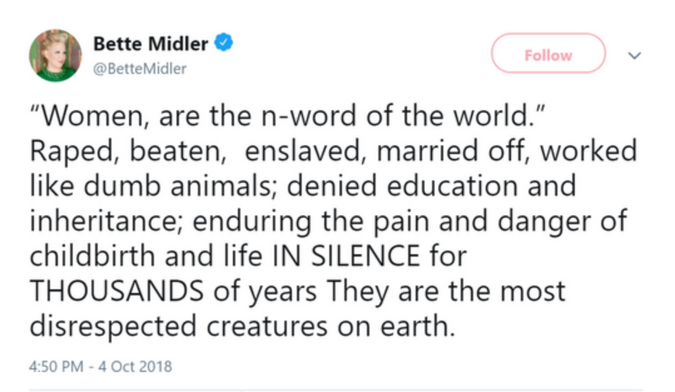 Midler’s fury and pain seem so genuine. But she also seems out-of-touch to the point of blithe, unconscious racism. The problem here: black women are women too. In a few strokes of the keypad, Midler’s tweet neatly erases the existence of black women and uses the history of black suffering as a prop. It’s what the kids are calling “white feminism.”

While we’re here, something that might have gotten lost in the Twitter jumble is that the most offensive line from Midler’s tweet actually comes from the song “Woman Is the N****r of the World,” written by John Lennon and Yoko Ono in 1972, based on a phrase Ono said during an interview two years before. Some scholars see this phrase as a bastardization of something a character in Zora Neale Hurston’s “There Eyes Were Watching God” said: “De n****r woman is de mule uh de world so fur as ah can see.” The evolution of the phrase, of course, separates black identity from female identity.

Did Bette Midler just erase me and millions of black women in the world!? When I tell people that feminism for most white women is just a fight for white women empowerment and not for all women. They think I’m lying. Look at this B.S!!???‍♀️ pic.twitter.com/PZqP4BR6T3

The gif says it best but we’ll try to add: racism and sexism must be overthrown together, or else feminism will just be another form of white supremacy.

Happily, Bette deleted the tweet and issued a thoughtful apology.

The too brief investigation of allegations against Kavanaugh infuriated me. Angrily I tweeted w/o thinking my choice of words would be enraging to black women who doubly suffer, both by being women and by being black. I am an ally and stand with you; always have. And I apologize.

We hope it was a growing experience for her. Remember — Bette Midler is 72! If she can hear critiques about her unconscious racism, apologize and learn, maybe there’s hope for the rest of us, too.